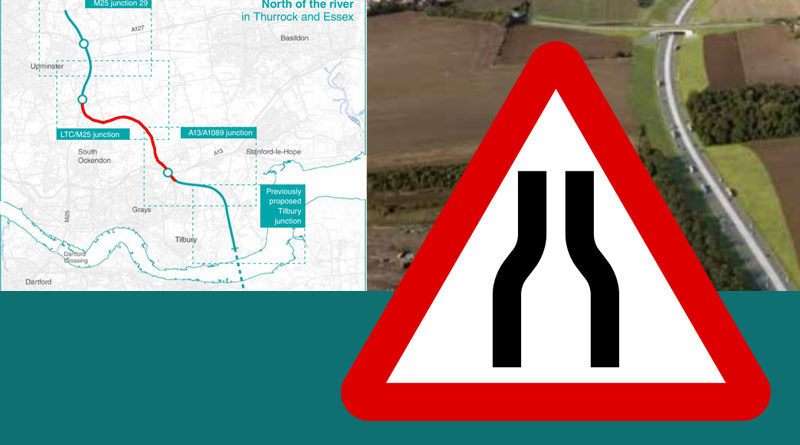 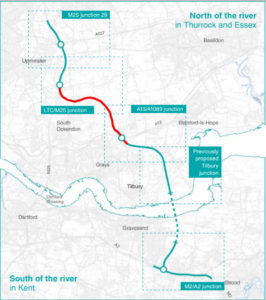 As of 29 Jan 2020 the proposed Lower Thames Crossing southbound from the M25 through to the A13 will be 2 lanes, not 3.   We have highlighted the section of LTC that would be just 2 lanes in a southbound direction in red on the map to the left, it’s a long stretch.

HE say their traffic modelling shows that only 2 lanes are needed, and that the change will reduce the routes impact, and still provide sufficient vehicle capacity.

Let’s stop a moment and consider why another crossing was originally being proposed.  To fix the problems that we all suffer with due to the Dartford Crossing, and it being the only river crossing in the area.

Ok so what happens when there is an incident anywhere on the M25 coming soutbound towards the Dartford Crossing from the LTC junction (yellow on the map below right)?  What will happen to the 5 lanes of traffic on the M25?  Where will it try to migrate to?

Well of course the only other option to cross the river in the nearby area, if LTC goes ahead, would be to migrate across from the M25/A282 (Dartford Crossing) to the LTC.

So 5 lanes of M25 trying to get onto 2 lanes southbound LTC between the M25 and A13.  Does that sound like a good idea to you? 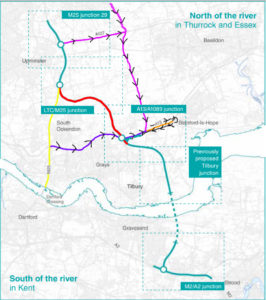 If the incident is at or closer to the Dartford Crossing traffic will try to cut down the A13 heading eastbound to the LTC (purple on the map to right), but there is no access to the LTC coming eastbound on the A13.

That traffic will need to detour down to the Stanford junction on the A13, go up and around the traffic lighted roundabout, and then head back westbound on the A13 to the LTC (orange on the map to the right).  The LTC is not accessible from the Orsett Cock junction on the A13.

Imagine the traffic is backed up on the M25 and struggling to get onto the 2 lanes of LTC southbound.

It may consider cutting off on the A127 and down the A128, or off at the A12 cutting down through Brentwood and onto the A128 (pink on the map to the right).  However, as already mentioned there is no access to LTC at the Orsett Cock junction, so again this traffic will all have to detour to the Stanford junction as outlined above (orange on the map to the right).

Some traffic may just try to cut through westbound off the M25 to use a London river crossing, much as they do now when there is an incident.  Others will try to rat run any which way they can in all directions!

Whichever way you look at it our roads will be chaos, and the congestion and pollution will not be good for anyone.

You can find info about this section of the LTC (M25 to A13) now being 2 lanes southbound on page 68 in the Supplementary Consultation Guide,