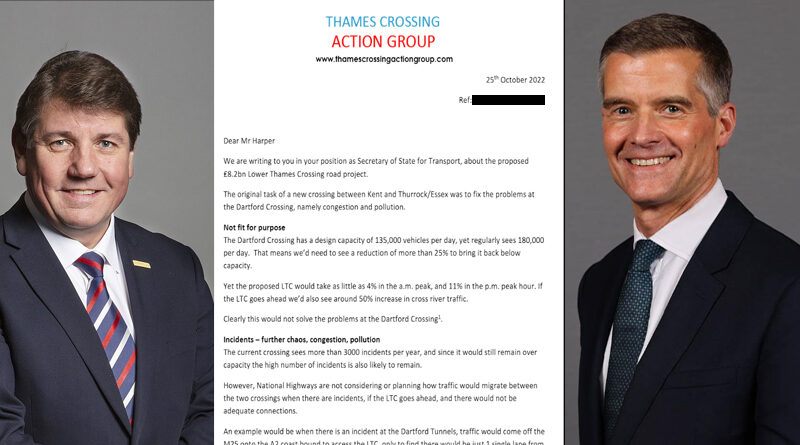 With the recent changes in UK Government, Thames Crossing Action Group (TCAG) have taken the opportunity to write to a variety of members of our government about the proposed Lower Thames Crossing (LTC).

This has obviously changed a few times recently, and at the time of each change we have sent letters to the relevant newly appointed ministers.  The list of who we have written to is now very long!  We have emailed shadow ministers, and other parties too.

The latest version of the letters

Whilst each letter has of course been addressed individually to each MP with some possibly slight variations the info and keypoints remained the same.  Here’s a copy of the letter most recently sent to the new Secretary of State for Transport, Mark Harper MP.


Responses to our letter

Daisy Cooper MP – Deputy Leader and Health & Social Care Spokesperson for the Liberal Democrats said:
“Liberal Democrats strongly believe in localism and devolving power to local communities and we have, therefore, consulted with elected Liberal Democrats councillors in the area who have stated that it is their preference for the Lower Thames Crossing scheme to be cancelled in favour of the money being invested in other infrastructure in Kent and Essex.”

Minister for Roads and Local Transport, Richard Holden‘s letter responding to letters we had sent to his predecessor and the former Transport Secretary can be found here.  Remember there have been a lot of letters flying about due to the all the changes in Government!

Send your own letters

Whilst we are happy to send letters on behalf of TCAG, and do so at every opportunity, it really does help if others send their own letters/emails to relevant people too please.

Please remember we are more likely to win people over and garner support if we send friendly and polite letters that cover the facts and evidence.  Thanks.  Together we are stronger!

We have also taken the opportunity to share a copy of our letter with our local MPs – Stephen Metcalfe, Jackie Doyle Price, Julia Lopez, Adam Holloway, and Louie French.

As we know the latest changes started taking place on 25th October 2022, including the announcement of Mark Harper MP as the new Secretary of State for Transport.

We are delighted that yesterday afternoon, 27th October 2022, Stephen Metcalfe MP contacted us to let us know he had a very brief meeting with Mr Harper in the evening on the 26th October.

He gave Mr Harper a copy of our letter, and suggested he read it.  He also suggested that he review the current proposal by NH to submit their DCO imminently, highlighting that they will lock in the various problems with the scheme.  Stephen is seeking a longer meeting with Mr Harper in due course, but he wanted LTC to be one of the first things on his desk.

We are grateful to Stephen for acting so quickly, and wait to hear what actions our other MPs might take.

We feel it is important that National Highways at very least hold off attempting to resubmit the LTC DCO application until after such meetings and debate have taken place.

Remember, back in March 2022 Adam Holloway MP held an LTC Adjournment Debate, which Stephen, Jackie, and Louie all attended.

In Oct 2022 Stephen Metcalfe called for an urgent debate on the LTC in Parliament. We are waiting for a further update on that.

In Nov 2022 Jackie Doyle-Price wrote to the Transport Secretary calling for the LTC plans to be ripped up.

At the reconvened September Thurrock Council Cabinet meeting which took place on Oct 12th  Cllr Fraser Massy, LTC Task Force Chair presented his report to the Cabinet.  After Cllr Massey’s report new Leader (then acting Leader) of Thurrock Council, Cllr Mark Coxshall thanked Cllr Massey for his report, that he looked forward to the next one, and told us (Task Force) to “Give them Hell”!  You can see us do just that at the October LTC Task Force meeting!

We are also pleased to hear that Ian Wake who has previously voiced strong opposition to the proposed LTC.  at the TCAG LTC Grays protest, and at Tilbury Cruise Terminal, has been announced as the newly appointed Acting Chief Executive at Thurrock Council,