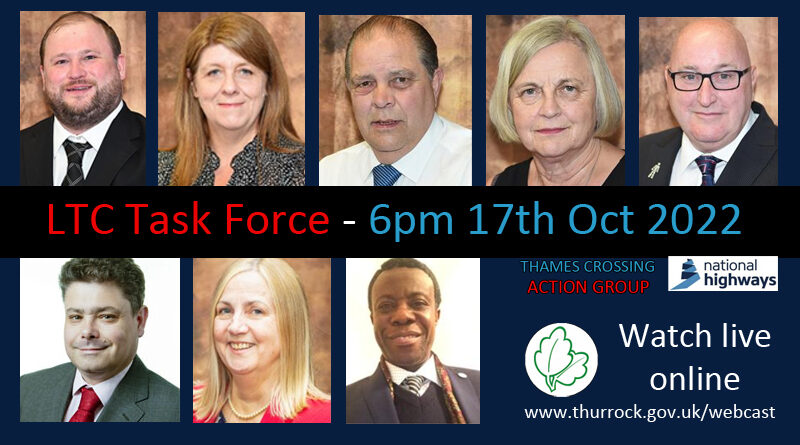 The October 2022 LTC Task Force meeting took place on Mon 17th October.  This meeting acted as the rescheduled September meeting, which was postponed due to the death of Queen Elizabeth II, therefore the agenda for this meeting can be found here.

The meeting was webcast live and has also been shared on the council’s YouTube channel (we’ve embedded a copy below), and our update covers some of the highlights.

The presentation given by National Highways covered some of the key points of the Local Refinement Consultation, presumably because we didn’t get the usual consultation presentation, since they chose to hold the consultation during the local elections purdah period when council meetings do not take place.  So nothing new in that part of the presentation.

They then covered details of engagement between NH and Thurrock Council.  The list shows how many meetings the council attend with NH, but as we know all too well, that doesn’t mean that it can necessarily be considered as meaningful engagement from NH.

There were lots of questions from members of the Task Force, and we took the opportunity to ask as many as we could in the time available.  Yet the general consensus was that National Highways were again, as always, doing their best to avoid answering questions and to actually provide us with the info and details we were all asking for.

Simple questions like what is the current estimated cost of the proposed LTC, since we all know the cost of everything is rising, could not be answered. Neither could other questions relating to the economics of the proposed project.

We also quizzed them on the safety aspect of the proposed LTC, and the fact it is a ‘smart’ motorway by stealth.  We all know the dangers of ‘smart’ motorways, and we know that part of the problem is the control centres that monitor and serve them have outdated tech that doesn’t work, and not enough staff to monitor the tech.

The fact NH stated the ‘smart’ tech for LTC would be integrated into the existing control centres that are already struggling and failing just adds to our concerns.  Especially when we have just heard again of a 7 hour outage of ‘smart’ motorway tech.  Another one of the many concerns we are raising with Government, and we know that our new Prime Minister, Rishi Sunak has stated publicly that he wants to scrap ‘smart’ motorways.

We also learnt that following on from Thurrock Council seeking a copy of the LTC Outline Business Case (OBC) via a Freedom of Information (FOI) request, and NH refusing it, the Information Commissioners Office (ICO) had found in the council’s favour and that NH should release the requested OBC.  During the meeting we were told that NH were considering whether to appeal this decision or not.  We understand that they have now decided against appealing and will be publishing the OBC on the NH website very soon.

The council said they will look at submitting the remaining questions we all had to NH in writing requesting a prompt reply. Watch this space!

One thing to come out of the meeting is that the council had been advised by the Planning Inspectorate (PINS) that National Highways were aiming to resubmit the DCO application on or around the 28th Oct 2022.  PINS had also advised us of the same info.

Yet in the meeting the National Highways representative stated their aim was to resubmit in the first two weeks of Nov.

Whilst we acknowledge that the 28th Oct is very near the end of the month, and PINS did say on or around, NH are clearly out to add to the confusion by saying during the first two weeks of Nov, and not mentioning 28th Oct.

When it is resubmitted obviously remains to be seen, but what we are sure of is that NH continue to mislead people.

TCAG have a DCO 2022 Updates Index page on our website, which includes an update on the DCO process.  We were also given an overview of the process in the Task Force meeting.

Some of us nearly fell of our chairs when we were told there was an update on the Health Impact Assessment. However, that was sadly short lived as we were informed that it was sort of an update.

Info the council have been asking for on things like air quality, noise assessments, health impact assessments are all still being refused by National Highways, and will not be shared with the council until the DCO documents are released.

The council have been given 3 DCO briefings.

One on things like cultural heritage, biodiversity, water environment etc was said to be relatively satisfactory.

The second, on noise and air we were told was not very satisfactory.

And the third, on climate and carbon, which we were told was not entirely clear on what the impacts were or what the mitigation was.

We were also told that what had been shared in the briefings had actually generated more questions than it answered for the council’s LTC technical team.

So all in all, whilst the council’s LTC team are working very hard and doing their best to get the relevant and much needed info, National Highways are still refusing to share important LTC info.