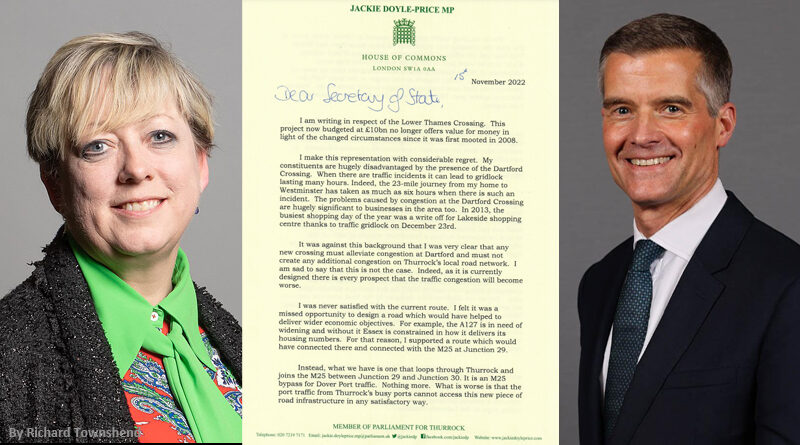 Thurrock MP, Jackie Doyle-Price has written to the Transport Secretary, Mark Harper MP saying that the proposed Lower Thames Crossing plans are past their sell by date, and that he should “rip it up and start again”.

She also comments that the project no longer offers value for money, and she believes it would likely make congestion problems worse if it goes ahead.

If you are having any issues with viewing the letter above it can also be downloaded as a pdf file here.

We are grateful to Jackie for writing to the Transport Secretary like this, and voicing the concerns and evidence of the Lower Thames Crossing’s failings so strongly.  We also appreciate the fact that she chose to share this letter publicly.

Of course we agree with her assessment that the proposed LTC would not solve the problems at the Dartford Crossing, and that it would actually make things worse.  At £10bn+ and the fact it is not fit for purpose, the LTC most definitely cannot be considered value for money.  We totally agree with Jackie that the LTC plans should be ripped up. We need and deserve better.

We hope Mr Harper will take note of Jackie’s letter, and look forward to learning of his response in due course.

Ms Doyle-Price is also standing for the position of Chair of the Transport Select Committee.  Her candidate statement includes things such as:

“We must of course make sure that those organisations delivering transport services are held to account so that we achieve the best services for users and value for money for taxpayers. That is a given.”

and “I would also wish to bring challenge to National Highways to examine its role and powers and how it interacts with local transport and planning.”

As a group we again agree with these sentiments, and we too feel that National Highways should be held accountable for their actions.