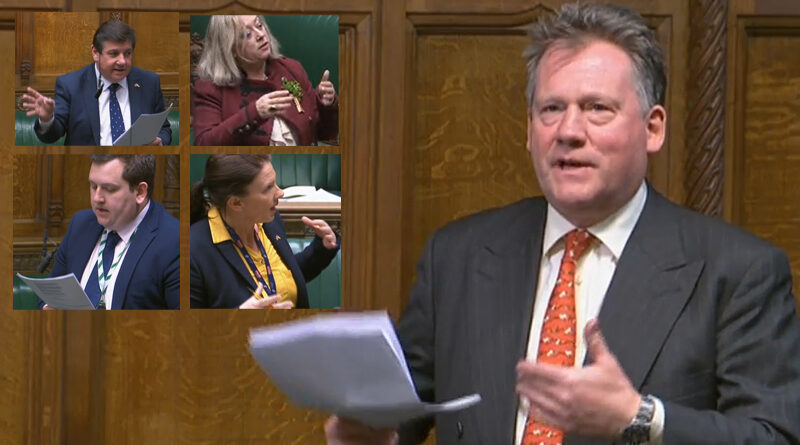 We would like to thank Adam Holloway MP for Gravesham for calling an Adjournment Debate on the proposed Lower Thames Crossing, which took place in the House of Commons today, 24th March 2022.

We would like to also thank Stephen Metcalfe MP for South Basildon and East Thurrock, Jackie Doyle-Price MP for Thurrock, and Louie French MP for Old Bexley and Sidcup for attending and taking part in the debate.

If you prefer to read, then you can also read the minutes of the whole debate here.

We felt all spoke very passionately and got great points across on how the proposed LTC will not solve the problems suffered due to the Dartford Crossing, is a huge amount of public money to be spent, how destructive and harmful it would be, and many other important factors.

We appreciate Adam’s mention of Bob Lane’s work, and also Stephen’s acknowledgement of TCAG.  Many have and are working hard in the fight against the proposed LTC and together we are stronger! TCAG would also like to thank Robin Bull for his help too.

We wish to extend our sincere thanks to Adam, Stephen, Jackie, and Louie.

We have emailed LTC to ask if they will be posting updates about the LTC Adjournment Debate on their social media channels and website.

We very much doubt they will want to, as they seem to prefer biased PR greenwash propaganda.  So we’ve also asked if not then why not, since MPs debating LTC is obviously very relevant to the proposed LTC project.

Update 6th April 2022 – We have this afternoon received a response from NH/LTC saying that they do not intend to share such info.  No explanation as to why not, but I think we can all guess why not!  We have followed up to point out that we had asked for an explanation. If we receive any further response we will again update.

Update 7th April 2022 – We received a further reply from NH/LTC in response to our email asking for an explanation as to why they wouldn’t be sharing details of the LTC Adjournment Debate on their website and social media channels. They are after all quick to share details when MPs and others are supporting LTC!  Surely we deserve unbiased information, not confirmation bias.

“As communicated in my previous email the debate was hosted by Parliament.tv. It was also referenced on the BBC website. We’ve noted your comments.”

Needless to say we we’re not surprised!

Read what was said in the LTC Adjournment Debate – click here