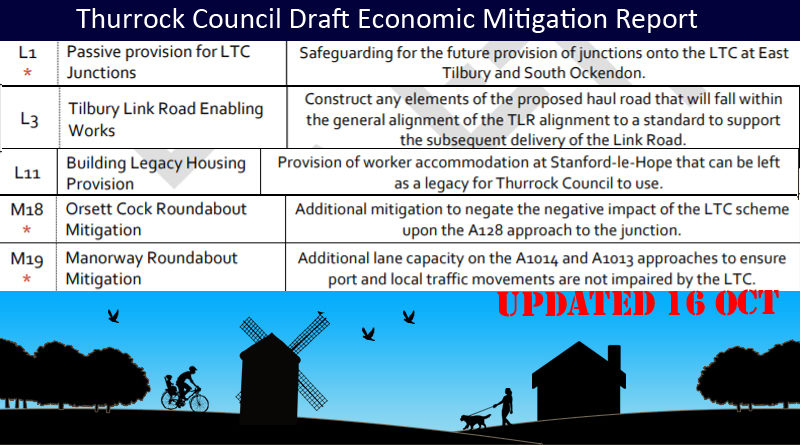 The October 2020 LTC Task Force Meeting will take place on Mon 12th from 6pm.  We have now been provided with copies of the two Thurrock Council draft reports that will be discussed during the meeting.

We feel that people may have some questions in response to these draft reports, so please have a look. If you do have any questions please email them to admin@thamescrossingactiongroup.com and we will do our best to raise them during the meeting, or via email after if need be and then share the responses.

Please do bear in mind that the council’s LTC team have been working hard on these drafts and this is about bringing them to the LTC Task Force as soon as they can, as a work in progress, and that the meeting is about presenting and discussing the draft reports.

Thurrock Council commissioned Hatch to undertake an assessment of the local economic and social costs of the LTC, with their initial findings presented within the ‘LTC Economic Cost Study’ (Feb 2020).  You may remember we published this update at that time.

Hatch have subsequently worked with the Council to produce an overall package of schemes and interventions that are considered to adequately offset the identified economic and social costs of the LTC within Thurrock.

As part of its technical engagement relating to the LTC Development Consent Order (DCO), Highways England has issued a draft of draft technical documents to the Council for their comments. These documents have not been made public and have only been shared with the local authorities potentially affected by the LTC scheme. The Council’s Public Health Team have provided responses to these documents where relevant. A summary of the Public Health Team’s response and concerns is summarised in section three of this paper, which can be viewed here.

Since we are not able to view the draft of a draft document that the responses have been made it makes it very difficult to share much more on this at this stage.  But from what can be read in the summary by the Council’s Public Health Team seems to be that in their opinion what has been shared is either not adequate, and/or what is being proposed is not adequate either.

We have also been told that in light of the fact it is highly likely that Highways England will be submitting their Development Consent Order (DCO) application on Fri 23rd October 2020, Thurrock Council deem it necessary to expand their consulting team.  To ensure that the person chosen was familiar with the LTC project and the Council’s position on it, Thurrock Council have taken advantage of the fact that Chris Stratford, who was part of the LTC Stakeholder engagement team, left HE at the beginning of the Summer, and taken him on to add to the consulting team.  The DCO process will involve a ridiculous amount of pages of documentation, all of which will need to be studied, understood, and responded to during the strict process timeline. Chris is evidently already making a big impact in supporting council officers through the DCO engagement process. Chris obviously has much knowledge of the LTC scheme, so we hope that this will be beneficial to the Council’s response to the DCO process.

Chris will be in attendance at the Oct LTC Task Force meeting in his new role for the council’s consulting team.

Here is a copy of the feedback we sent to Thurrock Council in response to their Economic Mitigation List.

To find out more about the DCO Process and how to sign up for official updates from the Planning Inspectorate, includng how to register as an Interested Party so you can continue to have your say click here.