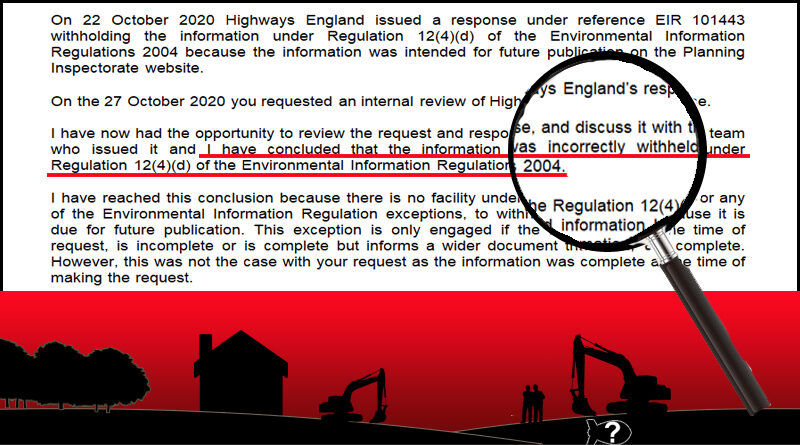 Following on from the recent news that HE withdrew the LTC DCO application apparently because they were unable to provide the Planning Inspectorate with adequate info, we have now received further evidence of HE wrongly withholding info about Unexploded Ordnance (UXO) to us.

You may remember the previous concerns about Unexploded Ordnance/bombs (UXO), especially whilst investigative works are being carried out.  We put in a Freedom of Information (FOI) request for further info, since HE had refused to share any info to reassure concerns, which they refused on the basis that the info would made available in their DCO documents when their application was accepted.  As we know that has since been withdrawn as they were unable to provide adequate info to the Planning Inspectorate.  We requested a review of their decision to deny our FOI request.

Today, 25th Nov 2020, we have received a response from HE’s FOI Officer who carried out the review.  He has reviewed the request and response, and discussed it with the team who issued it and he has concluded that the information was incorrectly withheld under Regulation 12(4)(d) of the Environmental Information Regulations 2004.

Yet another example of HE’s inadequacies and attempts to withhold info that should have been shared.

We have now been sent a 198 page document on UXOs that we can now review, along with an apology.

Why we wanted further info on UXOs

Obviously we are keen to gather as much info as possible on all aspects of LTC. However, the reason for us putting in the Freedom of Information (FOI) request was specifically because of serious concerns about the LTC investigative works being carried out.

Quite understandably residents whose homes are next to the investigative works sites are very concerned about the risk of UXOs whilst these works are being carried out.  Local knowledge highlighted that there was a very real risk of UXO in the area. Here is a map that shows some known bomb craters in the area marked by red stars.  Bombs would often get dumped on the way back out from London and targets. This image was created using knowledge from local residents who lived next to this area through WW2, so know first hand where the bomb craters were.  As you will see there is a clear distance/pattern between craters apart from the missing one which could represent a UXO.  This is just part of the local knowledge we have gathered, so you can imagine if you were living next to this location and knew HE had LTC workers carrying out investigative works you would have some serious concerns. 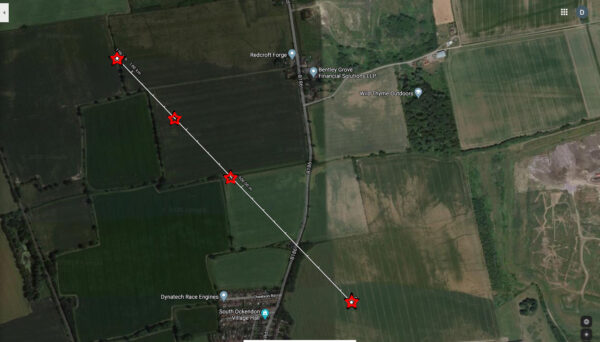 We learnt that one bomb went off near Hall Farm, South Ockendon which impacted the area so greatly that it blew out the windows and damage can still be seen in Townfield Cottages in North Rd.

Zetica who HE have used for their UXO surveys have a free knowledge base on their website which showed the areas in question as being moderate to high risk for UXOs (see below). 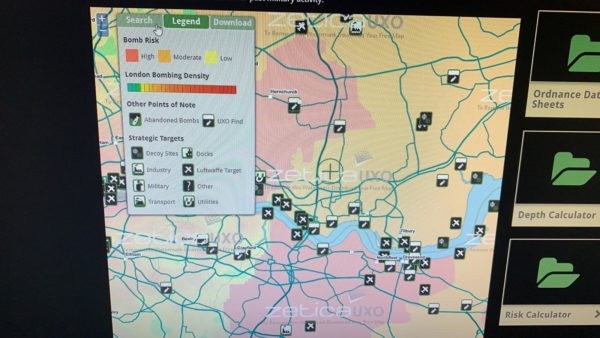 To date HE had only released extremely limited info on UXOs back in the 2018 consultation documents (seen below). 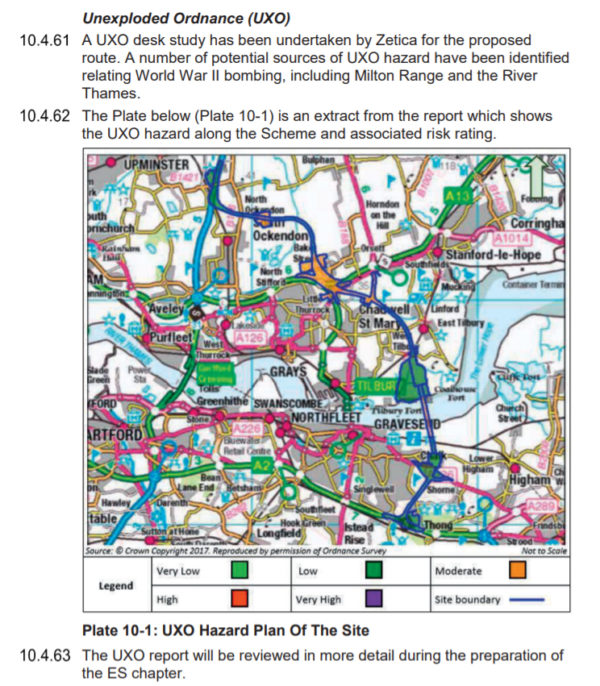 Yet despite us, residents, and a local councillor explaining the stress it was causing residents, and the need to provide evidence to try and reassure everyone HE refused to share any further info.

Whilst all this has been going on LTC workers on an investigative works site in Gravesend, Kent made a digging location error which resulted in damage to the outside of a Gas Mains pipe.  HE’s response to us was that this showed their safety procedures worked!

We are of course happy and relieved that that incident wasn’t worse than it was, although it did obviously cause some concern to residents in the area. However had the same thing have happened and it had been a UXO instead of a Gas Mains pipe being hit, we can’t see that any amount of safety procedures would have been enough, as obviously UXO when disturbed can easily detonate with unthinkable outcomes.

Residents have been extremely stressed and concerned having LTC workers digging on investigative sites in areas known to have UXO risk.  Having to live literally next to a site where LTC workers have been digging not knowing what might happen next.  Since in one of these locations in South Ockendon had numerous other serious concerns relating to the site, it certainly offered residents no reassurance whatsoever.  We felt it more than reasonable to ask HE for evidence and reassurances for those residents to try and help ease the stress it was causing.  HE withholding the info when we requested it as a Freedom of Information request was just another example of HE’s complete lack of care of concern of the impact they are having on people’s lives, health, and well-being.

We are pleased and relieved that the FOI officer that reviewed our FOI request has come to the same conclusion as us about HE wrongly withholding info.  We will now be reviewing the provided info and sharing with the concerned residents, who have had to endure months of stress whilst this has been going on.

The letter from the FOI Review Officer – click here

UXO concerns in regard to investigative works – click here