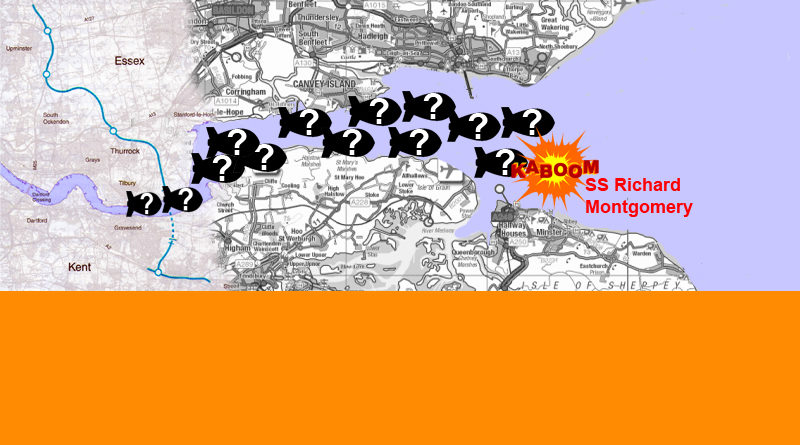 There all sorts of concerns about the proposed Lower Thames Crossing.  As many know unexploded ordnance (bombs) can be a huge concern when it comes to the areas the proposed route passes through, including the River Thames itself.

Peter M. Haddock (MA.,MBA.,Dip.SM.,MIIRSM.,jsdc) recently got in touch with us to share some of his vast knowledge on the subject, and his serious concerns over what could potentially happen unless extreme care is taken.

Mr Haddock has spent the past 50 years, extensively researching unexploded ordnance in the Thames Estuary.  In 1974, he served at Maplin Sands, when thousands of tons of WW1, WW2 and other ordnance was removed from the sands for the then proposed Maplin Airport.

He also grew up within 10 miles of the SS Richard Montgomery, located offshore at Sheerness.

He states that his biggest concern was the unexploded V1 & V2 vengeance weapons, fired at London.  Hundreds of the weapons fell into the river Thames and sank into the soft clay without exploding.  He has located maps showing where and when these weapons entered the Thames in an area between Southend and Sheerness and up river to the site of the proposed Lower Thames Crossing.

These maps show hundreds of black dots representing each of the V1’s & V2’s, which are still lying in the Thames mud.  Mr Haddock is unable to share his maps with us at the current time, but will do as soon as he is able.

He also suggests we should also consider the concept of sympathetic detonations, whereby a direct strike on one V1 or V2 could set many others off causing a tremor, which could affect the Richard Montgomery and the rest of the ordnance still located under the Maplin sands.

If this were to happen, Southend, Sheerness, the River Medway could be destroyed with a massive tidal wave surging to London itself.

For those that might not know The SS Richard Montgomery was a cargo ship built in Florida to carry vital supplies for the war effort, in World War 2.  It was wrecked off the Nore sandbank in the Thames Estuary, near Sheerness, England in August 1944, whilst carrying a cargo of munitions. Around 1,400 tonnes (1,500 short tons) of explosives remain on board.

We have to agree with Mr Haddock’s closing statement to us that he hopes that whoever does the risk assessment is aware and fully competent in advising with regard to the proposed Lower Thames Crossing.  Of course when we have asked HE about risk assessement of unexploded devices in the Thames and indeed on land, since as we all know there have been plenty of them found over the years, they tell us that they have specialist experts working on this, and it will all be ok!

On page 188/305 in the Environmental Impact Assessment Scoping Report (Oct 2017)  you will find a very short section referring to Unexploded Ordnance (UXO). It states:

Is it just us or are the higher risk areas all where they are proposing the most complex involved works?! Like the tunnel section, and the huge sprawling A13 junction!?

Does it strike anyone else as strange that the area between Coalhouse Fort and Tilbury Fort is rated as green, low or very low risk!?  Both forts were of course in use during the World Wars, so obvious targets.  The LTC/M25 junction area is another area you would think would rate higher than low or very low risk, due to it’s close vicinity to the aerodrome at Hornchurch.

I am sure we all know of instances of UXO being found in various locations including in the river, we’d say the risk is likely high or very high in most areas.

We did a quick online search for Zetica and came up with this https://www.zetica.com/services/unexploded-ordnance/uxo-risk-assessment/ We have emailed HE to ask if this is the company they used, and whether the findings above are simply the result of one of Zetica’s free preliminary desk studies.

We’re not sure what would be worse the fact HE may have only done a free preliminary desk study on this, or the poor quality of the info if HE have paid for the chart above!  Regardless of whether it has been paid for or not, we certainly don’t feel it is adequate info to provide the public when considering a £6.8bn+ project, and neither do we consider it to be clear or truly informative. Let us not forget they have a legal obligation to provide us with clear and informative consultation materials!

The ES they refer to is the Environmental Statement. This will be published as part of their Development Consent Order (DCO) application.

We would also point out that in many of these areas, such as where the northern tunnel portal will be, noise and vibration levels during construction are reported to be high, adding further concerns, since heavy vibrations near to UXO is not usually a good combination!

We will share any response and further info we get from HE on this topic on here as and when we receive anything from them.