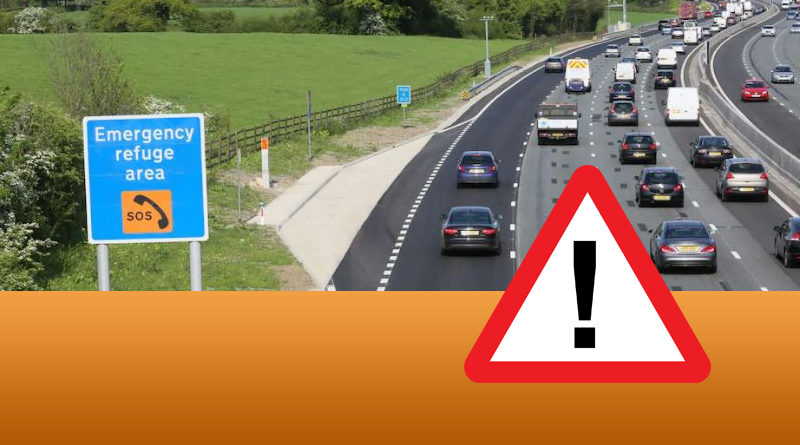 Starting on page 9 of the consultation guide (page 5/53 if you’re going by the pdf pages on the online version of the guide) they list some ‘Additional updates’ which includes LTC road standard and safety.  You probably won’t be surprised to read that we are not impressed by what we read!

Road Standard and safety
In this section they state that the LTC would be defined as an all-purpose trunk road.  They say this means that green signage as opposed to blue signage would be used! However, they go on to say that whilst all-purpose trunk roads are usually accessible for all vehicles, there would be a restriction so only vehicles allowed on motorways would be able to use the LTC.  They say this is because it connects into existing roads that can only be used by motorway traffic.

Our response to that would be why do they not define it as a motorway then?

Could it be that if they defined it as a motorway we would then be referring to it as a ‘smart’ motorway, and they are trying to avoid the bad reputation ‘smart’ motorways have?  Or is there another reason?  One of the many questions we are asking HE/LTC!

At the end of the day though we’re sure that many will share our serious concerns over safety regardless of whether LTC is referred to as a ‘smart’ motorway or a ‘smart’ all-purpose trunk road.

It is clarified that LTC would operate as an all-lane running trunk road, where there is no hard shoulder (with the exceptions of sections of the A13 interchange where lane drop/lane gain arrangements are introduced).  The lane drop/lane gain blurb means when there are for example 3 lanes and a sliproad goes off, the road drops to 2 lanes until the next slip road back onto the road merges. Hope that makes sense! In the blurb they are saying that in that section on the A13 interchange there will be a hard shoulder section.

They state that the LTC would be guided by industry standards. It would include emergency areas spaced at intervals of between 800 metres and 1.6km (1600 metres), with the exception of the tunnel where enhanced operational and technology measures would be used.  They say they are assessing the feasibility of spacing emergency areas at intervals of 1.2km (1200 metres).

The only way to try and find out where the Emergency Areas might be is to hunt through Map Book 3: Engineering Plans and see if you can spot EA to locate them along the route. Not an easy task and hard to judge the distances too. We have requested details of locations and distances of EAs from HE/LTC numerous times previously and to date we have not been provided adequate info.

We’ve highlighted them in red in the image below as an example of what you need to be looking for.

It is also worth remembering that LTC between the M25 and A13 southbound is proposed to be just 2 lanes, we highlighted the indicator of this in the image above in orange (this is all the way along the LTC from the M25 to the A13 southbound). Imagine breaking down along that stretch and not being able to get to an EA, there would be only one other lane for traffic to move into to avoid hitting you, and stretches along that section are also viaducts.

The original spacing between Emergency Refuge Areas for the first trial smart motorways was 600 metres, yet some of the sections that followed only have ERAs every 2.5 miles.

There is also the concern that even if you can manage to get to an ERA that it may already be full. There have also been times when HGVs have been witnessed blocking the ERAs while they have their rest breaks.

HE’s own data says that:

And that’s if the tech is installed and working correctly, many stretches of exisiting smart motorway doesn’t have full tech installed, and/or the tech has be out of action for extended periods.

We do not feel that there is anything smart about ‘smart’ motorways, and we consider them to be extremely dangerous. We do not feel that the info HE have provided regarding the locations of, or the distancing between the Emergency Refuge Areas to be adequate or acceptable.  We also have particular concerns over the viaduct sections of the proposed LTC.

We will be putting a lot more questions to HE/LTC on this aspect during the consultation.

Please click through and read the articles below which we think might be of interest on this topic.

Our update on ‘Smart’ LTC from Feb 2020 – https://www.thamescrossingactiongroup.com/ltc-smart-motorway/

Our update on the ‘Smart’ aspects of LTC from March 2020 – www.thamescrossingactiongroup.com/smart-ltc-aspects-of-safety/

If you want to know more about using smart motorways click here to read the UK Government’s guidance.

How to have your say

We would suggest using ‘Q4. – Other comments’ in the consultation response form for your comments on LTC road standard and safety.

Remember you don’t have to use the response form you can submit your own response in your own format/words via email or letter if you prefer, see below.

Please only use the following official response channels. It cannot be guaranteed that responses sent to any other address will be included in  analysis.

Fill in the online survey at: www.lowerthamescrossing.co.uk/design-consultation
NB the survey will be available from 00:01 Tues 14th July – 23:59 Weds 12th August 2020

Post your response form or your own comments to: FREEPOST LTC CONSULTATION
(The Freepost address is the only text needed on the envelope, and no stamp is required.)

Email
Email your comments to: LTC.CONSULTATION@TRAVERSE.LTD