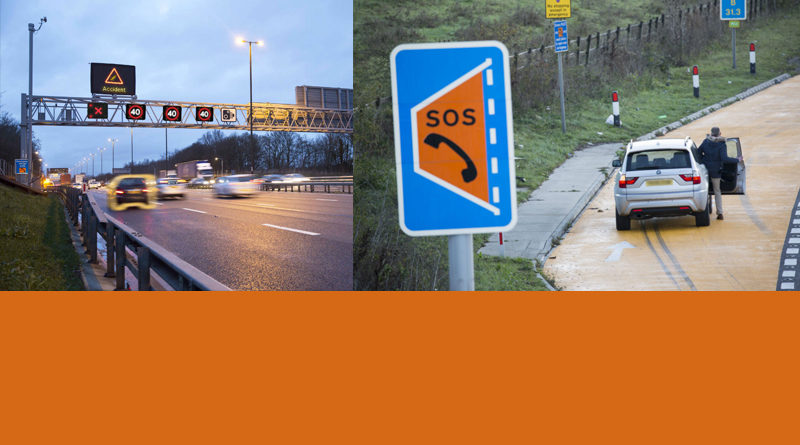 With ‘Smart’ Motorways being very much in the news at the moment, and rightly so, we wanted to know more about this aspect to the ‘Smart’ LTC.  We have already published an update – www.thamescrossingactiongroup.com/ltc-smart-motorway/ , but we had more questions we needed answers to, so we asked HE:

Clearly recent media coverage shows that the Government has concerns over the safety standards of ‘Smart’ Motorways, so this is something we can all express our concerns on and comment on in our consultation responses.

We managed to get clarification as to what a hard strip was compared to a hard shoulder yesterday at an info event.  A hard shoulder would be a 3 wide lane, a hard strip is just a 1m strip on each side of the lanes, on the edge and in the central reservation.

If you dig deep enough and look at Map Book 3 – Engineer Plans you can search for Emergency Areas marked EA on the plans.  It takes a bit of searching, and again the plans are not always clear and easy to ideintify where you are, and orientation of each plan varies so keep an eye on which direction North is pointing to try and get your bearings.

At the event we also asked specifically about ERA/EAs or any kind of safety features on viaduct sections of LTC, such as over the Tilbury Loop Railway line, and across the Mardyke.  Obviously anywhere on a major road like LTC would be busy, but viaducts without hardshoulders become an even higher risk because you can be exposed without anywhere to offer you any protection in the event of an incident when you need to stop on the road.

There are Emergency Areas near-ish to the viaducts over the Tilbury Loop Railway line, and over the Mardyke, but what about if you end up having to stop on them? We have been told there should be some kind of parapit/balcony for safety created on the viaducts when neccessary.  Of course we want more reassurances and details on that.

We are currently trying to find out when the last update was with regard to predictions of accidents for LTC, and other road safety data, and will update again as we can clarify anything.