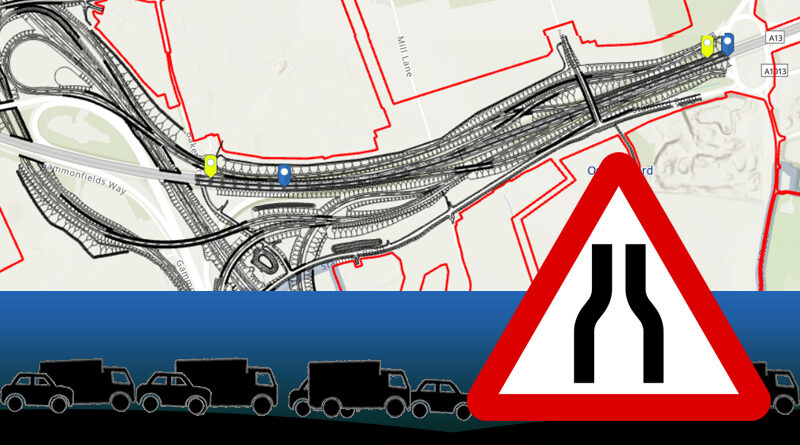 We have known for sometime now that the proposed Lower Thames Crossing would generate an A13 bottleneck, if it goes ahead.  Sections of the A13 in both directions would drop to just 2 lanes of through traffic on the A13.

However, as we have previously highlighted, if Highways England are granted a DCO for the proposed Lower Thames Crossing, with the current design, it would mean a section in each direction would result in a bottleneck section of just 2 lanes.

Look at the evidence

NB. Highways England only detail the number of lanes to the west of the Orsett Cock roundabout. 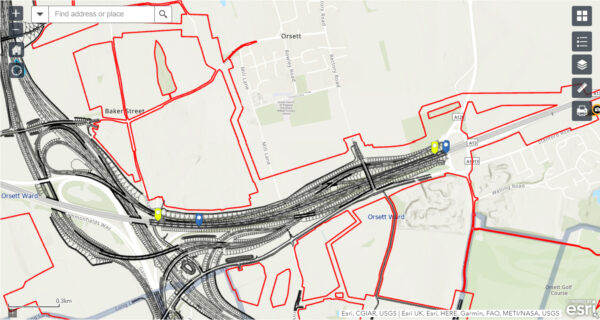 The maps above are screen captures taken from the LTC interactive map.  On that map you can zoom in and actually count where the lanes drop.

The lanes are also detailed in Map Book 1 – General Arrangements.  You will need to look at the map of Sheets 26 and 29 and again zoom in to count the lanes.

The sections are around 1 mile long, which isn’t a huge length, but it more than enough to cause traffic flow issues, on an already busy stretch of the A13.

This issue was highlighted by HE in 2020 on pages 54 and 55 of the Supplementary Consultation Guide.  It simply referred to as ‘Point 7 – The A13 eastbound has been reduced to two lanes from four lanes, near the Orsett Cock roundabout. This removes the need for drivers to change lanes on the A13.’

Note how it only referred to eastbound, despite the fact that maps then and maps now show that the A13 would drop to 2 lanes in both directions for a section.

This is still an issue and concern of the LTC today, as can be seen when you review the Community Impacts Consultation General Arrangements map.

HE will say that it is to do with industry standards of dropping lanes when you have a filter lane and/or slip road leaving, and then it is added again as the next slip road joins the main route. It may be considered industry standards to HE, but we call it a bottleneck and a serious concern!

There would also be extra traffic on the A13 and Stanford junction due to the Stanford Detour that the LTC would inflict upon the area.  So all in all we can expect to experience more issues, congestion and pollution on and around the A13 if the proposed LTC goes ahead.