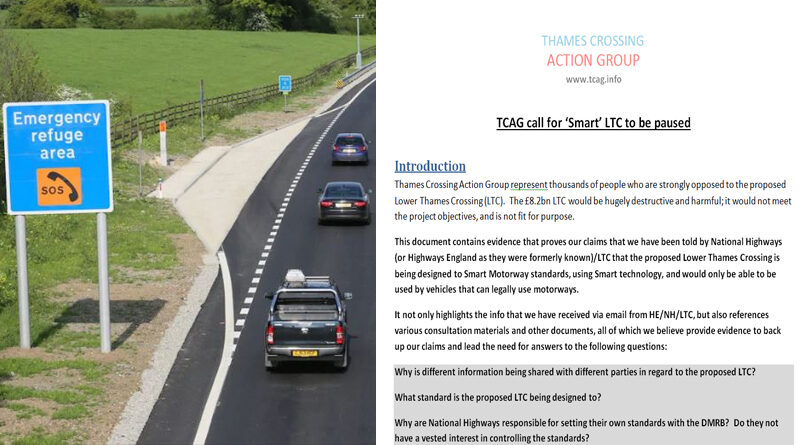 TCAG have contacted various government representatives and bodies to call on them to pause the proposed ‘Smart’ LTC in line with the Government announcement that new ‘smart’ motorways have been paused.

On the 12th January the UK Government announced that the roll out of Smart Motorways had been paused, following recommendations from the Transport Select Committee, whilst 5 years of safety data is collected and analysed.

Taking all the evidence into account, TCAG have emailed the Secretary of State for Transport, Grant Shapps, National Highways Chief Executive, Nick Harris, the Transport Select Committee, the Office of Rail & Road, and various others at the Department for Transport  calling for the proposed LTC to be paused due to the fact it is being designed to Smart Motorway Standards.

In response to our first email sent on 13th January 2022 we have received the following responses:

Stephen Metcalfe MP has acknowledged our email and said he is writing to the Secretary of State for Transport to ask him to address the very valid point we have raised. (17 Jan 2022)

Jackie Doyle-Price MP has acknowledge our email, said the contents have been noted and hopes we get a reply soon. (18 Jan 2022)

Thank you for your email of 13 January to Nick Harris, Chief Executive of National Highways, regarding the above scheme. As the Lower Thames Crossing falls within my area of responsibility, Nick has asked me to reply to you personally on this matter.  I note your comments regarding the Government’s decisions following the Transport Select Committee’s recommendations.

I would like to assure you that safety remains our highest priority. The new crossing will be an all-purpose trunk road, similar to the A13 and other A-roads in the region that are used by tens of thousands of people every day. The Lower Thames Crossing is being designed to the highest standards recommended today, but we will continue to adapt our plans to incorporate advances in safety design and technology that will come forward in the years ahead. While the crossing is designated as an A road we will of course be reviewing the Government’s announcement and considering any changes we may need to make.

We then emailed again on 24th January 2022, including more info on what we had been told in regard to LTC being designed to smart motorway standards etc, and received the following responses:

On 25th Jan we got an acknowledgement email from Nick Harris’ office stating:

Thank you for your follow up email of 24 January to our Chief Executive, Nick Harris, about Lower Thames Crossing

National Highways aim to respond to you as soon as possible, however please note this may involve further investigations with a number of departments in order to ascertain an informed response. Whilst the maximum response deadline is 10 working days, they will endeavour to respond sooner.

On the 2nd Feb, Stephen Metcalfe sent us a copy of the reply he had received after contacting the Minister of Roads, Buses and Places, Baroness Vere of Norbiton regarding our email.  In her reply she stated:

National Highways has confirmed that the LTC is being designed as an All Purpose Trunk Road in line with the principles set out in the Design Manual for Roads and Bridges (DMRB), specifically the ‘Requirements for new and upgraded all-purpose trunk roads (expressways), GD300. As set out in the DMRB, an expressway is a high-speed dual carriageway that has at least two lanes in each direction, grade separated junctions, and uses technology to support operational regimes. The LTC has not been designed to the DRMB design requirements for smart motorways, GD301.

As you can see it seems that various parties are being told very different things.

In her letter to us us dated 1st Feb 2022, Baroness Vere of Norbiton, Minister for Roads, Buses and Places says she has been advised by NH that the LTC is “being designed as an All Purpose Trunk Road in line with the principles set out in the Design Manual for Roads and Bridges (DMRB), specifically the ‘Requirements for new and upgraded all-purpose trunk roads (expressways), GD300“.

As GD300 appears to cover 4 different levels of expressway we approached Thurrock Council to ask if they could throw any light on which of the 4 levels LTC would fall into.  Their response on 14th Feb to us said that their understanding is that LTC is not intended to be an Expressway and therefore does not need to comply with GD300.  Also, as far as they understand LTC is designed to CD109 (Highway Link Design) as an all-purpose trunk road and not as an Expressway.

Then of course over the years we have received numerous emails from HE/NH/LTC stating that the proposed LTC would be an All Purpose Trunk Road, but that it is being designed to smart motorway standards, would use smart technology, and that only vehicles that can use motorways would be able to use LTC (if it goes ahead).  According to them the only real difference to road users would be whether the signs are blue or green!

We do not believe that the colour of the signs would make the proposed LTC any safer than the smart motorways that have been paused.  We therefore compiled the following evidence report, which has been sent to all the same recipients are we have contacted before.  We have also asked the Office of Rail and Road who monitor National Highways, and the Transport Select Committee to investigate this, due to the fact National Highways appear to be telling different people different information.

TCAG Call for Smart LTC to be paused

Click play below to listen again to TCAG talking to Pat Marsh on BBC Radio Kent about our call to pause the LTC in line with the pause on Smart Motorways.  Or if you prefer to listen again directly on the BBC website click here and skip thorough to 2:12:31, which will be available for 29 days after broadcast.

Click Play (triangle symbol) below to listen without needing to skip through!

It then took a reminder, and until 24th March until we received a further email from National Highways on the topic of ‘Smart’ LTC. Despite our email being to NH Chief Exec, Nick Harris, he asked the LTC Development Director to respond to us.

He stated that our email of 24th Jan was forwarded to the DfT to respond, and that Baroness Vere’s email (1st Feb) was our reply for that.  However, in the acknowledgement email from NH on the 25th Jan, they stated they would reply to us within 10 working days, and provided the reference number for the correspondence.  The letter from Baroness Vere said she was replying to an email we’d sent Stephen Metcalfe MP, and did not mention it being a response on behalf of NH, or detail the NH correspondence reference.  As far as we are concerned that was not a reply on NH’s behalf, and it took from 25th of Jan to 24th March to actually get back to us, and this latest letter they say was in response to our follow up email of 28th Feb!

We pointed out the them in our response that LTC would not be “All-Purpose” as it would have motorway restrictions, so hardly all purpose!

Then came a stand out statement for us:

In the past, the Lower Thames Crossing has been referred to as an A-road using Smart Motorway technology. This is because GD 300 references GD 301 for certain design elements such as traffic and stopped vehicle detection systems and emergency areas, which National Highways has included in the design of the Lower Thames Crossing as they support the project’s safety objectives and make the road safer.

We’re sure like us, everyone will feel so much safer now knowing it is because it is a new road, and not an adapted existing road that evidently makes all the difference!!  Seriously?  Do they really expect us to believe something so ridiculous?

The proposed LTC would have no hard shoulder, is being designed using ‘Smart’ Motorway technology including the same stopped vehicle detection systems and emergency areas etc standards as ‘Smart’ Motorways, and would only be able to be used by vehicles that can legally use a motorway. How does this make it any different or safer than the ‘Smart’ motorways which have been paused whilst 5 years of safety data is collected and analysed?

It is the lack of hard shoulder, use of ‘smart’ technology on roads used by motorway traffic that is being called into question on safety grounds, and has resulted in the pause of ‘Smart’ Motorways.

We have again raised this point to him, Nick Harris, and various other government representatives and bodies, and asked for an official investigation and review of the safety concerns of the proposed LTC, and for it to be paused in line with the pause on ‘Smart’ Motorways.

We’ll update as we receive any further correspondence.