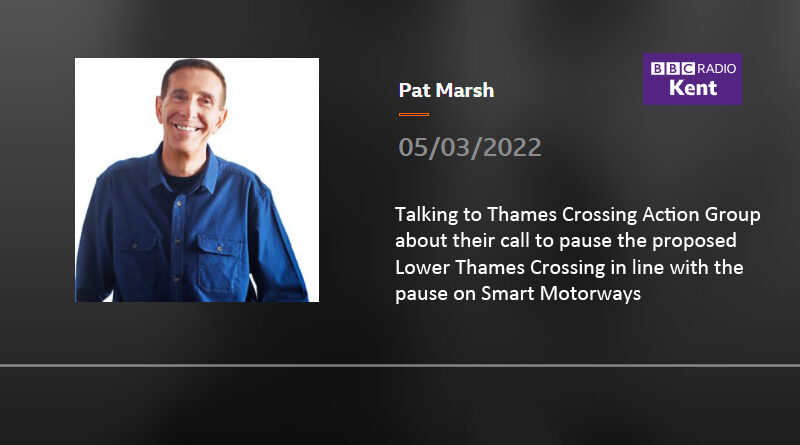 TCAG Chair, Laura spoke to Pat Marsh on BBC Radio Kent on Sat 5th March 2022, about why we are calling for the proposed Lower Thames Crossing to be paused in line with the pause of ‘smart’ motorways.

In January Government announced they had paused the roll out of ‘smart’ motorways, whilst 5 years of safety data is collected and analysed.  This follows serious concerns over the dangers of ‘smart’ motorways including sadly an ever growing amount of fatalities.

Whilst the proposed LTC has been designated an All-Purpose Trunk Road, we have written evidence that the proposed road is being designed to ‘smart’ motorway standards, would use smart technology, have no hard shoulder, and would only be able to be used by vehicles that can legally use a motorway.

We believe that the proposed LTC, if it goes ahead, would be a ‘smart’ motorway by stealth.

We have emailed various Government representatives and departments about this matter.  We also emailed National Highways CEO, Nick Harris.  We received an initial acknowledgement from his office on 25th Jan 2022 stating that we would receive a further response within 10 working days.  To date we have not received any further response.  We have now submitted further evidence to all the same representatives and departments, and asked the Transport Select Committee and Office of Rail & Road who oversee and monitor these things to kindly investigate.

You can find out more and view our evidence report on our website here.

In the meantime click just below and listen to Laura chat with BBC Radio Kent presenter Pat Marsh.  Note that National Highways were also invited on to the programme and declined to comment.

Listen again directly on the BBC website click here and skip thorough to 2:12:31, which will be available for 29 days after broadcast.