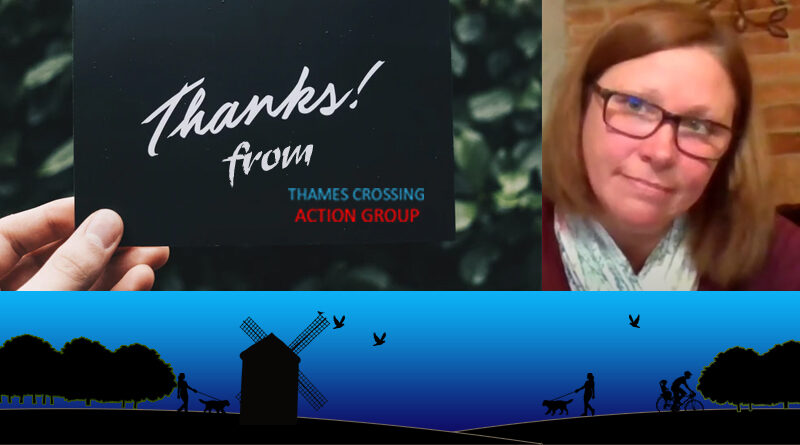 It has been announced today (10th Feb 2021), that Thurrock Council’s LTC Assistant Director, Anna Eastgate is leaving the council.

We at Thames Crossing Action Group would like to publicly acknowledge and thank Anna for all her hard work and support over her years working at Thurrock Council with our fight against the proposed Lower Thames Crossing.

Since Anna joined the council as LTC Assistant Director we have been very lucky to have learnt so much from her that has helped greatly in our fight against LTC.  She has brought so much knowledge and experience that has proven invaluable, not only to the council’s fight against LTC, but also to us as a group.

Thurrock Council’s position on LTC has improved considerably since Anna joined in 2018, and it is hard to imagine where we would be had she not joined the council in this role.  There have been times when she may tell us things we have not necessarily wanted to hear, but that we needed to hear to further our knowledge and understanding of the project and process, so that we can be in the best position possible to fight it.  With huge projects like LTC it is a whole different ball game to local planning, and there are policies and procedures in place that you need to learn about as quickly as possible to improve your chances of fighting these things.  Anna has always been honest and shared her knowledge and understanding of the project and procedure to everyone, whether it be at council meetings, LTC task force meetings,local community forum meetings, or with us as an action group.

Anna has spent considerable time with us in meetings, over the phone, in emails over the years. From our first meetings with her, she was keen to learn as much as possible about the local area and people so she could be in the best position possible to fight LTC, not only for the council, but to help us as a group too, because as a group we represented the local area and people.

We know how difficult it is trying to wade through the thousands of pages of documentation for LTC can be when you are already familar with the area, but Anna has cared enough to learn about the area and people here to allow her the best chance to use her knowledge and experience in her work as an officer.

She has highlighted to us all how sadly low the bar is in favour of the developer (ie Highways England) with these kind of huge projects.  That means that sometimes whilst we may think one thing, the law, policy, and process will not be strong enough to back up things we and others may consider to be valid arguments.  This is another reason that we support and understand the importance of legal challenges such as those by Transport Action Network, one of which is actually challenging the fact that the policy needs to be reviewed and updated. Also the importance of pushing Government to enshrine World Health Organization standards for PM2.5 into UK law.  The information Anna has shared with us in various meetings has helped us better understand issues like this, and therefore given us a better insight into other options that need to be considered and supported in the fight against LTC.

We at TCAG are extremely grateful to Anna for all her hard work, assistance, and support. We have learnt so much from her that has helped so greatly in our fight against LTC, and appreciate all the work and effort she (and the team) have put into the council’s objections to LTC also.  We are sad that Anna is leaving, but we wish her well in her future, and she will always be a part of the TCAG story because of how much knowledge and info we have gained from her during her time at Thurrock Council.