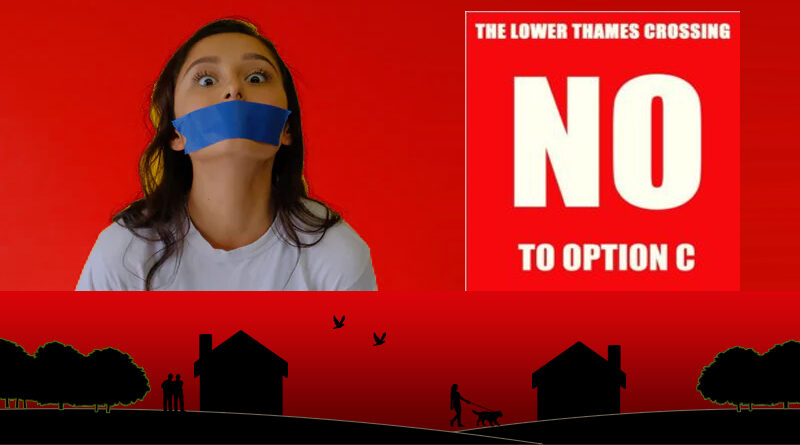 Has anyone else been experiencing issues with censorship on the official Lower Thames Crossing Facebook page?

Have you received DMs to advise that your comments have been deleted?

We are aware that some, including TCAG Chair, Laura Blake, and a researcher from Transport Action Network have received warnings from HE/LTC that their comments on the official LTC Facebook page have been deleted due to the page guidelines.

Firstly, where are the public meant to view these guidelines when visiting the LTC page on Facebook?  HE/LTC have been sending a link and/or screen capture to the Guidelines, but where can they be found on the actual page?

What are the Guidelines?

The LTC Social Media Guidelines that have been shared with TCAG are as follows:

So what has happened?

In the instance of the Transport Action Network researcher, they simply posted a link to the ‘About’ page of the Jacobs Engineering Group website as part of her comment in response to LTC’s own post regarding the fact they had awarded Jacobs with the Integration Partner contract for the proposed LTC.  The comment, with link, was made to show that Jacobs are a massive multinational based in Dallas, Texas. So not local, nor even British.  Since HE/LTC have been publicising the fact they are looking to provide contracts and work to locals this is a very relevant point that was highlighted by more than one person commenting in response to LTC’s post.

HE/LTC stated in a Direct Message that the comment had been deleted and could be reposted without the link, which has been done.  But why are they so keen to remove evidence that backs up the claims of people that shows HE are not backing their words with actions?  Why are contracts being awarded to a massive multinational, whilst they brag about contracts and jobs for local businesses?  Is Texas, USA now considered local to the South East of England?!

We also question that the Guidelines do not make it perfectly clear that absolutely no links are allowed in any comments, it suggests that various types of links will not be acceptable, but not that absolutely all links are not allowed.

TCAG Chair Laura has been warned via email and Direct Message of the following:

An example of the first point is that HE/LTC posted about the 22,000 jobs on LTC. Laura commented that she felt the post was misleading as the jobs do not technically exist, until such time as a DCO is granted and that they hadn’t even been able to submit an acceptable DCO application yet, let alone been granted one.

Is it right and fair for HE/LTC to be able to post on the same topic more than once, yet only allow us the chance to comment on one of those posts?  Plus reading through post threads it is apparent that they are not censoring those who are commenting to show support of LTC on more than one occassion.

With regard to links see the above questioning that the Guidelines don’t actually make it clear that absolutely no links are allowed.

It appears that whilst HE/LTC state that they welcome people to engage in conversation, that does not include anyone who opposes the LTC being allowed to ask supporters of LTC questions or attempt to have any kind of conversation.  And yet again if supporters start questioning or commenting on those of us sharing opposition comments, that appears to be acceptable to HE/LTC.

As for defamatory comments against HE and their staff, Laura has asked for evidence of this and is still waiting on a response from HE/LTC.

Of course we can understand a need to have guidelines/rules. We have our own group rules on our TCAG Facebook page, and we make it perfectly clear to all when they request to join our group on Facebook that we are a group who are strongly opposed to the proposed LTC, and that if they support LTC it may not be the right group for them! However, we do still allow supporters of LTC to join our group on Facebook as long as they agree to abide by the group rules.

HE/LTC are clearly biased in favour of LTC, yet also meant to be neutral and open to hearing all feedback from the public, not just those who support LTC.

However, from what we, and others, are experiencing and witnessing there clearly appears to be some discrimination and censorship from HE/LTC against those of us who are opposed to the proposed LTC.

TCAG have emailed HE/LTC questioning this latest apparent attempt to censor opposition to the proposed LTC, but as yet we have not had a response.