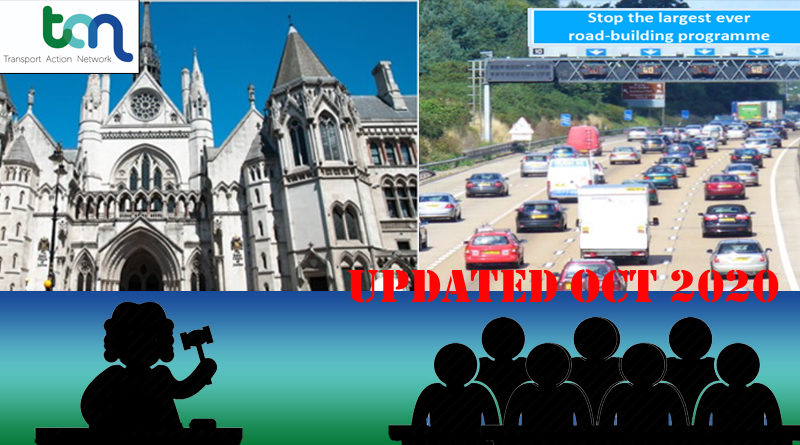 ARCHIVE ALERT
The latest update on this topic can now be found at
https://www.thamescrossingactiongroup.com/transport-action-networks-legal-challenges/

As we have shared previously (www.thamescrossingactiongroup.com/transport-action-network-take-legal-action/) Transport Action Network are launching a legal challenge against the UK Government’s Department for Transport’s (DfT) £27bn roads programme, which includes the proposed Lower Thames Crossing.

Today they have shared with us the following fantastic news:

“We’ve won the first round in our David and Goliath battle against the Department for Transport’s (DfT) £27bn roads programme. We were given permission to proceed with our legal challenge to the “largest ever roads programme” at the High Court this week. An order by Mrs Justice Lieven declared the case to be significant, meaning it will be fast-tracked for a full hearing by November.

The £27bn Road Investment Strategy 2 was announced alongside the Budget in March but had been years in the making. We’re challenging it on the basis that ministers published it without considering the net zero target, which became law in June 2019. The government’s response was that it was entitled to put off thinking about the implications until after it published a Transport Decarbonisation Plan later in 2020, which it is currently consulting on. This was despite the fact that ministers agreed any such plan will inevitably need to set out how to use cars less.

The legal challenge will now come at a crucial time, when the Chancellor is due to set out new spending priorities and transport ministers have to make decisions on flagship road schemes, such as the A303 Stonehenge and A303 Sparkford – Ilchester. These were due to be decided on 17 July but Grant Shapps MP has deferred a decision on both schemes until November, calling for more information.

With polling showing increased support for improving air quality but opposition to road building, it seems the wheels are already falling off the roads plan.” – Transport Action Network (July 2020)

Thames Crossing Action Group are proud to be a part of the Transport Action Network, and thank Chris Todd, Rebecca Lush and the legal team for all their hard work on this and the support and help they give us and other action groups around the country.  It really is another example of ‘Together we are Stronger’!

If you can please consider donating toward the legal costs of this legal challenge – https://www.crowdjustice.com/case/stop-largest-ever-roads-programme/, and also please support the cause by sharing this news and keep following the case.

On 29 October Transport Action Network unfortunately failed to add air pollution and strategic environmental assessment to their legal challenge of the ‘largest ever’ roads programme.  To be clear these were extra aspects they wanted to try and get added to the main challenge.

However, while they still have the option of appealing that decision, the main challenge on climate change is still to be heard, probably in the new year.