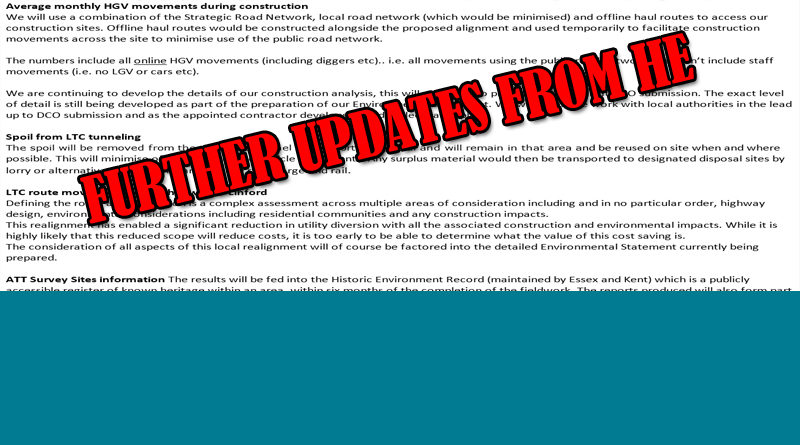 We’ve been waiting on answers to some of our questions to Highways England about the proposed Lower Thames Crossing for some time now, and have finally just got a batch of further LTC updates/answers, so here’s the latest info!

We note that on page 106 in the Supplementary Consultation Guide they list average number of HGV journeys per month.  However as we are very aware from the Ground Investigations and Archaeological Trial Trenching Survey works that are currently being carried out at various locations, it is not just HGVs on the road in relation to these works.  We asked HE:

We’re a little confused as to whether the HGV making the offline movements have been included in the figures or not, as they have to get to the offline routes somehow using the Strategic Road Network and local roads. We have emailed HE back for further clarification and will share any response as we receive it.

You can find out other update about construction hours/routes at www.thamescrossingactiongroup.com/proposed-construction-hours-routes/

We have followed up to ask why there is an increase in HGV movements in this particular area. Also asking where the designated disposal sites are or are being considered to be. Also we have asked since much of the spoil is expected to be chalk, how the spoil will be used and what will be done to ensure the area doesn’t end up looking like a snow blizzard has barrelled through the area, and the health impacts chalk dust potentially blowing about could have.

NB. We asked this question because we are trying to ascertain what price HE put on the wellbeing of residents over cost of moving pylons

Clearly no answer to the actual question, and again we have to wait for the Environmental Statement which is released at Development Consent Order submission stage.

Many of you like us have been curious as to how HE can state that LTC gives an extra 90% capacity.  We asked them for more details of this, as clearly it is not the amount of lanes as that would only be 75%.

If like us you feel this is misleading, and not clear and informative please do say so in your consulation response forms.  As we keep saying HE have a legal obligation to consult us adeqately with clear and informative materials. They have to read, log and analyze everything we put in our responses.  They will not want the Planning Inspectorate hearing comments and evidence of an inadequate consultation. We need to comment and report anything we consider to be an inadequacy with as much evidence and reasoning as possible please.  Hopefully we can force HE to re-run the consultation and get the adequate consultation we deserve and are entitled to!

We’ve had quite a few people ask or tell us about LTC vehicles being seen in or near a compound just by the Sainsbury’s roundabout near Lakeside. Where the original coach park of Lakeside was for those who remember!

HE have now confirmed to us that their contractors working on the archaeological trail trenching and surveys are using the compound near Lakeside.

We like others are questioning what will happen with regard to the bus service along Ockendon Rd if LTC goes ahead during the construction period.

HE’s reponse to this is:

Don’t know about anyone else but doesn’t give us much reassurance.  What diversions and alternative routes could be used in instances like this?

We also received further info in response to our many questions on the ‘smart’ aspect of LTC, distances, positioning, and frequency of Emergency Refuge Area/Emergency Areas, emergency vehicle access, safety for road users. We felt that update warranted a post of it’s own as it contained lots of info, which you can find here – www.thamescrossingactiongroup.com/smart-ltc-aspects-of-safety/.