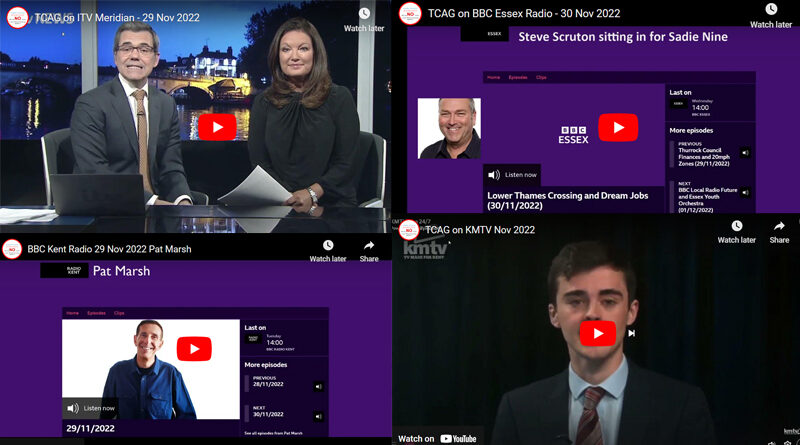 There’s been a fair bit of media coverage lately with the LTC Development Consent Order (DCO) application being accepted for examination.  TCAG were invited to take part in a few interviews, here we highlight some of the media coverage in Nov/Dec 2022, so you can catch up if you missed the interviews live.

We know this definitely went out on ITV Meridian, and understand it has also aired on ITV London.  This piece also included Thurrock MP Jackie Doyle-Price voicing concerns following on from her calls for the LTC to be scrapped.

Yes they have unfortunately used a very out of date map of the proposed route.  And yes it was very presumptuous of LTC Exec Director, Matt Palmer to suggest that the Transport Secretary will grant permission and they will start construction, as there are no guarantees of this.  But this kind of misleading representation is what we have come to expect from National Highways.

Listen to TCAG speak with Steve Scruton, who was sitting in for Sadie Nine, about the proposed LTC on BBC Essex Radio on 30th November 2022.

These are just some of the media coverage in Nov/Dec 2022, there was plenty of coverage from other sources too.