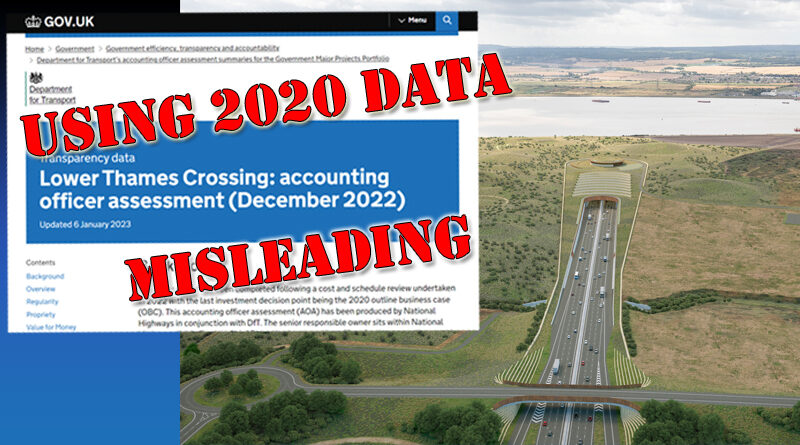 Accounting Officer Assessments (AOA) are supposed to offer guidance and transparency to Ministers for good decision-making over significant spending decisions.

The failure of Government departments to produce adequate AOAs was highlighted recently by the Public Accounts Committee.

TCAG had written to the Public Accounts Committee and Treasury Officer of Accounts highlighting that the AOA for the LTC had still not been published, despite the DfT stating it would be published in Autumn 2022.

However, rather than using the latest information and figures from the Nov 2022 LTC Development Consent Order (DCO) application documents the AOA that was published today relied on figures that are two years out of date, taken from the 2020 Outline Business Case (OBC).

There have been significant changes with the proposed LTC project since 2020, including the cost rising up to £9-10bn+.

The 2020 OBC details the adjusted Benefit Cost Ratio for the LTC as 1.46. Whereas the latest NH assessment to form part of the LTC DCO application shows the adjusted BCR has shrunk to 1.22.

It also states that the project aspires to achieve Net Zero carbon position, which is hardly a true and transparent representation of the 6.6 million tonnes of carbon that the proposed LTC is estimated to emit, if it goes ahead. A top NH/LTC boss at an industry event has even said the project won’t go ahead unless the carbon issues can be resolved.

There are so many questionable aspects to this latest assessment report. We often question why Government continue to push ahead with the proposed LTC when it is not fit for purpose and such poor value for money, perhaps this assessment explains how ministers have potentially been misled, and why an urgent review of the proposed LTC is so desperately needed.

“When it comes to decisions about spending huge amounts of taxpayers’ money Ministers should have adequate, accurate, and up to date info.  Clearly this is not the case with the proposed £10bn+ Lower Thames Crossing.  It is disgraceful that misleading info is being signed off and presented to Ministers for a project that is neither fit for purpose nor value for money.”

We have written to the Public Accounts Committee and the National Audit Office (who are conducting an inquiry into the rising costs of road schemes), and others, to highlight that misleading figures have been used, and the benefits of the scheme have been exaggerated with ministers potentially misled.

What others are saying

Stephen Metcalfe MP (South Basildon and East Thurrock) has commented on our letter to the Public Accounts Committee and Treasury Officer of Accounts.  He has told us that he feels we have made some valid points.  He has written to the Chancellor asking him to address the valid point raised.  He also asked a question regarding LTC today (19th Jan 2023) in the House of Commons.  Stephen has told us that he spoke to the Minister afterwards and is seeking another meeting with him and the Secretary of State for Transport.  We thank Stephen for his taking this action, and wait to receive further updates from him.

A copy of the Outline Business Case is a document that TCAG and others, including Local Authorities have been keen to view for years now.  It was finally released in Oct 2022 following a Freedom of Information request from Thurrock Council.

Initially National Highways refused to share the document with the Local Authority as they had previously done with others.  The council went to the Information Commissioner’s Office (ICO) who instructed NH to release the information straight away.

NH released a copy late in Oct 2022 but it was an outdated 2020 Outline Business Case.