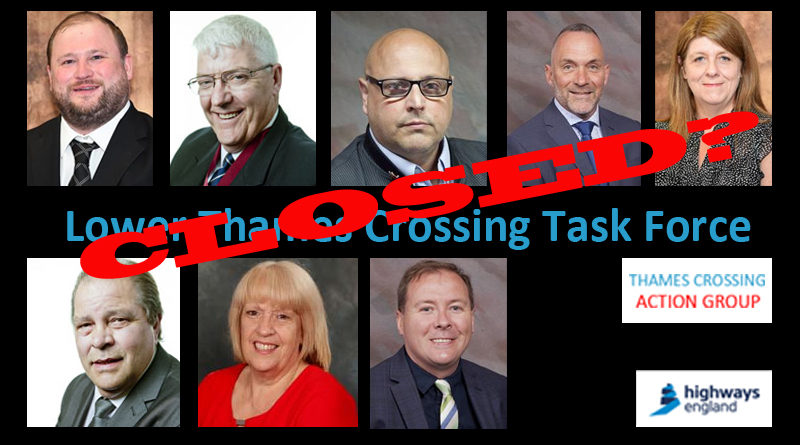 We were informed the email was to make us aware that the General Services Committee will be considering a report to finish the Task Force on 3rd August in light of and in anticipation of the submission of the council’s final response to the LTC consultation.  The report is from Cllr Mark Coxshall, Portfolio Holder for Regeneration.  A link to view the report was shared with us, which is available on the Thurrock Council website – https://democracy.thurrock.gov.uk/ieListDocuments.aspx?CId=130&MId=5890&Ver=4.

There was no discussion with TCAG, or any other Task Force Committee members that we are aware of, with regard to closing the Task Force down.  To share this decision publicly without any prior discussion with the actual Task Force, including the Chair is totally unacceptable in our opinion.

Point 1.2 in the report  states “That the General Services Committee notes and thanks the members of the LTC Task Force past and present for their contribution to shaping the proposals.”  We find this very hard to believe or accept since they didn’t even have the decency to discuss the proposal to close LTC Task Force down with any of the Task Force committee first.

Looking at the list of committee members who make up the General Services Committee we also seriously question how such a statement can be made when many of that committee also were totally unaware of the decison too. Especially when you consider that list includes LTC Task Force Chair Cllr Fraser Massey, who knew nothing of this decison before yesterday, and Cllr John Kent who tweeted TCAG to ask if this had been discussed with us, and has since confirmed that he was not aware of this recommendation prior to the Agenda being published.

We, and I know Cllr Massey and others on the Task Force, do not consider that our work is done.  Trying to use the excuse that there is unlikely to be further consultation on LTC before HE submit the Development Consent Order (DCO) later this year is not adequate, and nobody knows for a fact that this will be the case. Whilst it may be unlikely in the Council’s opinon, if the proceedure is being followed correctly, HE have to take into account all responses to this consultation and whether they need to hold further rounds of consultation is dependent on whether they need to make any additional changes as a direct response to the results from this consultation before submitting their DCO application. Since this consultation runs until 12th of August nobody can be sure whether there will be a need for further consultation yet or not.

TCAG would also like to remind the council that the creation of the LTC Task Force was a result of discussions between TCAG and the council, after the incident whereby George Abbott (then TCAG Chair) and other members including current Chair (Laura Blake) were ejected from the Council Chambers after George respectly requested the opportunity to speak for a few minutes about LTC and was refused by the Mayor (Tunde Ojetola).

There was a lot of media coverage of the incident, and not long after George, met with Thurrock Council Leader, Rob Gledhill and the council’s Chief Executive, Lyn Carpenter, to discuss how the group and the council can have a more accessible conversation over the controversial Lower Thames Crossing. An agreement was made that amongst other things there would be monthly meetings to discuss the LTC, and the LTC Task Force meeting was born, with a seat on the committee for a TCAG representative.

On Monday evening alone it was discussed about the Task Force working to ensure members of the public are aware of their rights to register as Interested Parties during the DCO stage of the process, to ensure that everyone who wishes still has a chance to be involved.

Transport Action Network are looking at taking legal challenge against RIS2 which includes LTC. Government are about to start debating the Environmental Bill which includes consideration of including WHO standards for PM2.5 levels into UK law, which we know would result in the whole TLC route failing if it has to comply with that standard. Letters from the Task Force to the Transport Select Committee, Taxpayer Alliance and others could also be helpful. As well as the Task Force generally being the link between the council and the people of Thurrock with regard to all things LTC.  HE’s consultations are part of a process, but there are other means that we can use to challenge LTC and as a Task Force surely we should be doing all we can to continue our fight against LTC, unless Thurrock Council’s stance against LTC has changed?

We have also today become aware of the fact that the ‘London Resort’ are now proposing a car parking facility in the Tilbury area (with a boat service across the river to the theme park), this issue also ties in with LTC because of the fact LTC will not have direct access to the A1089 southbound, meaning that traffic will have to use the Stanford Detour (https://www.thamescrossingactiongroup.com/the-stanford-detour/). Alternatively this car park traffic will use the M25 to the A13 which will add to the traffic at the Dartford Crossing area, which is the problem that LTC was original tasked to solve. As we all know the Dartford Crossing will still be over capacity even if LTC goes ahead, but now with ‘London Resort’ which is not factored into the LTC plans (because it hasn’t yet got a DCO), this in our opinion all expands the impacts of the LTC.

We will be contacting the Council to discuss all of this further.  We would welcome any residents wishing to express their views on this matter to email their local ward councillor (details of councillors by ward can be found here) and Cllr Mark Coxshall (Portfolio Holder for Regeneration) and Cllr Rob Gledhill (Council Leader)

To us the LTC Task Force represents Thurrock Council wishing to have a line for open and ongoing communication regarding the LTC between members of the public, represented by TCAG and a Resident Rep (currently Robert Quick), two business reps, and the Council to ensure that everyone is aware of what is going on and working together as best we can in our fight against LTC.  We do not take the announcement of this proposal to shut LTC Task Force down on Aug 3rd as being in keeping with that agreement, or their stance of being completely opposed to the proposed Lower Thames Crossing.

Additonal info about the GSC meeting

The meeting will be held at 6.00 pm on 3 August 2020.  Due to current government guidance on social-distancing and the COVID-19 virus, this meeting will not be open for members of the public to attend. Arrangements have been made for the press and public to watch the meeting live via the Council’s online webcast channel: https://youtu.be/VQZYTjmmLPU.

What you can do

Please email the General Services Committee members, including Cllr Coxshall who’s report proposes to close LTC Task Force. Please bear in mind that Cllr Massey, whilst Chair of the LTC Task Force was not made aware of this proposal until Friday afternoon the same as us. Just because members sit on this committee does not automatically mean they knew about or support this proposal.

Please also email your own local ward councillor, if you haven’t already emailed them as a member of the General Services Committee, and let them know what you think about this proposal and ask them to do what they can to help.  Details of your councillors along with their contact details can be found on the council website – click here

Our update on the incident at the July 2017 full council meeting where members of TCAG were ejected – https://www.thamescrossingactiongroup.com/tcag-ejected/

Thurrock Gazette report on the discussions between TCAG and council that resulted in the creation of LTC Task Force – https://www.thurrockgazette.co.uk/news/15458145.lower-thames-crossing-discussion-expected-to-improve-campaigner-says/