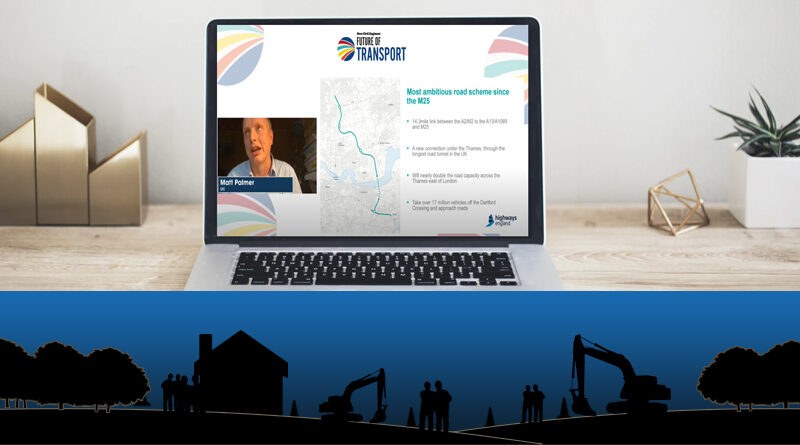 We have learnt that Matt Palmer has only recently joined LTC as Executive Director in July this year.  He apparently comes from Heathrow where  he was Development Director with responsibility for leading the creation the £14bn scheme to deliver a 3rd runway at Heathrow!  You may remember our previous mentions of the Court of Appeal ruling that blocked the Heathrow expansion on environmental grounds.

We note that in his presentation he states that LTC is the biggest road project since the M25 was completed, which always makes us laugh.  Seriously, has the M25 ever been completed considering it is supposed to be a motorway orbital and the A282 (Dartford Crossing) section is clearly not a motorway.  Of course our preferred alternative route of Option A14 could finally complete the M25 as a motorway orbital, and take more traffic away from the current crossing!

He also states that they want to connect the channel ports to the UKs centres of manufacturing in the Midlands and the North, which is something they only seem to openly mention at industry/business events, rather than at events aimed at the public.  Of course we know this, but this is an example of how HE have presented a completely different sales pitch on LTC to industry/business throughout this whole process.

In the video presentation it is stated over 13m vehicles per year would be taken away from the Dartford Crossing (around 3:30 in the video), yet he said about 15m at around 4:50, and the slide show states nearly 17m (visible around 4:50 also). Further examples that not only do HE have no idea what they are talking about, they can’t even be bothered to ensure continuity in a short presentation like this. Do they even realise they are making these mistakes, or do they simply just not care because they think they can get away with anything?

He then spouts nonsense about “removing the congestion at Dartford” (around 5:08) when we all know that the current crossing will remain over capacity even if LTC goes ahead, yet still they keep reeling out this garbage, despite their own figures proving it is untrue.

He states that they have increased LTC to 3 lanes, when again we all know that it is not 3 lanes along the entire route in both directions.  From the M25 to A13 south is only 2 lanes, and other connections on and off LTC are bottlenecks too.

He says that LTC would be the “3rd largest tunnel in UK” (around 8:30) yet the official website states it would actually be the 3rd largest in world. Yet another example of not being able to get the facts right!

Stating that they lowered the road up to 5-6m to improve visuals all due to consultation. Doesn’t that just prove how out of touch and wrong the original designs were, it’s not rocket science!

He says they have just completed 3 years of ground investigations when we can clearly still see investigative works being carried out in various locations.

The Environmental claims trying to make them look like they care are ludicrous and let’s not forget they have refused to share adequate info on the Environmental impacts with the public, instead forcing us to wait until they finally release the DCO documents, which won’t be until the DCO application is accepted.  This is despite all local authorities writing to HE prior to the DCO application being submitted requesting the documents be released asap after the application was submitted to allow as much time as poss since it is expected to be 50-60 thousand pages of documentation that is due to be released.  He did state that LTC would now impact 11 hectares of ancient woodland instead of the previous 23 hectares, but whilst this is the first time we have had an actual figure of impact from them, we still say that any impact is too much.

There was a joint Q&A section that Mr Palmer took part in, alongside other event speakers.

In Q&A section he states LTC is a 3 lane motorway. As already highlighted it is not 3 lanes the entire length, plus we have also been told time and time again that it will not be a motorway.

He also talks about “doing it once well”.

Why then has the Tilbury Link Rd been removed only to resurface as a RIS3 pipeline project?  Why is the Rest and Service Area that ‘had’ to be included in 2018 since been removed but is still being discussed as a stand alone project?  Why are the Blue Bell Hill Improvements being dealt with as a separate stand alone project, when they are needed as a direct result of LTC?  Why are HE auctioning off all the things from the A14 Cambridge project only to have to purchase them again for LTC and other projects?  Also if they are so keen to do it once and well why have there been so many inadequacies throughout the whole consultation process so far?!

We’re not impressed at all, and presentations like this just add to our serious concerns about just how bad LTC is and how low the level of knowledge and understanding is.

This has now been reported in other press, and it frustrates and angers us that HE are making such announcments and moves when they haven’t yet been granted permission for LTC.

We also question their timing in making this announcement just as the decision is due as to whether the Planning Inspectorate will accept the DCO application for Examination, which is expected by the 20th Nov.  It gives some the impression that permission has already been granted and could put people off registering as Interested Parties and continuing to have their say in the DCO stage, which we are entitled to do.

Also the way many press/media are describing it is the £2bn LTC tunnel contract, detracts from the true predicted cost of £8.2bn.  The latest rise in predicted cost which was quietly mentioned earlier in the year during the RIS2 announcements as part of the Spring Budget, a fact which HE/LTC seem to be trying to keep as quiet as possible.

It just proves that if the tunnelling and approach roads are a £2bn contract, just how large the project is when the remainder is predicted to cost £6.2bn.  The sheer scale of the project, as in just how much distance and land it covers is something else HE always seem to try to avoid fully disclosing by describing it as a crossing between Gravesend and Tilbury, without mentioning exactly how destructive it is from the M2 through to J28 on the M25.