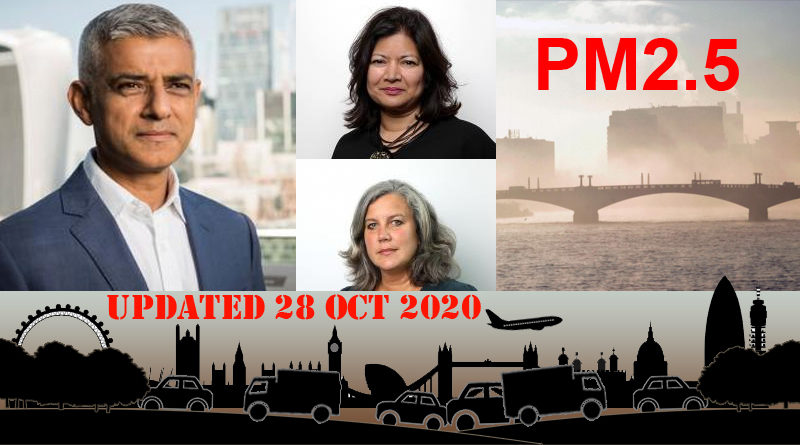 It is worth pointing out that whilst the whole proposed LTC route fails, we have highlighted aspects in relation to negative impacts to London, and in particular the London Borough of Havering, in our letter since that is the limitation of what would fall into the Mayor and his teams jurisdiction.

TCAG letter to the Mayor of London

Since commiting London to WHO guidelines for PM2.5 the Mayor has also commissioned the Environmental Research Group (ERG) at King’s College London to model PM2.5 concentrations in London in 2030. The report outlines the assumptions and results of this modelling.

The report shows that without the additional powers and measures outlined in the report, London will not meet its target of compliance with World Health Organisation limits for PM2.5 by 2030.

You can read the full report here.

We have additionally sent a copy of our letter to the Mayor and team to ERG to seek their comments also.

Response on behalf of the Mayor of London

We have today (28 Oct 2020) received the following reply from Heidi Alexander, Deputy Mayor for Transport on behalf of the Mayor of London, Sadiq Khan, and Deputy Mayor for Environment and Energy, Shirley Rodrigues.

Response on behalf of the Mayor of London


It is good to read that Transport for London (TfL) have also asked HE to set out why it deems assessment of PM2.5 unnecessary, based on the impacts of the LTC scheme, and is awaiting a response on this matter.  We like TfL will be interested to hear HE’s response.

The Assembly holds the Mayor and Mayoral advisers to account by publicly examining policies and programmes through committee meetings, plenary sessions, site visits and investigations.

The Mayor should respond to Assembly motions and formal recommendations.

In addition, the Assembly questions the Mayor ten times a year at Mayor’s Question Time.

We have also submitted a question to the London Assembly for their consideration for Mayors Question Time.  We have asked the following:

“Will the Mayor campaign against, and publicly voice his opposition to the proposed Lower Thames Crossing, which is partly within the London Borough of Havering, since evidence shows that the whole LTC route would fail against World Health Organisation (WHO) guidelines for PM2.5, which he has committed London to comply with by 2030?“

We now have to wait and see if the Assembly will kindly agree to include the question in Mayor Question Time.

We will update this post with any responses we receive in due course!

If you wish to send your own comments and questions relating to LTC to the Mayor and his team it can be done via the official website here.

To suggest a question for the Mayor via the London Assembly click here.

We all have serious concerns over air quality in regard to the proposed LTC, and British Lung Foundation have set up a quick and easy form to fill in, where you can add your own words too if you wish to get your message across to your local MP.

As we know the whole proposed LTC route would fail against World Health Organisation standards for PM2.5, which is why we feel it important to push for WHO standards for PM2.5 to be enshrined in UK as a matter of urgency. We need and deserve clean air.

Please click here and send a message to your local MP now! It literally takes a couple of minutes. Of course if you prefer to email your local MP directly instead of using this template then that’s great too!