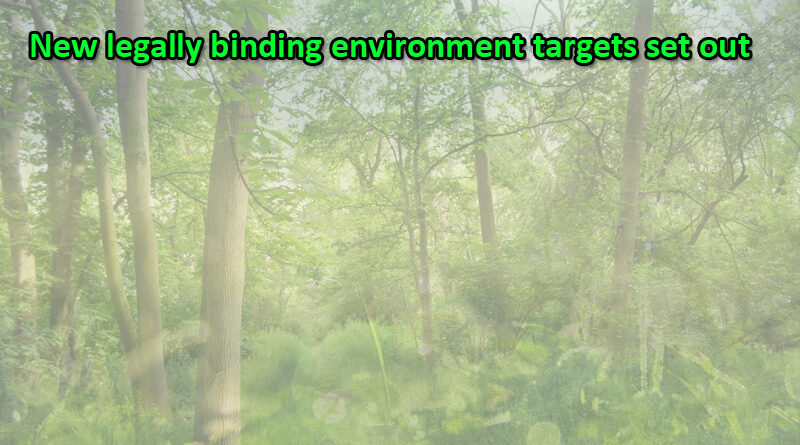 The long awaited Environment Act targets have finally been set out by Government.

When the Act was passed it included a legal commitment to set the targets by the 31st of Oct 2022.  But on 28th Oct 2022 it was announced that there would be a delay in setting the targets.  The Wildlife Trusts and other nature charities wrote to Government about the missed targets to begin the complaints process to the Office of Environmental Protection who can investigate such matters.

On the 16th December 2022 Government finally announced the new targets had been set out. Further details can be found in a written statement by Lord Benyon.

What are the targets?

The thirteen targets that will be enshrined in to UK law are as follows:

Biodiversity in the sea

Many have called the new targets weak and unambitious.

With a project as hugely destructive and harmful as the proposed LTC it is quite apparent that many of these targets will be relevant.  In particular we have previously commented on the air quality targets, as we know that the whole proposed LTC would fail against a PM2.5 target of 10 µg m-3.  Biodiversity and woodland targets are also of course very relevant.

How will the targets be reached?

What will be really interesting is how Government propose to meet these new legally binding targets.  Clearly projects like the proposed LTC would fail against them.

Government will set out more details about their plans to deliver them in their ‘Environmental Improvement Plan: our manifesto for the environment for the next 5 years’, which legally should be published by 31 January 2023.  Watch this space!

Ella’s Law has been passed in the House of Lords and now passes to the Commons to be scrutinized by MPs.  This law is named after Ella Adoo-Kissi-Debrah the 9 year old girl who was the first person in the UK to have air pollution listed as their cause of death.

The Bill was approved, on the 2nd of December 2022, after a lot of work by Baroness Jenny Jones, and if approved by MPs will see the human right to clean air enshrined into UK law.  It would require public bodies to review and monitor pollution limits, with the aim of achieving clean air within five years.

Also, Client Earth are calling for people to use their quick and easy form to send an email to your MP asking them to attend a parliamentary event they are holding on 11th Jan 2023 to raise their understanding of how dangerous road transport pollution can be for human health.

Send your MP an email now