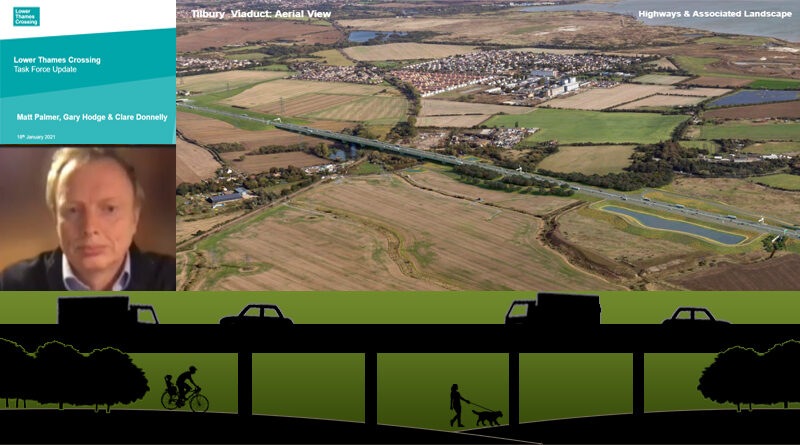 Firstly, the new LTC Exec Director Matt Palmer introduced himself followed by some questions from the Task Force committee.

There was also a presentation on discussions between Thurrock Council and HE/LTC on mitigation points from the council’s mitigation wish list that was first presented to Task Force in October.  Also LTC Design presentation from a couple of the HE/LTC team. This presentation was the first insight we have had of LTC visually/design wise at a kind of level we have been hoping for and asking for for so long now.

Please click through the pages of the presentation and take a look at the visuals.

Further detail/clarification about the mitigation list and which items from the list are referenced in this presentation has been requested.

You will see detail on the North Portal, and service building. Plus imagery of a look out which is being proposed for on top of the landform, are area they are now refering to as Tilbury Fields.

Also some new imagery of the Tilbury Loop viaduct, and some design detail and imagery for the viaducts across the Mardyke valley.

We noted that there was no detail in the presentation for the A13 junction, and have asked if anything is available, or could be created and shared with us.

We only received a copy of the presentation within half and hour of the meeting, and of course being a Thurrock Council meeting it does only cover the Thurrock section of the route.  We stated on the night that we would be submitting any further questions we have via email, after we’ve had a chance to review the presentation in more detail.

We are already compiling a list of questions, if you have any specific questions about this presentation please email us and we will try to get an answer if possible

Here’s the meeting in full, for those that wish to watch

What else has Matt Palmer been saying lately?

You may remember we ran an update about Mr Palmer previously, which is linked below, and how he came to LTC in July 2020 from working as Development Director on the third runway project at Heathrow.

As well as that conference and some online/social media content with him in, we tuned into BBC Kent Radio last week (14th Jan 2020), where he spoke on the Breakfast Show about the launch of the LTC SME directory. LTC’s database of local Small and Medium-sized Enterprises/businesses and their specialisms, that they say will be given to the main works contractors to give SMEs the best possible chance to work on the LTC project.

In that interview he was asked where the LTC project was currently, to which he outlined that they had withdrawn the DCO application in Nov last year to “put some more information on”! The fact is that they withdrew the DCO application because if they hadn’t of done so the Planning Inspectorate would have refused it.

He also stated that they would be resubmitting it shortly. Whereas at Task Force on Monday he categorically said they were considering a further round of consultation. We can’t see how you can have it both ways.  Holding a further round of consultation will take time to prepare, hold, and analyze, and hardly means they will be resubmitting ‘shortly’.

He also states that “everything is go”, and that “employment starting next year onwards”.  He seems to have forgotten that they don’t have permission yet. They haven’t even been able to submit an acceptable DCO application, let alone get it granted!

To us this interview seems somewhat misleading, and doesn’t match with what he was saying to us all at LTC Task Force just a few days later.

What have HE said to Dartford Council?

It also doesn’t match the info that it appears Dartford Council have been given. At their Joint Transport Board meeting on Tues 8th Dec 2020, Lukman Agboola gave a verbal update on the LTC to members.  HE stated that he had been in a meeting with HE about LTC, and that the estimated timing of the resubmission of the LTC DCO application is April 2021.

Yet when we have asked HE/LTC is writing if the estimated date for resubmission is likely to be April 2021, we have been told

The date of April 2021 isn’t a date we’ve briefed for DCO resubmission. We’ve withdrawn the Development Consent Order application for the Lower Thames Crossing based on feedback we’ve had from the Planning Inspectorate. We’re taking the time to collate the information required for the specific points raised and will be resubmitting the application next year. So at this stage there isn’t an update I can give you but I will of course provide you with one as soon as I have more information. – HE/LTC (15th Dec 2020)

Whilst it doesn’t appear that Dartford Council allow their YouTube videos to be embedded into other sites, you can view the meeting online here for those that wish to watch!

As we all know this January 2021 LTC Task Force meeting is not the first time we have experienced HE/LTC delivering different info/impressions depending on who they are talking to at the time.  As to which is correct, time will tell.