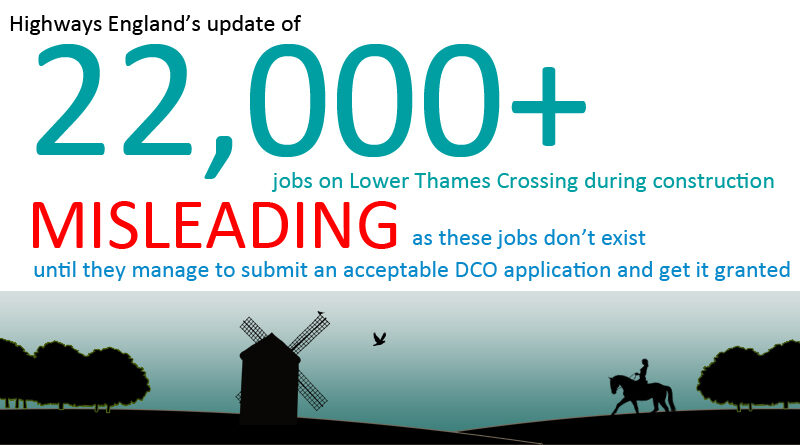 Yet another misleading update from HE/LTC today (Thurs 28th Jan 2021) this time they’re trying to convince people they have 22,000 jobs for people in Kent and Essex.

What HE/LTC seem to be forgetting is that they haven’t even been able to submit an acceptable Development Consent Order (DCO) application yet, let alone been granted a DCO. Any construction would be illegal unless a DCO is granted, so these 22,000 jobs are by no means guaranteed, yet HE are trying to give the impression that all is well and full steam ahead.

HE/LTC need to stop trying to mislead people into thinking they have permission and all is going to plan with LTC.  Until such time as they are granted a DCO (if they are) these jobs are empty promises. They also appear to be trying to give the impression that there will be jobs for local people which again there are no guarantees of.

Plus to make misleading announcements of jobs that don’t even exist yet at the same time as people are evidently being made redundant just makes it even worse in our opinion.

Other misleading info in the update

As well as talking as though they already have permission for LTC, which they don’t, there are other points in the update which are misleading to say the least.

The proposed new crossing under the Thames will almost double road capacity between Kent and Essex, ease congestion across the region, and divert over 13 million vehicles away from the Dartford Crossing each year.

This is the kind of language HE/LTC use to try and give the impression LTC would be more beneficial than it would be in reality.  The current Dartford Crossing has 4 lanes in each direction make a total of 8 lanes crossing the river.  LTC is proposed to be 3 lanes in each direction (in the tunnels) meaning 6 lanes in total crossing the river.  Most will read HE/LTC’s statement and immediately think of it as meaning amount of lanes, when in reality they come up with this figure in a far more confusing way of using traffic flow data, and taking into account the fact the traffic lights turn red every 15 minutes at the Dartford Tunnels and things like that!

They say that LTC would divert over 13 million vehicles away from the Dartford Crossing each year.  That sounds like a large number of vehicles, until you consider:

So by the time you do the math, as highlighted and referenced in our update here, the Dartford Crossing will still be over capacity.

They try to use wording and figures in the way they have in this latest update to try and mislead people into thinking it will solve the problems that we currently suffer with, but the data proves otherwise.  Not to mention Tim Jones stated it won’t solve the problems before he resigned as LTC Project Director on numerous occasions in public.

“By connecting people to jobs and businesses to customers, the Lower Thames Crossing will add billions to the local economy and play an important part in the Government’s plan to level up the UK.”

Yet various Local Authorities have publicly voiced serious concerns of the negative impact to the local economy the LTC would have if it goes ahead.  Let’s not forget that it was Mr Palmer who was recently commenting about wanting to share info, have discussions with stakeholders, and to listen to people at the January LTC Task Force meeting!

TCAG have also been asking HE/LTC to provide an update on what the overall economic benefit is predicted to be for LTC. The most recent(!) figure available online appears to be around £8bn, which was stated in 2017 at the preferred route announcement was made.  Bear in mind the current predicted cost of LTC is now up to £8.2bn!  We have asked a number of times for an updated figure and kept being told we would have to wait until they released such info in the DCO application, which has obviously since been withdrawn, and we are waiting for the resubmission.

In the meantime a Freedom of Information request for a copy of the Business Case for the LTC, which should hold this info, has been put in by TCAG. The date by which HE legally should have responded passed, we followed it up, only to get the following reply:

I am writing in connection with your request for the Business Case for the Lower Thames Crossing that you sent to Highways England on the 12 December 2020.

I can confirm that Highways England did receive the request at the time but unfortunately due to an administrative error at our Customer Contact Centre (CCC) it was not progressed for further action. It appears that the reason this happened is that the CCC Advisor has believed that this request was the same as your request for the Appraisal Summary Table (AST) request that was received on the same day within an hour of this request and therefore duplicated it to the AST request on their system and not
forwarded the request on.

Please accept my sincere apologies for this and any inconvenience this delay may have caused. We have now located your original request with CCC system and this has been forwarded to the Lower Thames Crossing team for action and response, and we hope to have a full response to you as soon as possible.

So yet another example of HE/LTC’s inadequacies it seems. We will of course keep you updated as we hear more!

TCAG’s Freedom of Information Request to HE for the ‘Business Case for the LTC‘ – https://www.whatdotheyknow.com/request/lower_thames_crossing_business_c