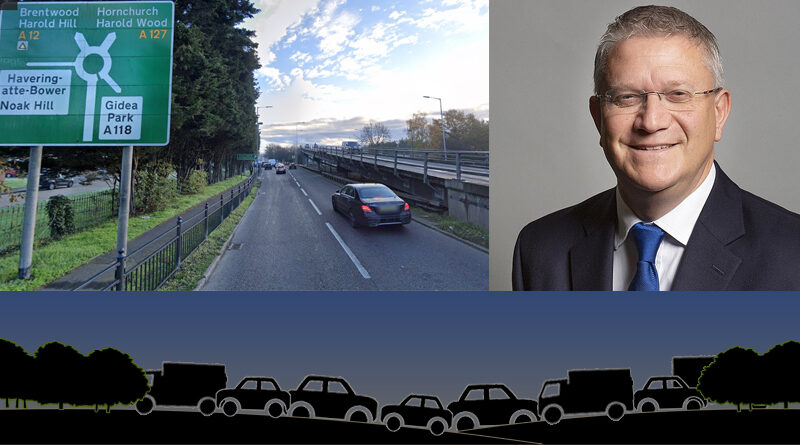 In Nov 2020, Romford MP Andrew Rosindell asked about Gallows Corner in the first ever virtual Prime Minister’s question time.  He asked, “As part of the government’s plans to ‘Build Back Better,’ will the prime minister commit today to guarantee the necessary finding to replace and reshape this junction? Especially as it will form a major route to and from the new Lower Thames Crossing.”

The PMs response, “I can assure my honourable friend that we are working with TfL to see what we can do to resolve the issue of Gallows Corner, and we will update him in due course.”

Mr Rosindell is not the only one to have concerns over the impact of the proposed Lower Thames Crossing on local roads and routes, we have been raising this as one of our many concerns for sometime now.  It is not only the impact to the actual roads with regard to congestion and pollution, but also the false economy of the situation.  The current estimated cost of the LTC is now up to £8.2bn of taxpayers money, but this doesn’t include everything that would need to be spent as a direct result of LTC if it goes ahead.  For instance the Tilbury Link Rd and Rest and Service Area, both of which were removed from the LTC scheme, but are being discussed and progressed now as seperate stand alone projects, ie outside of the LTC cost.  BlueBell Hill improvements in Kent are another example at a current estimated cost of 142m, and again being progressed as a result of LTC.  We believe there are many instances of this, and it appears that Mr Rosindell has questions and concerns over the LTC impact to Gallows Corner too.

We have since been in touch with him expressing our concerns about LTC and his comments on the impact it would have to Gallows Corner and local roads/routes, this is his reply:

Thank you very much for contacting me, regarding the Lower Thames Crossing (L.T.C).

I would like to thank you for taking the time to raise this matter with me personally.

I appreciate the concerns you have raised about the Lower Thames Crossing, and given the scale of the project, I agree that it is important that the project is thoroughly scrutinised.

In particular, I agree with your point that it is important the impact on how traffic will migrate between the crossing is considered.

These points must work efficiently to ensure that congestion is limited, to avoid an increase in particulate pollution and prevent any damage to those living in the affected areas.

However, I do recognise that action needs to be taken to deal with the congestion and pollution caused by the current Dartford Crossing, and I believe that the L.T.C., if delivered successfully, will help to do this.

Of course, it is vital that any proposed solution to the existing problem is effective and does not make the situation even worse.

I agree with you that it is important to consider more than just the financial benefit of the project, and I am glad to see that the effect on the environment and communities have been taken into consideration during the design of the L.T.C.

I have passed on the points you have raised to my colleagues in the Department for Transport, and I have been assured that all of the costs and benefits have been considered as part of designing this crossing.

Thank you again for getting in touch to share your concerns, and if you would like to discuss this or any other issue with me further, please do not hesitate to get in touch at any time.

With every good wish.

It’s important to keep raising our concerns about LTC with as many different people and organisations as possible, and this opened up the communications with another MP with concerns about the proposed LTC.