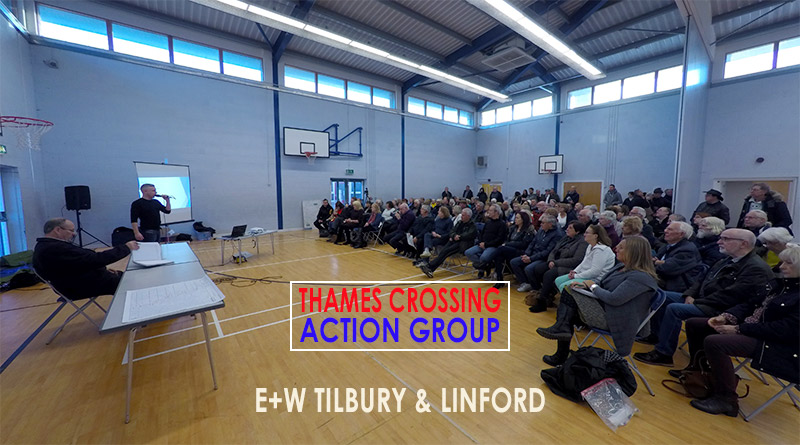 Members of the Public & Local Councillors

John Purkiss, Chair of The Welcom Forum, welcomed all to the Meeting and handed over to Matt Jackson

MJ welcomed all to the Meeting and briefly explained the planned format of the Meeting.

The following material was presented – Please refer to the PowerPoint and video recording of the Presentation.


Click the + and – to zoom in and out on the images, and the arrows to move through the presentation in the pdf above

Question/Comments from the Floor

Watch the video unfold as questions from the floor are requested. All questions captured in text below this video.

Q) Could MJ expand on all Pollution Levels ?

MJ explained that there were 17 AQMs in Thurrock but we could potentially see a further 7 AQMAs if pollution was directly linked to the number of vehicles crossing Thurrock.

Q) How many Schools will be affected by Pollution from C3. It was accepted that all would be affected.

MJ gave an example of an initiative run when he attended Torells School involving  the “Year of the Dot” Project as an example as to Schools informing all as to Pollution Issues, see YouTube. It was also suggested a competition could be launched involving local schools with pollution as the underlying message. Residential and Care Homes must also be included in all Pollution issues.

LB has emailed all Thurrock Primary Schools regarding Friends of the Earth Clean Air Schools Pack.  Encouraged anyone that has children at primary school in Thurrock to consider asking school take part.

The Meeting was informed Radio Kent had made a statement that an AQM at the A282 was being removed. Radio Kent’s Julia George was been Campaigning as to Pollution.

Q) Why has A14 not been considered

MJ explained that it was discussed with HE & the Gov but has been discounted.

A new Resident to Thurrock stated that we do not want any further Crossing in Thurrock. MJ agreed and went on to say that not enough was being undertaken as to £10m for the A282, when other similar amounts of money were being spent by the Council elsewhere.

Q) Was Noise Pollution in the Scoping Report?

MJ replied Yes and he expanded on Routes & Traffic being considered.

Our article on the EIA Scoping Report can be found here

MJ asked the Task Force Chair for comments as to recent work with HE and Peter Smith replied with a brief report on the work by the Task Force & this also included Noise Pollution.

Q) A local retired Scientist was very concerned as various raised sections C3 causing unacceptable amounts of noise and light pollution. Could more be considered to the use of further cuttings to reduce the amount of raised road?

Yes, this is being discussed by the Task Force.

Q) What is being considered as to traffic jams in both Kent and Essex? Also, Traffic Congestion in the immediate area of Thurrock?

MJ agreed that more required now to reduce traffic congestion but we as the TCAG Team required more help and assistance from all residents in the form of contacting the Task Force, Councillors, and HE as to pollution and traffic congestion.

Q) Gerard Rice has met with a Chinese Delegation in London as to an alternative Planned Eastern Route. They want to meet with Chris Grayling and Stephen Metcalfe to discuss this plan further. GR stated that HE are not aware as to who may fund C3. The Chinese Consortium is prepared to fund and collect tolls for a number of years.

Q) Ockendon resident very concerned as to the proposed deep road cuttings as certain areas are so badly contaminated that it has killed 3 herds of cattle. Some time was spent explaining the New Proposed Routes including the Ockendon Area.

LH mentioned that some of C3 and cuttings would include areas in Havering.

LH agreed that all must be considered by residents and more noise must be made by us and to shout out the message that we do not a further Crossing in Thurrock. No longer remain Silent.

Q) Where have HE Traffic Figure being sourced?

MJ this would have been sourced from recent real time data, maps, and modelling.

Q) Why have ANPR Cameras not been used.

MJ informed the Meeting that HE were now considering this as part of a smarter route analysis of the South East.

Q) We have the Technology in the UK so why cannot most of this be in Tunnels?

MJ agreed and this is being discussed with HE via the Task Force.

Q) Resident was very concerned and stated that we must not allow China to buy more parts of the UK and as such not allow them to buy the Eastern Alternative.

Q) Can you confirm whether land on the Mucking Rd is earmarked for LTC use?

MJ believed it was – indicated by the red line map.

Q) Resident comments pleased by the attendance at the Meeting but also disappointed as to the number as should be more. Full Protesting is the key.

MJ we need to use the young of Thurrock and also the Secondary Schools – better engagement and education.

Q) Resident is very worried as to Pollution and where can they buy Test Kits?

MJ replied that these kits can be bought from Client Earth. MJ did inform the Meeting that after repeatedly asking the Council as to all pollution issues he had not received a satisfactory reply, except pollution was not as bad as it is perceived. Orsett resident had bought a Test Kit from Friends of Earth.

MJ answered Yes but this should be a Top Priority with the Council as DPW and Tilbury Port expand.

Brian Little went on to say that it was the intention of the Council to reduce the number of AQMs but he had stopped this plan. More testing is required and more data collected so a full understanding of current pollution levels can be determined. These issues need to be resolved now and then build new roads.

Brian Little agreed this could be considered but long term data has to be collected for use. Jan Fawsitt wants to see future proofing and all pollution test data made available to the TCAG Team.

MJ went on to say that HE led all to believe the Consultation Period was only concerned with Option C but in March 2016, Andrew Jones, Transport Minister did inform all that Option A would also be considered. A Meeting was held in London with Andrew Jones to discuss all Options but Option A was the least favoured.

Q) Will tolls remain the same as to both crossings as if not this may impact on traffic flow and who will collect the tolls?

MJ believed it may be the same operators as at the Dartford Crossing but this would need confirmation at a later date.

Q) Resident suggested the use of an App to collect traffic data to use as a tool when confronting HE?

MJ said this is certainly possible but could not see the immediate value in it but would investigate further.

No further Questions or Comments at this point

Pollution is a major issue but other forms of transport are being considered and expanded on such as Trams. James has been working with CPRE Kent as to pollution issues. He went on to say that Dartford near the Crossing the Pollution Levels were extremely high but KCC were doing nothing to consider moving more freight by rail. It was made more alarming as Kent Ports are predicted to grow by 4% but nothing is being planned by KCC. There is the Tilbury-Gravesend Ferry and a Bus Service from Essex to Kent but these are only reducing traffic by small amounts. Tram Transport has to be considered.

Q) Resident asked as to the housing market and info?

MJ agreed to discuss this further with Councillors and report back.

The Meeting was informed that there would be an East Tilbury Meeting with HE and Stephen Metcalfe on Tuesday to discuss possible mitigation.

Ex Ford Worker gave an example that if you fight and protest that things can be changed so he implored that this was the case with the Crossing and do not give up and shout to be heard.

Resident asked as to more info on £20m Grant being made available to build a new school close to C3?

MJ was not aware of this and could not comment.

MJ thanked all for attending