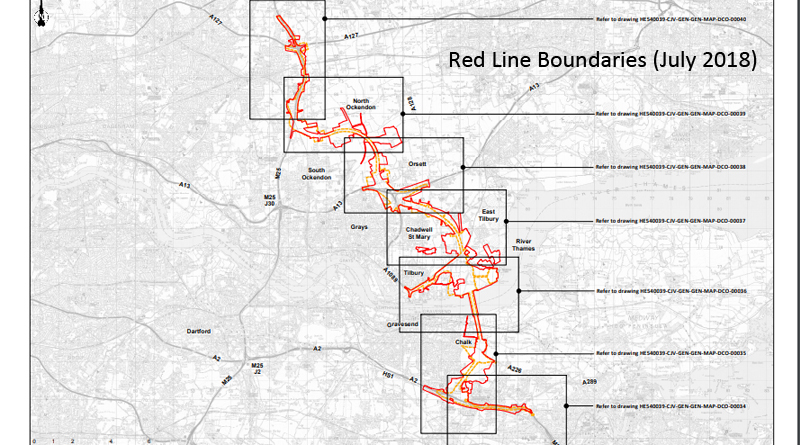 Here are the updated Red Line Boundaries (July 2018) taken from Highways England website.  An overview of the route followed by zoomed in maps of areas along the route.  In total the area has increased from around 12.76 sq km to 21.45 sq km.


Click the + and – to zoom in and out on the images, and the arrows to move through the series of maps in the pdf above.

Our understanding from Highways England is that there are now 2 less homes affected by these changes. However, we are also aware that at least one new property is now in the boundary that wasn’t before.  Highways England have, according to them, now written to all affected.

Explanations from Highways England as to why the recent increase in land taken shown in the updated red line boundaries (July 2018):

Why has the area of land been extended just north of South Ockendon and east of North Ockendon?
Flood compensation land, environmental mitigation land, utility diversions

Why has the large rectangular parcel of land north of Orsett been added?
Flood compensation land, environmental mitigation land

Why has the area west of Orsett been extended?
Flood compensation land

Why has the boundary been extended west of East Tilbury along Station Rd (north of Bowaters Farm)?
This area may be required for a temporary construction compound and for the diversion of utilities.  We require locations for operational infrastructure along the route of the Lower Thames Crossing and are considering a number of sites within the development boundary for those purposes including this location.

Why has the area east of West Tilbury been extended?
Flood compensation land

What are the two separate parcels south of Chadwell St Mary & west of West Tilbury for?
Flood compensation land

Why has land been added around East Tilbury?
This area is to provide land for environmental mitigation and some of it is for utility diversion

Why has the boundary been extended and additional parcels of land added near Coalhouse Fort near Tilbury and Coalhouse Point?
This area is to provide land for environmental mitigation

Don’t forget they haven’t got Development Consent Order yet, and there will be a consultation later this year, so make sure to help spread the word about these changes so as many people as possible are aware and ready to take part in the consultation.  Together we are stronger!