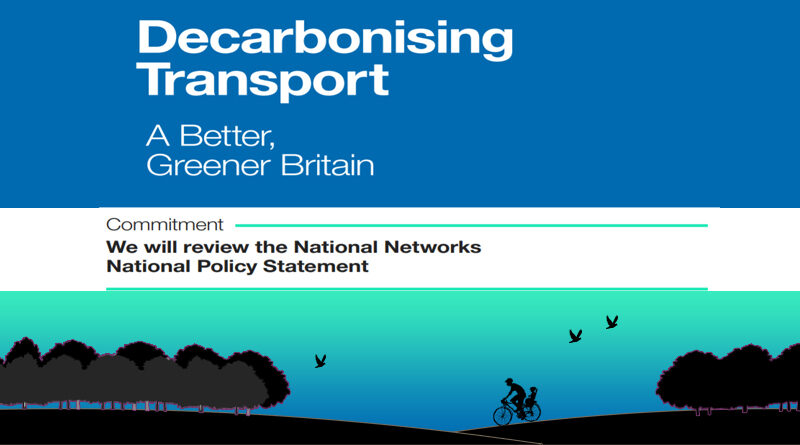 You may remember we submitted our response to the Transport Decarbonisation Plan Consultation in August 2020.

With the proposed LTC estimated to emit over 5 million tonnes of carbon emissions, and the fact we are facing huge climate change issues, this new report is of great importance and relevance to our fight against the LTC.  All eyes are on the UK as host of COP26 in Glasgow in Nov this year.  So will our Government be stepping up with actions to back up all the talk?  How will this new Transport Decarbonisation Plan help us, as a country, move towards the necessary actions we need in this time of climate emergency, when the need for decarbonisation is needed now more than ever?

In regard to road building, and our fight against the proposed LTC, the main point of interest to jump out at us in the newly released info was the fact that the Government have finally agreed to review the roads policy, more formally known as the National Policy Statement for National Networks (NPSNN), This is the same policy that Transport Action Network (TAN) were calling for to be reviewed in their second legal challenge.

To be clear the roads policy is what the LTC will be examined against to check if it is policy compliant.

As mentioned one particular reason there is a need for this review is due to the fact that the roads policy doesn’t take things like the Government’s legal commitment to Carbon Net Zero into account, where it is so outdated.  So when the policy is reviewed it should also see that the policy is updated to reflect the need to take Carbon Net Zero into account, since it is something that is enshrined in UK law.

However, whilst initially this is definitely a step in the right direction, and great news for TAN in regard to their legal challenge, we need to be aware that the proposed LTC will be examined against whatever the current policy is at the time the DCO application is submitted.

So the big question for us now is whether the roads policy will be suspended whilst it is reviewed.  If it is suspended then no decisions on road projects could be made until such time as any suspension is lifted, which would hopefully come after the policy is reviewed and updated accordingly.

If as we anticipate the policy is updated to reflect the legal commitment to Carbon Net Zero, the proposed LTC would fail to comply with over 5 million tonnes of carbon emissions predicted.

We have to agree with this statement, if the Government admit the need to review the policy due to the fact that it doesn’t reflect what is now enshrined in UK law, in regard to Carbon Net Zero, then surely it must also be the case that the road projects should be reviewed on the same grounds.

But for now we have to wait for the next Government announcement, and/or any further updates from TAN in regard to this latest news about the roads policy review to see exactly what impact it could have on our fight against the proposed LTC.