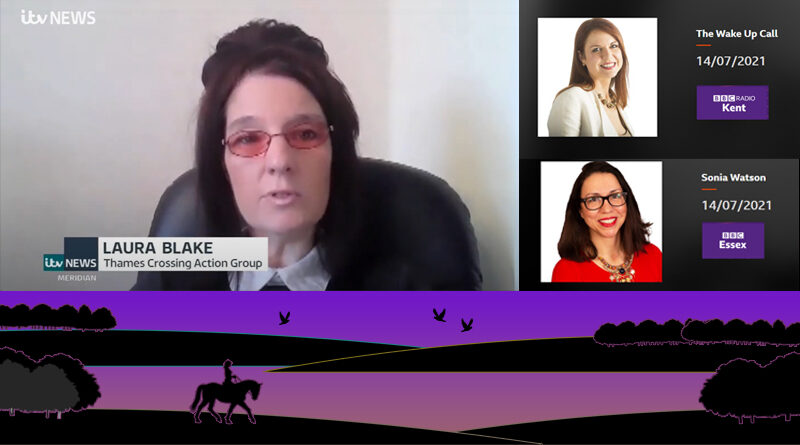 We thought it may be helpful to have a page to some of the TCAG media coverage for the LTC Community Impacts Consultation updates and links.

On consultation launch day, Weds 14th July TCAG started our media interviews with a chat live on air with Anna Cookson on BBC Kent Radio just after 7am.

Anna first spoke to their reporter Jo who was on location near St Mary’s Church, Chalk chatting to locals, and then Anna spoke to TCAG, Laura Blake about the LTC and consultation (from around 06:10)

There was further discussion about LTC and then Anna went on a bit later to chat to LTC Exec Director, Matt Palmer (from around 06:11), and after that Gravesham Council leader, Cllr John Burden (from around 11:30)

Thanks to BBC Kent Radio for permission to share the clips above.

Next it was onto BBC Essex Radio to chat with Sonia Watson just after 8am.

Listen again to TCAG Chair, Laura Blake speaks to Sonia, followed by local resident Lesley Quigley speaking to Sonia from around 06:40 into this clip.

Sonia chatted more about the LTC consultation, and then had LTC Exec Director, Matt Palmer on to chat from around 05:40

Thanks to BBC Essex Radio for permission to share the clips above.

We then did a pre-record interview with James Dunham for ITV News Meridian, which went to air later in the day in the evening news, and also aired on ITV News Anglia, with a chance it may also air in the London region too.

Thanks to ITV News Meridian for the interview