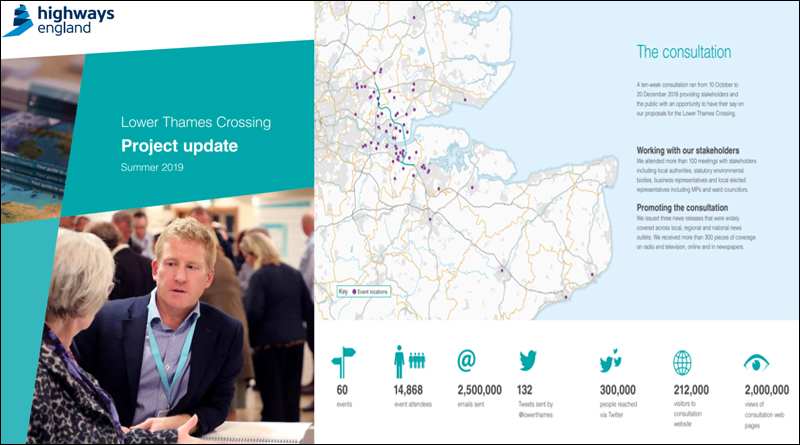 The full update can be found at – https://highwaysengland.co.uk/lower-thames-crossing-project-update-summer-2019/

What have they told us?

The consultation received 28,493 responses, including 2,117 campaign responses and responses from 55 prescribed consultees. Responses were submitted in several formats, including 25,210  online responses, 945 feedback forms (both by email and via the post) and 221 free-text letters and emails.

So what is their summary of responses?


Click the + and – to zoom in and out on the images, and the arrows to move through the document in the pdf above.

Notice how the summary of response to question 1a gave the result they were trying to obtain by using the wording that they did!

Many of us will agree that a new crossing is needed, but there question was specifically about the proposed Lower Thames Crossing as the design showed at time of consultation.  Wording like this is how they manipulate the responses to get the results they want!


Click the + and – to zoom in and out on the images, and the arrows to move through the document in the pdf above.

Your chance to discuss and ask project related queries

Highways England are holding some events for local communities to go and discuss the report and other project related queries with their  team at the following locations:

Highways England should be using the consultation response analysis to ‘improve’ and develop their Development Consent Order (DCO) application, which they now intend on submitting in Summer 2020.  HE will continue to share design updates with stakeholders and communities, and may need to consult further on proposed changes.

You might remember we have commented previously that we anticipate that HE will hold a targeted consultation. Now we just have to wait for further announcements!

Summer 2020 – Submission of DCO application (the Planning Inspectorate has 28 days to decide if the application meets the required standard to proceed, including whether HE’s consultation has been adequate).

2020 – Pre-examination of DCO application. (At this stage anyone can register with the Planning Inspectorate as an interested party and make formal representations about the project)

2021 – Recommendation (The Planning Inspectorate will make a recommendation to the Secretary of State for Transport within three months of the end of examination period).

2021 – Decision (The Secretary of State then has three months to issue a decision. This will be followed by a public announcement.  If approved construction could begin soon after).

2027 – This is when HE expect to open LTC to traffic if the DCO is granted.

As you can see there is still a long way for HE to go with the proposed LTC.  We anticipate there will be a targetted consultation and it is important that at such time as many people as possible are aware and take part.  Each consultation stage of LTC has resulted in unprecedented amounts of responses, which has taken extended periods of time for HE to analize.  Let’s keep that pattern going and ensure we give them as much feedback as possible at any future consultations!

HE are also still waiting to find out about funds being allocated for LTC since the Chancellor’s announcement in Autumn 2018 that PFI/PF2 (private) funding was being abolished.  Changes to the project and time delays must also be pushing the cost up.  It could even be possible that the price will rise so much it ends up no longer being financially viable, only time will tell!

We are also aware that it is a time of great change/debate in British politics at the moment.  We can expect the announcment of a new Prime Minister in the very near future.  With that there is likely to be a change in cabinet, which could mean a new Secretary of State for Transport.  Who knows who we will end up with and what their take on LTC will be.  Again time will tell.

To summerise, Highways England haven’t even applied for the DCO, let alone been granted permission. We still have chances to voice our opinions and must continue to do so at every given opportunity!  Together we are stronger!