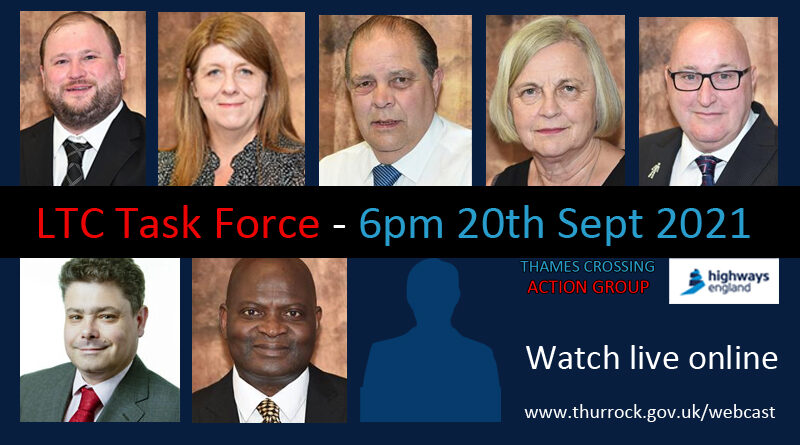 Whilst TCAG were not in attendance at the September 2021 LTC Task Force meeting on the 20th (click here for the reason why).  We did however tune in to watch the recording of the meeting.  We would normally watch the live webcast, but due to a last minute relocation of the meeting, due to flooding and electrical issues at the council offices, the meeting was moved to The Beehive in Grays, and live webcast was not possible.  The meeting was recorded and later shared online.

The meeting is available to watch again online, and our update covers some of the highlights.

It was announced that Thurrock Council (and other impacted Local Authorities) were given an extension until Weds 6th Oct 2021,  to submit their LTC Community Impacts Consultation responses.  The council highlighted to HE/LTC the difficulty in preparing the response and getting it through governance (ie getting the response signed off through council process) during summer holidays, and the extension was granted.  They did also request similar extension for the public, which was declined by HE/LTC.

They then moved on to give a summary of how the council’s consultation response was broken down.

Firstly they passed comment on the adequacy of consultation, and whether they believed it was compliant with the relevant policies.

Then they moved on to express their concerns over serious issues with the transport modelling, which makes it hard to fully and adequately be able to assess things.  Also the fact that it doesn’t appear to look at any other alternatives, which is the norm with such projects, and the council don’t believe this has been done sufficiently.

Moving on they had covered the negative aspects of the local impacts and lack of benefits, and that they don’t believe that there is adequate long term mitigation planned for the issues LTC would create if it goes ahead.

The response also covers the fact that the LTC doesn’t address things like changes to travel patterns in the future, including those that would be a result of the Government’s new decarbonisation agenda.

It was commented that there is no commitment to legally provide adequate employment and skills commitments for local people and suppliers.

Things like Climate Change and Decarbonisation were also commented on in more detail in the response.

A section about Legacy, which focused on the Council’s Hatch Report, and the lack of progress in discussions of the points raised in the Hatch report.

Comments were made in regard to the inadequate, missing, and late critical data as part of responses about technical matters and process.

Also a section on Utility Relocations, and how 4 of the utility relocations that would be needed, if LTC goes ahead, would need to be Nationally Significant Infrastructure Projects (NSIPs) in their own right in addition to the LTC.

There are also comments on the Technical documents that were provided as part of the consultation that also form a part of the response.

It was reported there are 174 land parcels in Thurrock’s ownership and comments were made in a broad way as the council have not been provided with the detail, which is largely the basis of the comments made.

Thurrock Council’s response was worked on and prepared by a team of around 30-40 technical specialist and council officers over a period of around 6 weeks.

Cllr Massey commented that since he had joined the LTC Task Force there had always been data that the council were waiting on from HE/LTC and asked what missing data was considered to be most relevant at this stage.

It was explained that HE/LTC take their figures for average traffic modelling for peak hour morning between 7-8am, whereas in Thurrock the actual peak hour in the morning is between 8-9am for local roads, and to date no information had been provided by HE/LTC to show their chosen modelling hour is appropriate for representation of the morning peak hour traffic.

And finally in response to that question was the Health Impacts Assessment data that is proving to be a very long and drawn out process.

These are considered to be the main three things, and with this kind of information being absent it is very difficult for the council to form any other opinion of the LTC other than a negative one.  Along with the gloss that the council feel the HE/LTC have put on some of the data, in particular the Ward Impact Summaries whereby they have attempted to give the impression that the mitigation will be adequate for the impacts, when in the council’s opinion that really isn’t the case.

Cllr Muldowney brought up the issue and concerns about air quality and health impacts, and asked what the chances were of getting HE/LTC to make any changes to take the route further away from residential areas.

The council commented that they share the same concerns and have asked HE/LTC to share the evidence to show that the air quality would be within limits, and so far they are not satisfied they have been provided that information.

Also that they had asked HE/LTC, in light of the fact that the A13 junction in particular is very limited on movements for details to show comparisons of variations of the route/junction to show how they reached the decision of the junction design, so the council can also assess this, and so far it hasn’t happened.  Also the fact that HE/LTC had failed to share adequate data about the impacts to local roads to show whether mitigation was adequate or not in regard to how junctions had been designed.

Members were also reminded that HE/LTC are not taking into account any of the impacted Local Authorities Local Plans, and the problems that ignoring these plans could and likely would bring due to increases in traffic and the positioning of development near to the LTC, if it goes ahead.

Further comments were made that suggest that the council do not believe that the consultation to date has been adequate and meaningful, so there would be further reason to report as such in the Adequacy of Consultation representations when HE/LTC resubmit their LTC DCO application, whenever that might be.  After that there would be opportunity for Local Authorities to make a Local Impact Report which is a technical analysis, and for all who are registered as Interested Parties to make written representations.