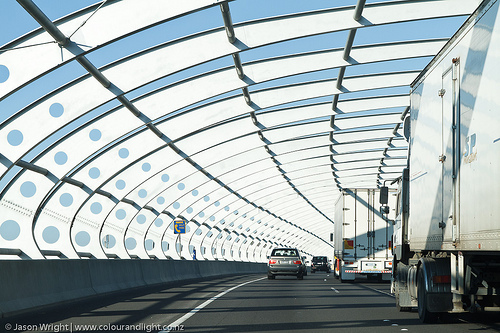 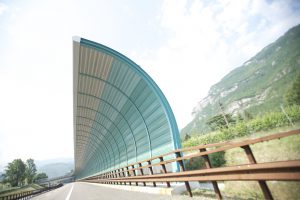 This is the collective sound energy emanating from motor vehicles. It consists chiefly of the road surface, tyre, engine/transmission, aerodynamic, and braking elements. In developed and developing countries, roadway noise contributes a proportionately large share of the total societal noise pollution. It contributes more to environmental noise exposure than any other noise source.

Roadway noise pollution began to be measured in the US in a widespread manner in the 1960s when computer modelling of this phenomenon was perfected. After the passage of the National Environmental Policy Act [USA] and Noise Control Act [USA], the demand for detailed analysis soared, and decision makers began to look to acoustical scientists for answers regarding the planning of new roadways and the design of noise pollution mitigation.

Partial bans on motor vehicles from urban areas have been shown to have minimal impacts on reducing sound levels (as would become clear from later modelling studies); for example, the partial ban in Gothenburg, Sweden resulted in the minuscule reduction of sound levels.

Regulation in the EU and Japan of tyre and powertrain noise has only sought to reduce noise by approx. 3 dB, and will only slowly take effect because a few older noisier vehicles can dominate the soundscape. 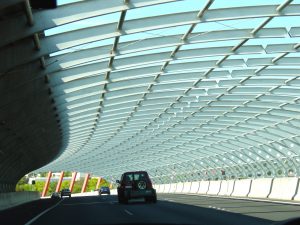 The intensity of roadway noise pollution is governed by the following variables: traffic operations (speed, truck mix, and the age of vehicle fleet), roadway surface type, tyre types, roadway geometrics, terrain, micrometeorology and the geometry of area structures. At lower speeds and/or when accelerating / braking, engine & powertrain noise can dominate.

Traffic operations noise is affected significantly by vehicle speeds since sound energy roughly doubles for each increment of ten miles an hour in vehicle velocity; an exception to this rule occurs at very low speeds where braking and acceleration noise dominate over the aerodynamic noise. Small reductions in vehicle noise occurred in the 1970s in the USA as provinces enforced unmuffled vehicle ordinances. The vehicle fleet noise has not changed very much over the last three decades; however, if the trend in hybrid vehicle use continues, substantial noise reduction will occur, especially in the regime of traffic flow below 35 miles per hour.

HGVs contribute a disproportionate amount of noise not only because of their large engines, but also the height of the diesel exhaust and the aerodynamic drag. Significant interior noise is usually present inside moving motor vehicles; in fact, passengers are generally not aware that these levels are high because experience has led motorists to expect levels commonly exceeding 65 dBA.

Roadway surface types contribute to different noise pollution levels. Of the common types of surfaces in modern cities, there is a 4 dB difference between the loudest and the softest: chip seal type and grooved roads being the loudest and concrete surfaces without spacers being the quietest and asphaltic surfaces being about average. Rubberized asphalt (which uses recycled old tyres) is much quieter and is already widely used in the USA. Experimental poroelastic road surfacing might halve road noise.

Tyre types can cause 10 dBA variations in noise, based on a 2001 sample of 100 commercially available tyres. As of 2001, there was no correlation between grip and noise. Quieter tyres may have slightly lower rolling resistance. Tyre labelling for noise, grip, and rolling resistance has been widely introduced in Europe, with noisy tyres being taxed.

Roadway geometrics and surrounding terrain are interrelated, since the propagation of sound is sensitive to the overall geometry and must consider diffraction (bending of sound waves around obstacles), reflection, ground wave attenuation, spreading loss and refraction. A simple discussion indicates that sound will be diminished when the path of sound is blocked by terrain, or will be enhanced if the roadway is elevated so as to broadcast; however, the complexities of variable interaction are so great, that there are many exceptions to this simple argument.

Micrometeorology is significant in that sound waves can be refracted by wind gradients or thermoclines, effectively dismissing the effect of some noise barriers or terrain intervention.

The geometry of area structures is an important input since the presence of buildings or walls can block sound under certain circumstances, but reflective properties can augment sound energy at other locations. 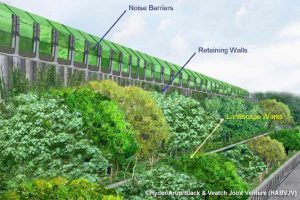 A noise barrier (also called a sound wall, sound berm, sound barrier, or acoustical barrier) is an exterior structure designed to protect inhabitants of sensitive land use areas from noise pollution. Noise barriers are the most effective method of mitigating roadway, railway, and industrial noise sources – other than cessation of the source activity or use of source controls.

In the case of surface transportation noise, other methods of reducing the source noise intensity include encouraging the use of hybrid and electric vehicles, improving automobile aerodynamics and tyre design, and choosing a low-noise paving material. Extensive use of noise barriers began in the United States after noise regulations were introduced in the early 1970s.

Noise pollution barriers have been built in the United States since the mid-twentieth century when vehicular traffic burgeoned. In the late 1960s, analytic acoustical technology emerged to mathematically evaluate the efficacy of a noise barrier design adjacent to a specific roadway. By the 1990s, noise barriers that included the use of transparent materials were being designed in Denmark and other western European countries.

The best of these early computer models considered the effects of roadway geometry, topography, vehicle volumes, vehicle speeds, truck mix, roadway surface type, and micro-meteorology. Several U.S. research groups developed variations of the computer modelling techniques: Caltrans Headquarters in Sacramento, California; the ESL Inc. group in Palo Alto, California; the Bolt, Beranek and Newman group in Cambridge, Massachusetts, and a research team at the University of Florida. Possibly the earliest published work that scientifically designed a specific noise barrier was the study for the Foothill Expressway in Los Altos, California.

Numerous case studies across the U.S. soon addressed dozens of different existing and planned highways. Most were commissioned by state highway departments and conducted by one of the four research groups mentioned above. The U.S. National Environmental Policy Act effectively mandated the quantitative analysis of noise pollution from every Federal-Aid Highway Act Project in the country, propelling noise barrier model development and application. With the passage of the Noise Control Act of 1972, demand for noise barrier design soared from a host of noise regulation spinoff.

By the late 1970s, more than a dozen research groups in the U.S. were applying similar computer modelling technology and addressing at least 200 different locations for noise barriers each year. As of 2006, this technology is considered a standard in the evaluation of noise pollution from highways. The nature and accuracy of the computer models used is nearly identical to the original 1970s versions of the technology.

Noise barriers force the pollution plumes coming from the road to move up and over the barrier creating the effect of an elevated source and enhancing vertical dispersion of the plume. The deceleration and the deflection of the initial flow by the noise barrier, force the plume to disperse horizontally. A highly turbulent shear zone characterised by slow velocities and a re-circulation cavity is created on the lee side of the barrier and further enhances the dispersion; all of which result in a well-mixed zone with lower pollutant concentrations downwind behind the barrier.