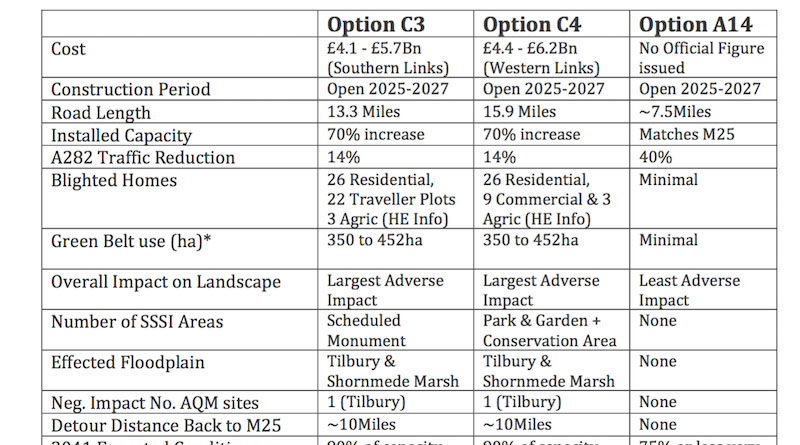 I’m sure you will agree, after reading data associated with Option A Route 14, you will be astonished as the research group were and why has this route discounted when it offers so many benefits?

Option A Route 14 mitigating Air, Noise & Light Pollution for the majority of the Thurrock Borough & Dartford residents in Kent. The route doesn’t blight such high numbers of residents of Kent & Thurrock. The route also has the highest take-up of 40%. Thus reducing the existing A282 crossing for local users exclusively. The route has the lowest green belt land take, and the lowest of all land takes regardless of classification. Option A Route 14 is the only route that keeps motorists on track without adding further burden to other road networks in the region.

Option A14 is the missing link and serious consideration should be given as such. Its the only option that completes the M25 as a motorway for its entire orbit around London. Why spend money on a route like Option C, when it doesn’t tackle the biggest issue of all, keeping the A282 moving in both directions.

The Group Remains ‘No More Crossings in Thurrock’…

We need to be informed and abreast of what’s on the table for discussion – We hope you understand!

Please take the time to read the following information…

even if it’s just the table below.

The information provided in this chart has been extracted from the 2016 Highways England Consultation Pack. Found here > Highways Consultation 2016

The above table illustrates Option A Route 14 performs the best environmentally out of the three route options considered here. Noted by offering the best reduction in potential accidents, least Green Belt land take, least impact on biodiversity, and the best by far improvements for air quality over a 60-year period (Reduction of 693,000t of Greenhouse gasses) for all areas concerned.

The Thames Crossing Action Group (TCAG) are astonished this option was removed at a very early stage, based on an estimated ‘high-level Review’ cost impact. Highway’s England used the term ‘approximately twice that of Option A1’ with very little evidence to back this up. To clarify, Option A1 was a tunnel under the Thames (approx. 1 mile in length), in addition to road-widening works on the north and southbound approaches of the A282 crossing. Option A Route 14 was a tunnel of approximately 7 miles in length, complete with revised slipways off the M25 for local routes using the A282 (See maps attached). It was bound to cost more due to the sheer scale of the proposal. However, it tackled every issue Thurrock & Kent residents have been fighting for, for many years!

TCAG strongly suggest the Government investigates Option A14 fully, given the environmental impact this route mitigates and the capacity it opens up with no diversions for the majority of M25 users.

Implementation costs should never be put before the health & well-being of the people, for the benefit of unsustainable growth in any particular area. These communities deserve better from the Government. What’s saved in construction cost will ultimately be ploughed back into the NHS supporting an unhealthy community. Please focus on the root cause and assess the wider impact Options C3 & C4 would have in this instance. Ie Greenhouse Gasses increased by 1,300,000t.

These communities deserve top level investment considering the wider UK economic benefit this route brings. Infrastructure investment has been extremely poor in the Thames Gateway for many years. It certainly hasn’t matched investment & growth levels seen in the private sector of logistics. It’s no wonder the roads of Thurrock & Kent are regularly blocked with HGV traffic.

Issues to highlight; Thurrock has been noted in recent DEFRA reports triggering 40μgm3 EU limit on air quality, 17 sites in the Borough of Thurrock alone. The Group understands Dartford also suffers in the same way with many AQM sites. Option A14 offers the best reduction of traffic at the A282 (40%), Option C (14%). Option A14 also offers resilience without a ~10mile detour.

Option A14 being a tunnel offers the shortest, cleanest route possible connecting the M25 in Essex to the M25 in Kent. It may not be the cheapest. However, Option A14 is the only viable option, completing the M25 Orbital Motorway efficiently.

Option A14 by-passes underground every hot spot currently experienced by ~140,000 motorists per day and the residents who live within extreme proximity (Ockendon, Aveley, Purfleet in Thurrock & Dartford in Kent).
Adverse Noise and Light Pollution also feature heavily for Option C3 and C4 proposals, including the huge green belt land take. Add to this a cocktail of uncontrollable combustion engine tailpipe emissions pumped out across a further 9 villages along the Route of Option C. Option A14 tunnel would offer the best means to mitigate pollution for The Thames Gateway Growth Plan while supporting road network capacity at the point of use.

Extracted from the 2016 Volume 3 Consultation Document 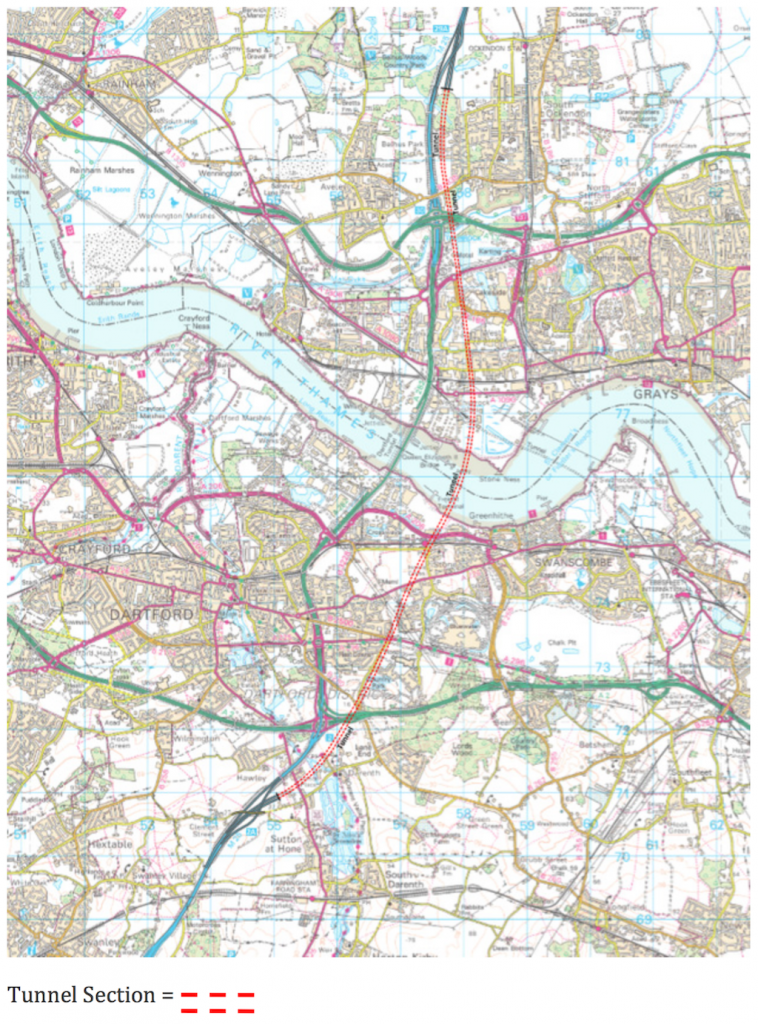 Linking the M25 in the North to the M25 in Kent, by-passing the hot spots of congestion with a long tunnel.

Redundancy comes naturally with least distance traveled to get back on the M25 via the A282 if an issue was to occur.

By default motorists would need to leave the M25 to take local routes via the A282 (Existing Crossing) J30, J1a etc. Reducing the Current Crossing by 40% or more! 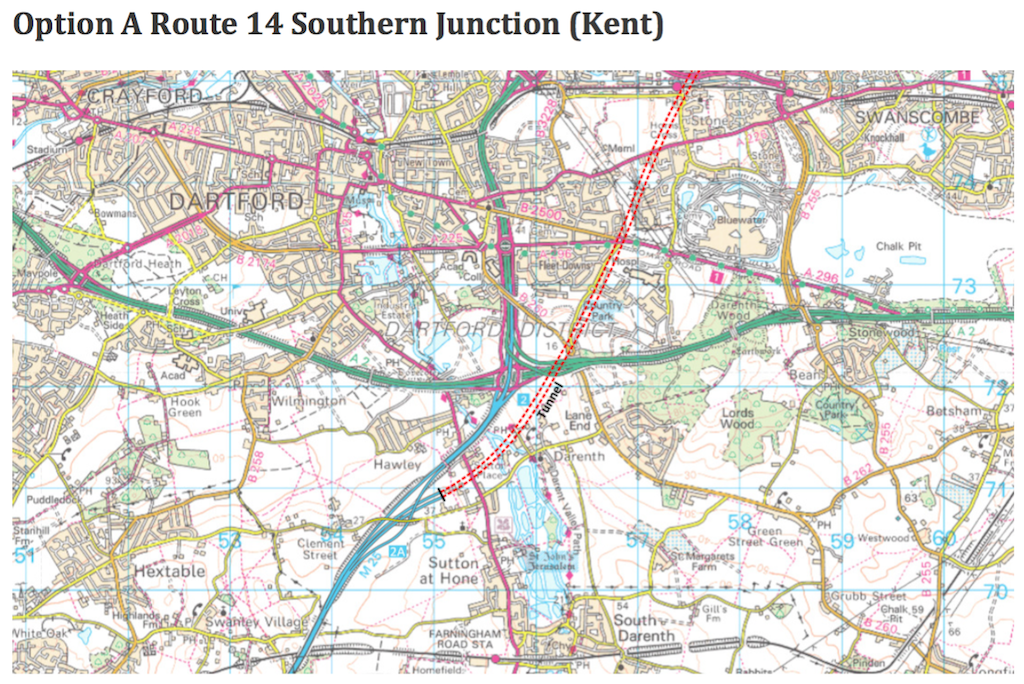 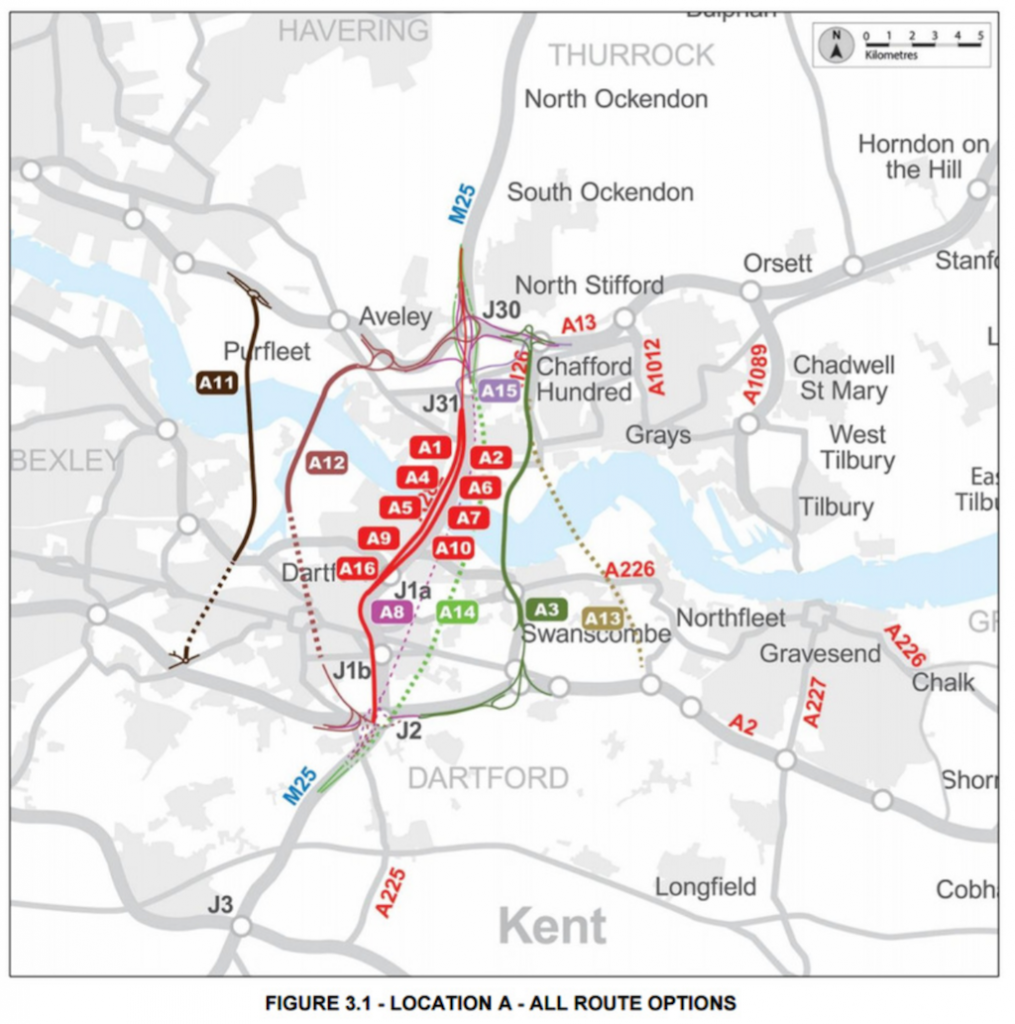 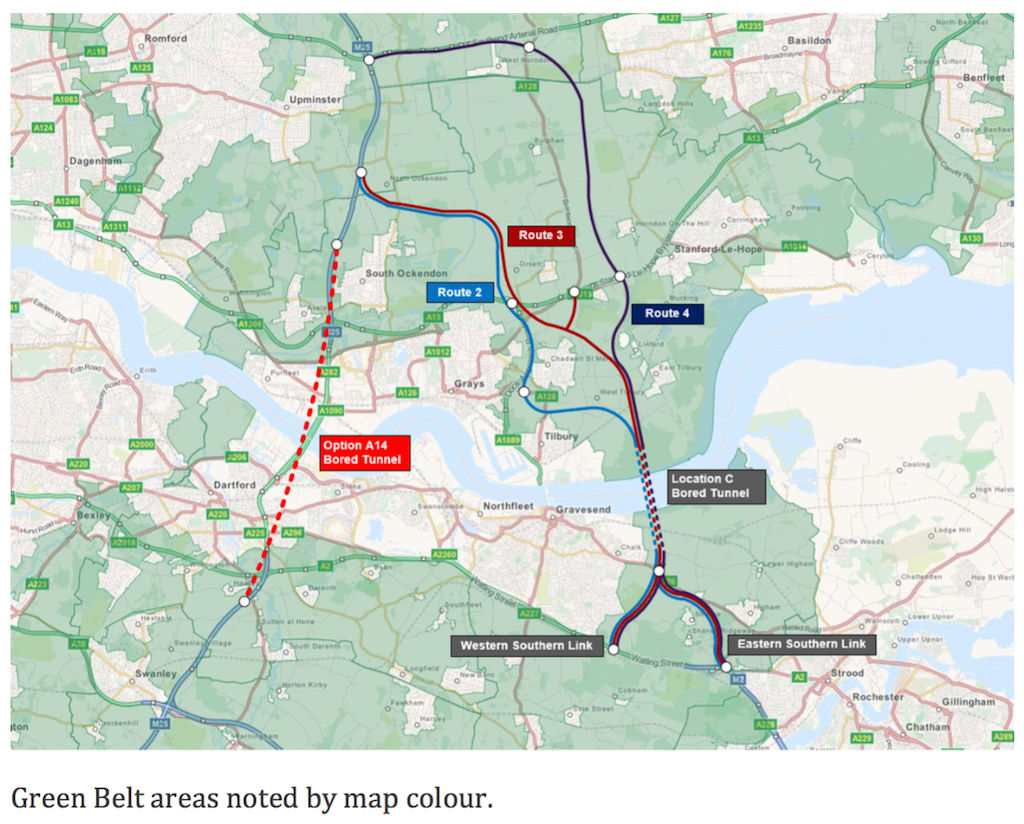