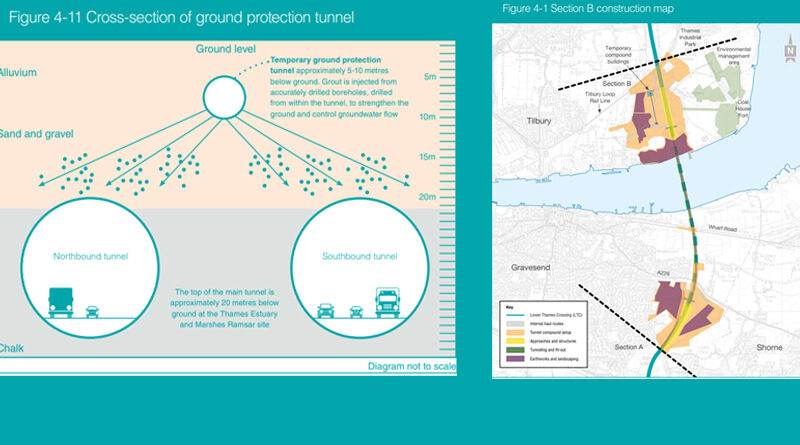 Find out more about the 2.6 mile LTC tunnel that HE are proposing, from construction to ventilation and operation.

The tunnel section of the proposed LTC tunnel would be the longest road tunnel in the UK. At 16m wide, these tunnels will be some of the largest bored tunnels in the world, according to HE.

Along their length, at 150m intervals, there would be approx. 26 cross-passages connecting the two tunnels for emergency use.

To construct the tunnel two million cubic metres of material would be dug from the tunnels and other associated works in the area.

How the tunnel would be bored

The tunnel would be bored using a huge closed face Tunnel Boring Machine (TBM).  This would be a huge machine as can be seen in this video where a diagram shows 4 double decker buses drawn along side the TBM to show the scale of the machine.  The tunnel bores would be constructed from the northern side of the river.

Remember all the bits of the Tunnel Boring Machine would need to be delivered to the site at some point too, so think about the logistics of that arriving.

Once tunnel boring begins it has to be run 24/7 and uses huge amounts of water, which once used would then by pumped to the surface, treated and then pumped into the River Thames.

Construction of the twin-bored tunnels and approach ramps is expected to take up to six years, if LTC goes ahead.

Who would be involved?

Despite the fact HE haven’t got permission for the LTC, the tunnels contract, which is currently said to be worth £2bn has already been shortlisted. 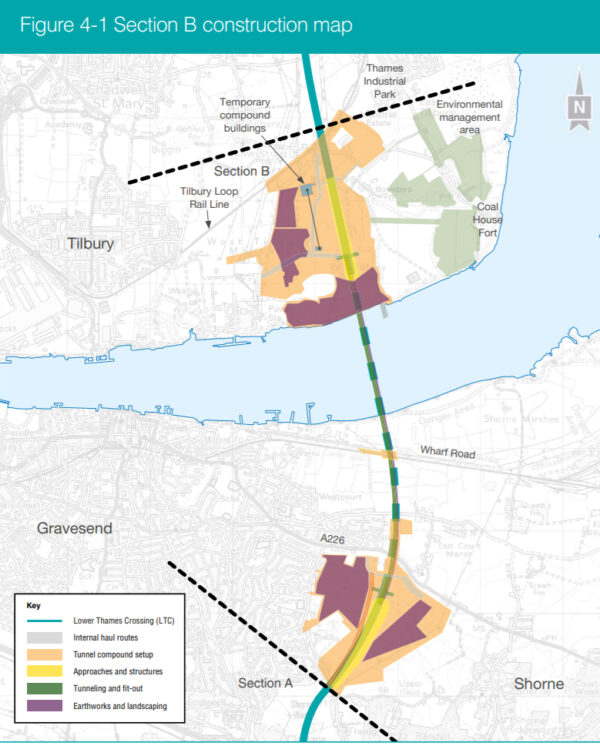 One the south side of the Thames, the changing ground conditions present potential risks to the TBM operation.  To reduce these risks the contractors may opt for ground treatment such as grouting or a ground protection tunnel before the arrival of the TBM. 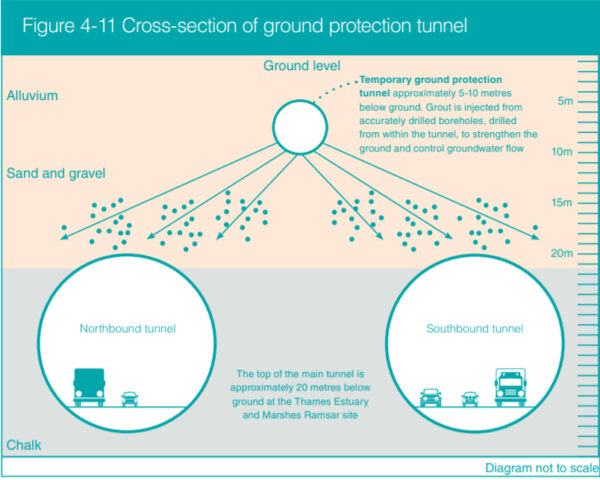 We’re not sure why they are only displaying two vehicles in the Northbound tunnel, it would be three lanes the same as the Southbound tunnel.

There would be accommodation for workers at the Northern Tunnel Compound, which would include 400 beds for construction workers and a further 80 beds for certain workers to remain in high-pressure compressed air environment following tunnelling work.

At the compound to the South there would be offices and welfare type facilities, but no sleeping accommodation.

Impact to river users and wildlife

Of course it’s not just wildlife on land that would be impacted by the proposed LTC, with it crossing under the River Thames other wildlife in and along the river would also be impacted.  There are endless species of birds that are found along the river, some stay longer than others with it being on the migratory path, but all would be impacted if the LTC goes ahead.  In the river there are seals, porpoises and other marine life.  And who forget when Benny the Beluga came to visit!  He arrived just in time to say NO to LTC back during the 2018 consultation and held up LTC investigative works in the river whilst he was here!

As mentioned above the water used during construction would be treated and then pumped into the Thames.  There would also of course be a lot of noise and vibration.

As well as the wildlife the river is obviously also used by many people, with the ports being the obvious ones, but also people using it for recreation, plus the ferry and clippers that use the river.  The proposed London Resort theme park is proposing to use the river for a Park & Glide service between the proposed parking facility in Tilbury across to the theme park on the Swanscombe Peninsula, if it goes ahead.  All would be impacted in one way or another if the proposed LTC goes ahead.

How air would be ventilated/filtered?

We first asked HE if they could tell us more about the ventilation shaft/chimneys that they would be proposing for the LTC tunnel portals.  Their answer was that there wouldn’t be any.  So of course we asked for more details about how the tunnels would be ventilated.  The response was rather worrying.

They said the pollution from the tunnels would disperse within about 200m of the tunnel portals.  Although we’re not sure where it is meant to go when it disperses, surely it’s got to go somewhere?  When questioned about the close proximity to the tunnel portals of the two newly proposed ‘parks’ (also read spoil dumping grounds) in relation to the pollution HE gave the reasoning that there are plenty of parks nearby to roads and that it is nothing to worry about, and not as bad as say living next to such pollution long term.  We don’t buy that.

This detail was disclosed at the August 2021 LTC Task Force meeting.

We have highlighted some of the concerns about the risk of flooding in and surrounding the tunnel portals before here.

Remember it’s not just a concern for those to the North of the river where the tunnel portals would be closest to the river and in flood plains.  Because any problems that would occur would have a knock on effect to the south of the river, if traffic can’t use the tunnel for any reason, including flood issues.  Plus ultimately think of the chaos if the future in flood predictions are correct and the crossings can’t be used longer term on a more regular basis.

Inside the tunnel once open

There would be lighting in the tunnel during the daytime and night, and in the event of an emergency.

There are no emergency areas within the tunnel.  A range of enhanced systems and response measures would be implemented to quickly detect and manage any incidents.

The tunnel is being designed to safely accommodate HGVs and hazardous vehicles.

The tunnel would also incorporate the latest fire safety technology.

There would be a control building at each end of the tunnel to provide facilities such as offices, monitoring and safety equipment, and various mechanical and electrical systems.

User Charges for the tunnel/LTC

You can find out more about the tunnel construction in the Construction Updates book from the Community Impacts Consultation materials.  On pages 44-47 gives an overview and then there is more detail in Chapter 4 from page 96.  There is also info in the Ward Impact Summaries (South and North) and the Outline Traffic Management Plan for Construction (OTMPfC) too.

In the Operations Update some detail on the tunnel can be found on pages 17 and 18.