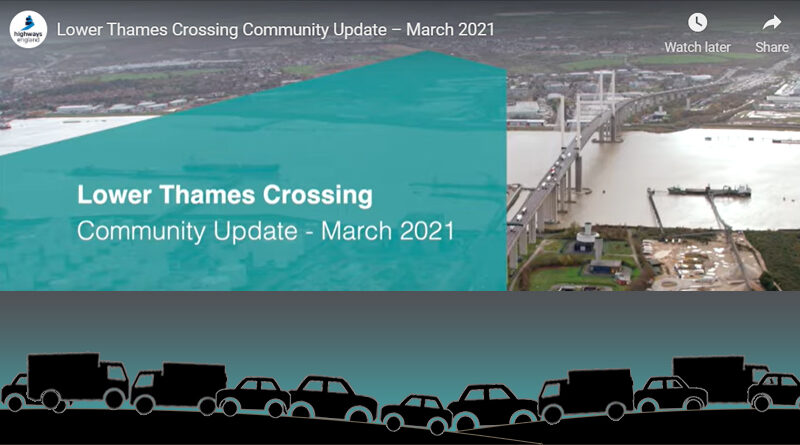 The HE LTC Community Update March 2021 has been shared publicly, and there are some interesting points to be aware of.

Take a look at the video:

You’ll see this at around 1:13 in the video, as well as the statement that the Dartford Crossing is now regularly used by over 185 thousand vehicles per day.

This means that the Dartford Crossing is currently 50-55 thousand vehicles per day over capacity, depending on which of the design capacity figures is actually correct.

Then at around 1:35 it is stated that the Lower Thames Crossing will take up to 36 thousand vehicles off the Dartford Crossing every day.

This official HE video clearly shows that the Dartford Crossing would still be over capacity even if LTC goes ahead, and that’s not even taking into account the predicted traffic growth by the time LTC opens, if it goes ahead, which is estimated to be around a 20% increase.

Obviously this is something we’ve been saying for a long time now, after digging deep enough into the LTC data, but it’s now making it even more obvious in this latest video for those paying attention to the figures!  Let’s not forget this is all at a cost of £8.2bn+ of taxpayers money. Does that sound like good value for money to anyone?!

We’d also comment on the wording used by HE in this update, again using language to try and mislead people into believing LTC is definitely going ahead, when they still haven’t been able to submit an acceptable Development Consent Order (DCO) yet, let alone been granted one!

HE have now replied to our email admitting they got their figures wrong in the March Community Update video:

The combined design capacity of the Dartford Crossing is approximately 135,000 vehicles a day, but on a busy day it can see over 180,000 vehicles cross. We do not claim this is the average daily figure, but is an accurate indication of the demand and challenge faced on a frequent basis. In our recent community update we incorrectly stated the capacity was 130,000 vehicles a day. We apologise for any confusion this may have caused.

When it opens to traffic we expect the Lower Thames Crossing to take over 13 million vehicles away from the Dartford Crossing every year, which will significantly ease congestion on the crossing itself and the surrounding road network.

We recently expressed the annual 13 million vehicles reduction as 36,000 vehicles a day in order to give an accessible indication of the scale of the reduction – this is 13 million divided by 365 days. It is an average figure and shouldn’t be taken as a precise forecast – that can be found in our traffic summary documents that were published as part of our consultations. The most recent document can be found in our document archive here.

The new crossing will add billions to the UK and local economy. As stated in our response to your Freedom of Information request dated 12 December 2020, the Outline Business Case that will contain more information on the economic benefits of the scheme is still being produced.

Regarding the community video we have issued a correction on YouTube as per the text below:

CORRECTION: At 01:12 and 01:35 seconds the correct wording should be ‘The combined design capacity of the Dartford Crossing is approximately 135,000 vehicles a day, but on a busy day it can see over 180,000 vehicles cross.’

The video features in the update on the Highways England LTC website – https://highwaysengland.co.uk/our-work/lower-thames-crossing/latest-news/community-update-march-2021/