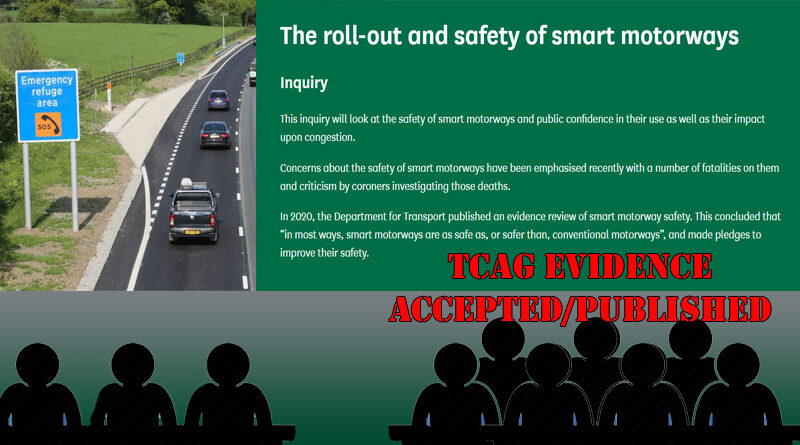 On the 26th of February 2021 the UK Government’s Transport Committee announced they are carrying out a ‘smart’ motorways public inquiry, which covers the role-out and safety of ‘smart’ motorways.

Whilst we have been told the proposed Lower Thames Crossing would technically be an all-purpose trunk road, Highways England have also stated that it will be designed to ‘smart’ motorway standards, with ‘smart’ technology.  This is of course a great concern, which is why we felt we needed to submit evidence on behalf of the group.

The call for evidence closed on the 9th April 2021.

Thames Crossing Action Group submitted the following evidence submission to the Transport Committee in response to this inquiry.

TCAG Evidence on Smart Motorways for the Transport Committee

NB. The redacted (blocked out) boxes on page 2 of the document are simply Highways England logos from the safety cameras, but all evidence has to be submitted without any logos appearing, so we redacted them.

Remember, the Transport Committee decide which evidence is accepted and published, it is not like a consultation where all responses have to be accepted, so we now have to wait and see if they choose to accept and publish  our evidence for this ‘smart’ motorways public inquiry.  We look forward to watching how the inquiry progresses!

Delighted to see that our evidence in this public inquiry has been accepted and published – https://committees.parliament.uk/work/1066/the-rollout-and-safety-of-smart-motorways/publications/written-evidence/?page=3

We will of course be following this inquiry with a lot of interest.

What is the Transport Committee?

The Transport Committee is nominated by the House of Commons to scrutinise the Department for Transport. Its formal remit is to hold Ministers and Departments to account, and to investigate matters of public concern where there is a need for accountability to the public through Parliament. It is chaired by Huw Merriman MP. You can follow the Committee on Twitter @CommonsTrans

You can also find more about the committee’s membership etc at https://committees.parliament.uk/committee/153/transport-committee/

This campaign, led by the awesome Claire Mercer, and with everyone’s help, is bringing a judicial review to force a legal stop to smart motorways in the names of everyone killed and hurt on these death traps.

Please show them some love and support, and donate towards their legal costs if you are able, and help spread the word by sharing.  Their website is https://smartmotorwayskill.co.uk/ where you’ll also find links to their social media channels.  Donations to legal costs can be made via their CrowdJustice page – https://www.crowdjustice.com/case/smart-motorway-jr/.

Sky News on the inquiry – https://news.sky.com/story/smart-motorways-inquiry-launched-by-mps-into-controversial-highways-amid-safety-fears-12229443

Inquiry Written evidence (being updated as evidence is accepted) – https://committees.parliament.uk/work/1066/the-rollout-and-safety-of-smart-motorways/publications/written-evidence/