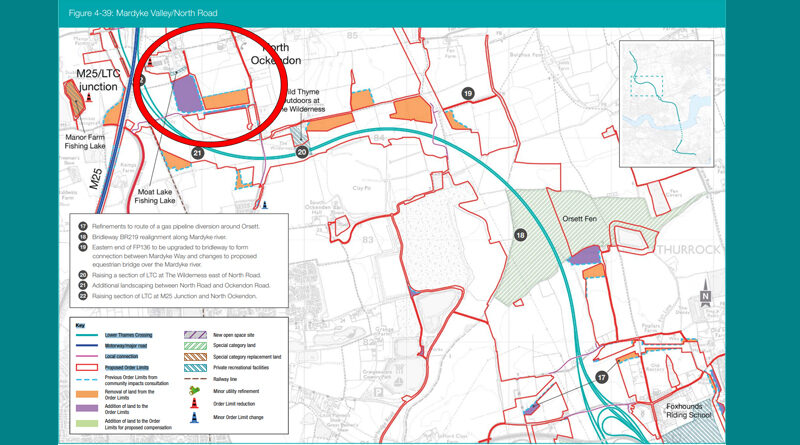 In the LTC Local Refinement Consultation (2022) National Highways sneakily moved the location of the eastern section of the LTC compound near M25.

We say sneakily because whilst the change in the development boundary was shown on the area map in the consultation guide (page 98/page 93 pdf), the detail to say that it was a construction compound being moved was only shown further on in the guide in the section about Private Recreational Facilities (page 136/page 129 pdf).

Hardly where you’d think to look to learn that a construction compound location had changed.

Also to note that construction compounds are not detailed on the latest LTC interactive map that NH released to support the Local Refinement Consultation. Not what we’d call clear and informative consultation materials.

This now brings the construction compound closer to the North Ockendon Conservation Area, in fact it butts right up against the boundary.

Questions have been asked of National Highways on this as info is lacking in the consultation guide.

Their response has been that this change is presented on Pages 9 and 26 of the Landowner engagement and minor refinements document.

They state that as a result of feedback from the London Borough of Havering and the landowner, the decision was made to move the eastern section of the previously proposed construction compound to this new location. The previous location off North Rd is a Site of Importance for Nature Conservation (SINC).

We have voiced concerns about them using this site previously not only because we knew it is a SINC but also because it is a very contaminated historic landfill.  The special invertebrates that have made the site home thus securing the special status, likely moved in because the site has had to be left alone for so long due to the contamination levels.

We note that NH are still proposing to use part of the SINC to allow for access off of North Rd onto their construction route to the new compound site.  We also note that NH were on the SINC for investigative works previously too, so may have already caused some harm to the habitat.

National Highways commented that the change is minor and localised and so they are not consulting on them in the Local Refinement Consultation. Hmmm isn’t the clue in the title you’ve given this consultation NH?  Local Refinement!!

The change to the location of the construction compound is not detailed on the LTC interactive map. In fact we can’t find any construction detail layer on the interactive map, so it doesn’t give a very good overall picture of what is being proposed by the project.

They state that the intended construction route access would remain the same as in the previous consultation. This appears to be traffic leaving North Rd onto Helipad Road and through the fields to the compound.

Whilst we appreciate the necessity to protect the SINC, we also see the need to protect the Conservation Area, and the impacts to residents in North Ockendon.  This is just another example that highlights that the proposed LTC is the wrong crossing in the wrong location, and should not go ahead.