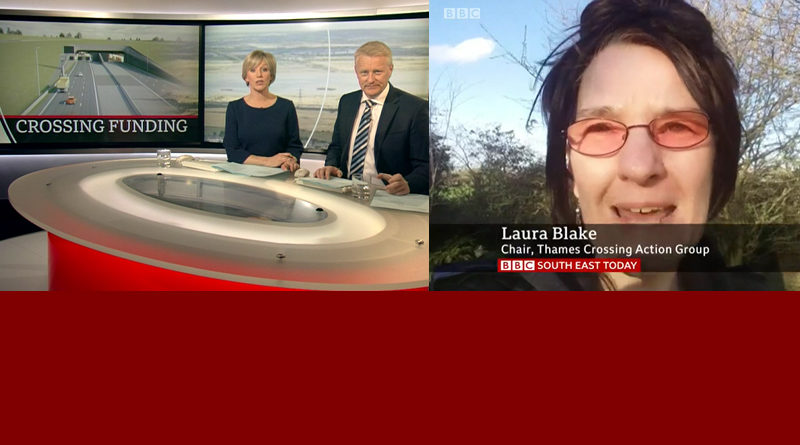 Not long after arriving at the info event at Linford on 11th March Thames Crossing Action Group Chair Laura Blake received a phone call from BBC South East asking her if they could do a Skype interview with her about the Budget announcement in relation to the proposed Lower Thames Crossing.  As mobile data reception was very hit and miss in the area, a reliable Skype connection couldn’t be obtained.  Instead Laura recorded her response on her mobile phone and attempted to upload to DropBox then share via email with BBC South East.

“I was having absolute nightmares trying to get a pretty large video file to update to Dropbox using mobile data, until a local resident kindly came to my rescue and allowed me to log into her home wifi, give my phone a quick charge, email the link to the video to BBC South East, and give them a quick call to ensure they had received it!” TCAG Chair – Laura Blake

Thank you to that resident, you know who you are!

Anyway, BBC South East got the video and a snippet of it was used within their piece on the 6.30 news.

Here’s a recording of the actual tv report last night!

We have filed a complaint with the BBC about the way this piece was presented in a biased way, it was misleading and factually incorrect.  A copy of our correspondence with the BBC over this can be viewed at www.thamescrossingactiongroup.com/tcag-complaint-emails-to-bbc/ and will be updated as things progress.