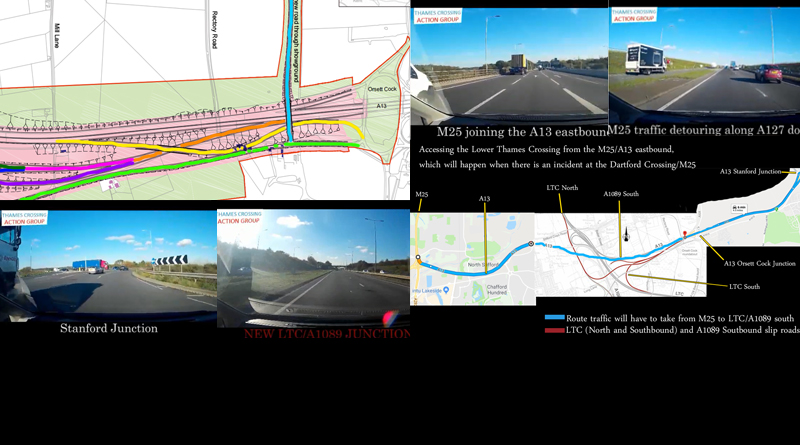 The A13/LTC junction will have an impact on a much bigger area than anyone expected prior to the latest consultation information being released.

We were all fearful of the A13 junction, ever since it was announced as a super spaghetti junction on steroids.  They told us it would all be lowered, going under the current A13.  Everyone wondered just how they would manage it, as it just didn’t add up that it could all be squeezed under the A13 around Baker Street/A13 area.

Now we know they have squished it down and spread it out further afield.  They have also removed various junction/connections, such as an eastbound slip off the A13 onto the LTC, a slip off the LTC to the A1089 southbound, a slip road off the LTC onto the A13 westbound.

It is worth noting that the slip road from the Orsett Cock down onto the westbound A13 will be realigned (shown in yellow on the map below).

The new slip road then goes over the LTC/A1089 slip road (marked in orange on the map below) and then lowers to join the A13 westbound finally merging around where Mill Lane in Orsett would intersect the A13 if it hadn’t been closed.

Also worth knowing that the LTC and A1089(south) share a junction off the westbound A13 (shown in orange on the map above).

It leaves the A13 just after you come under the new bridge across the A13 for the new road out of Orsett, the ‘new’ Rectory Rd that goes through the middle of the Orsett Showground (shown in light blue in the map above).  After leaving the A13 the slip road goes under the newly aligned slip road from the Orsett Cock onto the A13 westbound (shown in yellow on map above), and then splits in two directions.

The left hand of the split carries on and heads to the LTC (North)(shown as purple on the map above) with an option to also split off and loop back down southbound onto the LTC as this is also the route that a new slip road from the A1089 will come to join the LTC north or southbound.

What happens when the Dartford Crossing/M25 has an incident?

Just think of the chaos that will ensue when there is an incident at the Dartford Crossing/M25 with all the traffic having to detour any way it can to the Stanford Junction on the A13.

If traffic cuts from M25 along A13 to LTC

If traffic sticks to the A13 from the M25 to get to the LTC then it will have to head eastbound all the way to the Stanford junction, up around the traffic lighted roundabout (alongside all the DP World traffic), head westbound back along the A13 to just under the Orsett Cock roundabout and off at the LTC junction.  Of course that route will be busy and some traffic will use any route they possibly can to cut through, it would be chaos.

Alternatively, traffic could also try cutting westbound along the A13 from the M25 to the Blackwall Tunnel and/or through London to get across the river.

From the M25 to the LTC at the LTC junction (southbound)

Fact: LTC/M25 junction back to the M25 in Kent detouring via LTC is around 17 miles in distance.  At what point will traffic on the M25 clockwise consider it worth detouring those 17 odd miles?  Keep in mind that after an accident/incident traffic backs up another 1 mile every 90 secs.

Even if the LTC itself is accessible it will mean 5 lanes of M25 traffic (southbound) moving onto 3 lanes of LTC until it hits the 2 lane section around the A13 junctions, which will slow traffic flow even more, then back to 3 lanes and down to the A2.  At this point any traffic simply wanting to orbit the M25 will head westbound on the A2 back to the M25.

Alternatively, traffic could also easily start trying to cut through westbound from the M25 along the A127 and local roads to try and get to the Blackwall Tunnel or through London to get across the river.

If heading Northbound and the Dartford Tunnels have an incident

Traffic will come off wherever it can and try to get across to the A2/LTC junction to access the LTC Northbound.  As we all know there are plenty of routes to cut through, going through residential and rural roads, endless variants of rat runs to cut through.

What happens when there is an incident on LTC?

Just think of the chaos that will ensue when there is an incident on the LTC.

If the LTC tunnel is closed Northbound

If the LTC tunnel is closed Southbound

Traffic would come off the LTC at the A13 which only has eastbound access.  Along to the Orsett Cock junction, and then either up around roundabout, back westbound along the A13, and then down to the M25, or trying to cut through from the Stifford Clays, Grays, North Stifford Junction, any way it possibly can, through North Stifford, or the Treacle Mine roundabout and along through by Lakeside, down through Grays and along West Thurrock.  Or it might come off  at the Orsett Cock and take A128 to A127 to the M25. Or even try cutting through local roads like the old A13 (A1013), or actually through Orsett to head towards the M25, all the rat runs that we know people use way too often now when anything happens.

Traffic would come off the LTC at the A13 which is only eastbound, so again along to the Orsett Cock junction, up around roundabout, back westbound and then one of the options of cutting through to the M25 mentioned above.  Or if they decide they would rather turn around completely and head back northbound down the LTC, they would have to go eastbound along the A13 to the Stanford junction, up around the roundabout, back westbound along A13 to just under the Orsett Cock roundabout to the LTC junction.

Keep in mind that after an accident/incident traffic backs up another 1 mile every 90 secs.

When scrolling through the maps of these connections we noticed that the A1089 (north) slip road to LTC comes and goes, depending on which map you are viewing.  The maps in question feature about half way down the page on the HE website here – https://highwaysengland.citizenspace.com/ltc/75d4717b/ and pages 64,65,66 in the Consultation Guide. 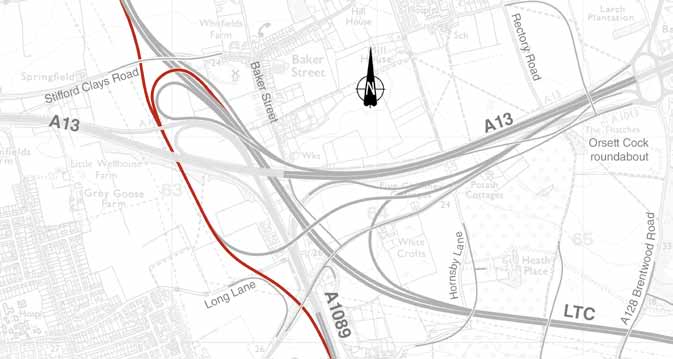 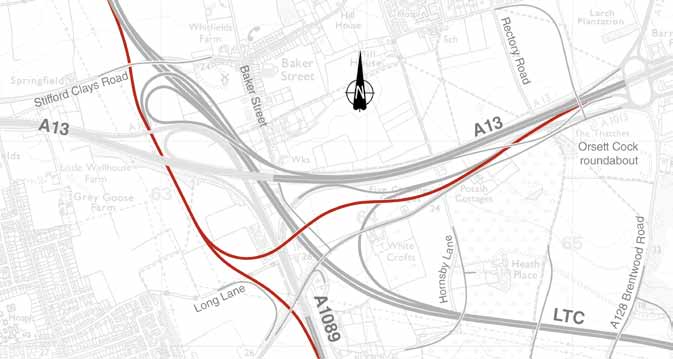 The red line, coming from the bottom of the image, is the slip road from the A1089 (north) connecting to the LTC.

But doesn’t show on these maps that highlight the other connections.

Be careful to watch out for other things that HE might be doing magic tricks with. Let us know what you find, or don’t find!!