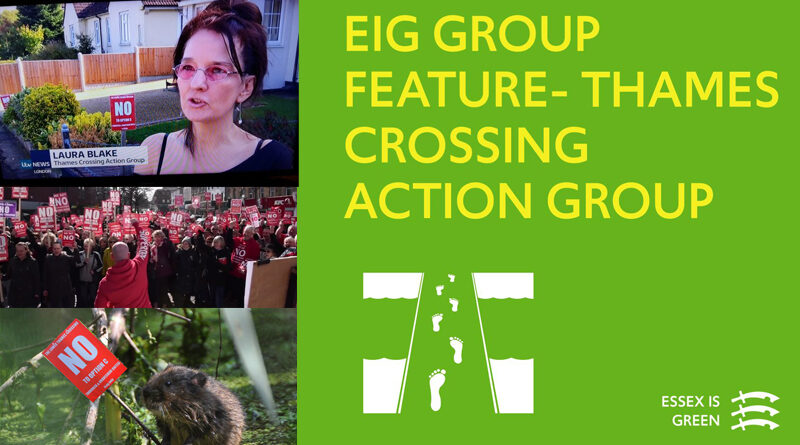 Thanks to Neel Mookherjee for asking TCAG Chair, Laura Blake to take part in a mini-feature for Essex Is Green Discussion Group which is a place to discuss all things ‘green’ in Essex as part of the wider project of The Essex Climate Action Commission.  The mini-feature was also shared on the Essex Is Green Changemakers group too.  Here’s a copy of the interview!

What inspired you to start your group?

It wasn’t actually me who started the Thames Crossing Action Group, over the years many different people have been involved in the group, and as we always say, together we are stronger! That said I have been actively campaigning against LTC since early 2013, and things just seemed to naturally progress over the years and now I am Chair of the group! The proposed Lower Thames Crossing would be a hugely destructive and harmful project if it goes ahead, and there are so many reasons to fight it, and it is a combination of those reasons that inspires us to keep fighting. The more you find out the worse it gets, and the more of a need there is to keep fighting.

What’s the ethos of your group? Was there a common cause that you felt you’d like to change?

We try to work on a two pronged approach, ultimately we want to try and stop the proposed LTC, but we also recognise that we need to try and get the best worst case scenario out of it, should the worst happen. We always say, the huge amount of destruction that the LTC would inflict would be bad enough if it actually solved the problems that everyone suffers with due to the Dartford Crossing, but the simple fact is that it won’t, and HE’s own data proves that. Highways England have attempted to divide and conquer when it comes to the different areas along and surrounding the proposed route, we have been doing our best to try and unite as many areas and people as possible, as we know that together we are stronger!

How does climate change and sustainability inform what you do with your group?

The proposed LTC would emit over 5 million tonnes of carbon emissions. It is terrible that we have to fight things like this. Carbon Net Zero has been enshrined into UK law, yet the UK roads policy doesn’t acknowledge this legal requirement. Our friends at Transport Action Network have had two legal challenges against the Government which we have and are supporting. The first is on climate grounds against the £27bn road building programme which includes the LTC. The judge recently found against them on this, but they are already appealing to the Court of Appeal. The second challenge was to get the Government to review the outdated roads policy, because as mentioned it doesn’t even take Carbon Net Zero into account. The Government recently agreed to review the roads policy. But they have refused to suspend the roads policy whilst it is reviewed, meaning all road projects can continue to be pushed through whilst the review takes place, which could take a couple of years. We would argue that if it is deemed necessary to review the policy then the road projects it governs should also be reviewed for the same reasons.
There are of course other aspects of the LTC which are of great concern on an environmental level. The route runs through greenbelt land, this is a 14.3 miles of new road, but also a much wider impact to land for the actual development boundary which is huge. We would lose woodlands (including ancient woodlands), hedgerows, water courses and ponds, solar farms, wildlife and habitats, agricultural land (including grade 1 listed), and so much more. The consequences of these impacts go on and on. For instance, think about all the extra food miles due to loss of agricultural land. Or the greatened risk of flooding.
There is plenty of evidence to show that building roads creates more traffic. More traffic means more congestion and pollution. Electric vehicles are not the panacea that many like to believe, and still emit PM2.5 (tiny particles of things like tyre wear, road wear, and brake dust which are small enough to get into the bloodstream and are very dangerous). EVs won’t solve the problem of congestion, and could in fact result in more traffic if people think of EVs as being green. More traffic, more congestion, leading to calls for more roads, more roads more destruction and loss, and so the circle goes on, unless enough of us step up and try to stop it.

What do you find the hardest thing in running your group and have you found a workable solution to this?

The hardest thing has to be trying to deal with the huge workload and stress that fighting a project of this scale brings. We are a group of residents, not qualified or trained experts, we have learnt what we know from lots of questions, research and a lot of time and effort. There are things that we know now that we never imaged we would ever need to know in our lifetime, but when needs must that’s what you have to do, step up and learn the stuff that you need to, especially with something as important as this. Nobody is prepared for the phone calls from suicidal people due to the stresses of LTC with homes losses etc. Nobody ever dreams they would need to learn about traffic modelling, engineering plans, policies and procedures like Development Consent Orders to the level we have had to learn.
Personally my way of dealing with stress is to spend time outdoors, whether it be in my garden or managing to get out for a walk along a footpath or in a woodland. But that too can have it’s added stresses when you are spending time in the areas that would be lost and impacted if the LTC goes ahead. We are very lucky in one way that we get invited to private ancient woodlands, which are magical places to spend time that most people don’t get to visit. But at the same time it is bitter sweet as these ancient woodlands are under threat and you know your visits are due to the fact that you are fighting to save them from destruction. 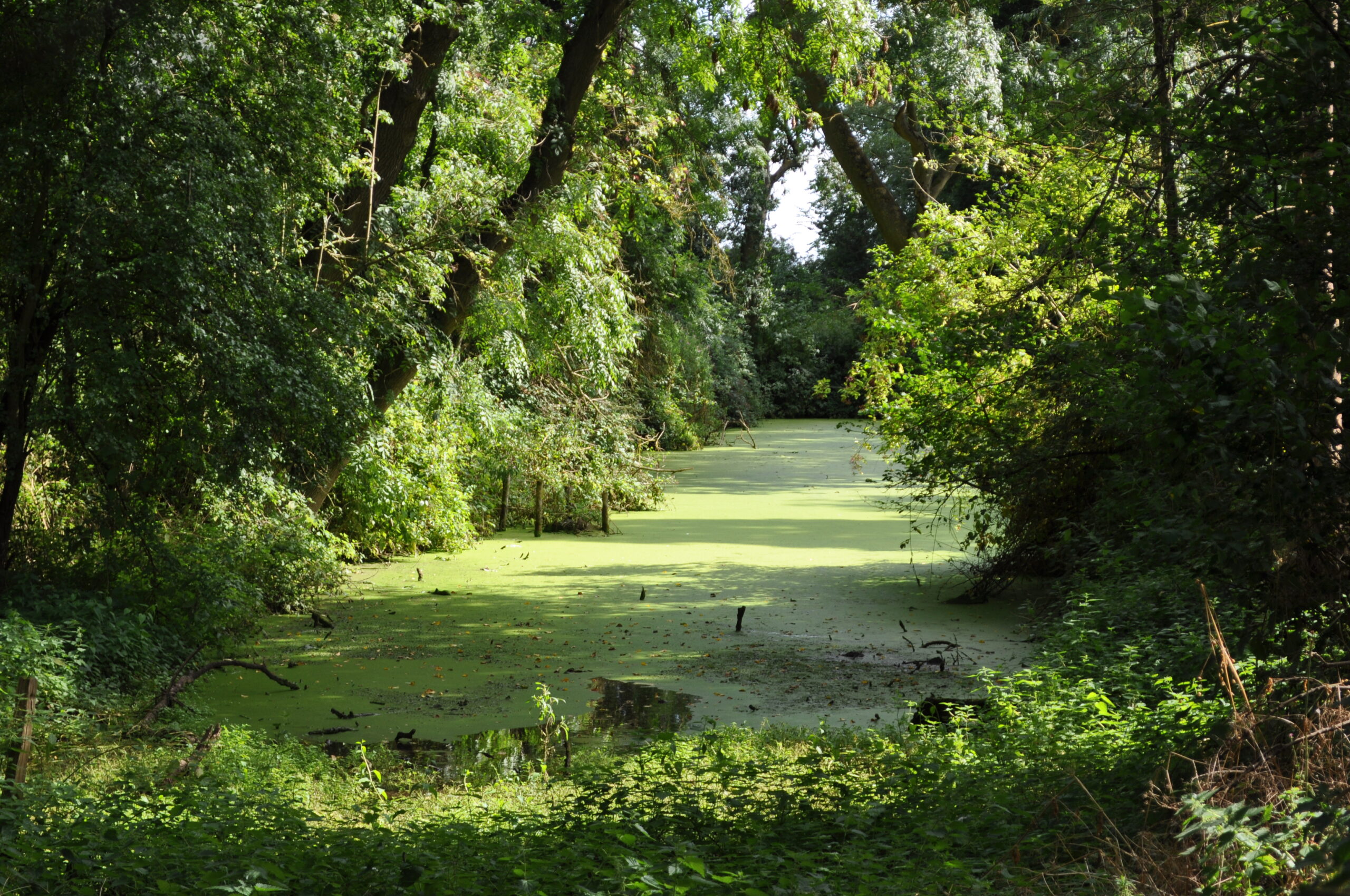 What do you get out of running the group personally and being a contributing member?

Ultimately we most definitely get to experience community, in a way like never before. Sharing info with others, exposing the truths about the LTC and helping people better understand and be able to have their say and join the fight against LTC. Knowing we are making a difference to people, and keeping the fight going.
Personally what I also get out of it is knowing that regardless of the outcome, and obviously I hope it goes in our favour, I and the rest of the group will have done everything we possibly can to try and stop this hugely destructive and harmful project. As the saying goes, “I don’t want to protect the environment, I want to live in a world where the environment doesn’t need protecting”. But sadly we’re not there yet, and as Dr Suess said “Unless someone like you cares a whole awful lot, nothing is going to get better, It’s not” So we all have to keep caring and fighting!

What’s been the biggest achievement of the group?

I think the fact we’ve managed to create such a strong group and keep fighting for so long. Over the years we’ve managed to get some unprecedented results, Thurrock Council set up the LTC Task Force with Highways England in attendance, which we have a committee seat on, something that was created as a direct result to our group taking action to try and get the council to open up communications with residents on the LTC. We also managed to delay HE’s LTC plans for years due to the sheer amount of consultation responses, and in part to our Inadequacies of Consultation evidence submitted to the Planning Inspectorate which saw HE withdraw the LTC Development Consent Order late last year, because if they hadn’t the Planning Inspectorate were due to refuse it! We are a community of people from all sorts of backgrounds in different areas that are all pulling together, because it is worth the fight, and together we are stronger!

Is there any advice you’d give to someone starting their own local environmental group?

Get as many people supporting you as you can. Help share info to better enable others to understand your reasons for fighting. Share things in ways that are as easy as possible for other to understand, and always do your best to share the evidence and reference points to back up what you are saying. Learn as much as you can on all associated aspects of what you are fighting for. Join forces with other likeminded groups and people and share info, it’s amazing how much stronger you can be when you all join together, sharing info and working together to help each other. Try to remember to take a little time to take care of yourself when you need to, fighting these things takes its toll on you, so be kind to yourself and get as many fixes of nature as you can to help recharge your energy!

Is there a funny story you can share around you running your group?

Just the other day TCAG Vice Chair Leigh was out chatting to some people in her neighbourhood about LTC and one gentleman interjected that the LTC was going ahead because the cottages around the corner had already been Compulsory Purchased. This was a good example of too many people lacking actual knowledge about these kind of projects, and just making assumptions rather than actually learning the facts. Because the cottages in question were actually where Leigh lives and none have been compulsory purchased!!! We don’t care how late to the party people are with learning the facts and joining the fight, we continue to expose the truths and get word out to as many people as possible.

What’s the best way for people to get involved and what practical ways can people help the campaign?

Obviously it’s always great to have more people aware of our cause and joining the fight. People can find out more on our website www.tcag.info and we always welcome people on our social media channels too Facebook and Twitter.
Right now we have another LTC consultation happening, which runs until 23:59 on Weds 8th of Sept. We really do need as many people as possible taking part and having their say. You don’t have to be local to LTC to take part, the consultation is open to everyone.
It is worth bearing in mind that it would not just be Kent, Thurrock/Essex, and Havering that would be impacted by the proposed LTC. A much wider area of the existing road network would be impacted by the fact the LTC doesn’t solve the problems that are suffered due to the Dartford Crossing. As well as the fact HE are not planning how traffic would migrate when there are incidents , and there would not be adequate connections. That would result in far reaching chaos, congestion and pollution. And ultimately on top of all that there is the environmental and climate impacts of the proposed LTC that of course are something we should all be having our say about!
We have published a step by step on our website for those that may appreciate a little extra help when responding https://www.thamescrossingactiongroup.com/community…/ We hope as many people as possible will have their say and encourage as many others to please have their say also. Together we are stronger!
Share
0
Tweet
0
Pin
0
Email
0