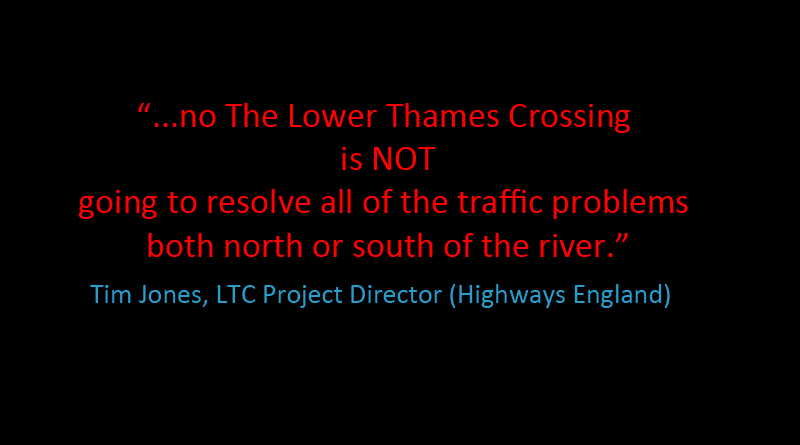 Many will be under the impression that the proposed Lower Thames Crossing is about solving the congestion issues we all suffer due to the Dartford Crossing.  It has become more and more apparent the more research you do into the proposed route that this simply is NOT the case.

Even Highways England, LTC Project Director admits it won’t solve the problems we are all suffering with north and south of the river. Listen:

This audio is from the March LTC Task Force Meeting

Councillor Tom Kelly – “In terms of the whole project we’ve had a very difficult month again with the Dartford Crossing and whilst the Dartford Crossing is separate to the new Lower Thames Crossing, I do think the two are connected, and really they should be a bypass to one another if the Dartford Crossing had a nightmare again, which it did this month.  Residents and people using the M25 and this new crossing should have an alternative route to be able to get away from the congestion that they find themselves in, 3- 4  hours of traffic.  At the moment I am concerned by the Highways England numbers, the new Lower Thames Crossing is supposed to siphon off around about 15% of the existing traffic, that would leave roughly to my calculations and my research 130,000 vehicles each day that still don’t want to use the new Lower Thames Crossing, they want to get round the M 25 as they are now.  The problem with that is I don’t think it solves the problems with the congestion at the moment.  I think there’s lack of investment on the Kent side, I think if any of the traffic that manages to escape the congestion on the M25 and Dartford Crossing at the moment, it will go directly back on to the A2.  The A2 is not currently designed to deal with 130,000 vehicles.

I saw a comment on the Thurrock Gazette website today about the visual presentation that is about to be shown, and one of the responses was “Just get on and build it” and I appreciate that everyone’s got an opinion, but I think, that they think, that when this crossing’s built that it is going to solve the problems at Dartford, and I don’t think it is, and I think we are still going to be facing these problems, so I’d like probably a little bit more ambition, I’d like the numbers to be rechecked and I’d like the justification, particularly £6million pounds worth of investment and how that’s going to help us here in Thurrock in terms of the current issues at Dartford.  I don’t expect to have the answers now but would like to see that added to the Action List would be helpful.  Thank you.”

Councillor Peter Smith (Task Force Chair) asked Highways England, Lower Thames Crossing Project Director Tim Jones if he would like to respond to that, this was his response:

Tim Jones – “I understand the challenge and clearly the whole network, the UK network, is under pressure it’s not just Dartford, but clearly Dartford has got it’s own issues. We have made recommendations to officers to hold a traffic summit and we will be doing that hopefully in the Spring where we bring all operational issues together so I am aware that project issues sometimes  dominate the agenda, but if we can have a discussion about how best to get the most out of the network particularly in times of emergencies or breakdowns or accidents then we should do that particularly round Junction 30/31, 1A, 1B.  There is some investment going up and down the corridor, the Dartford corridor. There are studies being looked at so it’s not in my remit but I am very happy to actually make sure that the activities are co-ordinated and communicated.  So the traffic summit we’ve offered and hopefully will be getting going as I said hopefully in the Spring almost certainly after your elections.  As far as the business case is concerned I am very happy to have a further discussion either privately or in the Task Force about the business case.  It is quite complex cos it involves the traffic model, it talks about how the traffic works and where the demand is coming from.  What I would say is that once you do open up new crossings and new routes then you get pent up demand and pent up demand is very difficult to actually forecast now because people see it as a change of lifestyle and businesses come/businesses will change, and sometimes that is very difficult to predict.  So by all means we will talk through what the Lower Thames Crossing does in terms of shifting Dartford but you’ve still got to do a lot of work with Dartford, you’ve still got to do work with the A2,still work on the M25 and you can see that by some of the schemes that Highways England are promoting now or we have already got schemes that are on the drawing board on the A2, we’ve already got schemes at Junction 28 and that will be a continuum for Highways England by the way it is actually set up.  So it is a longer journey I’m afraid but No the Lower Thames Crossing is not going to resolve all of the traffic problems both north or south of the river.”

If you wish to listen to the meeting in full audio can be found on the Thurrock Council website.  (The segment quoted above starts around 15 mins 20 secs in to the recording)