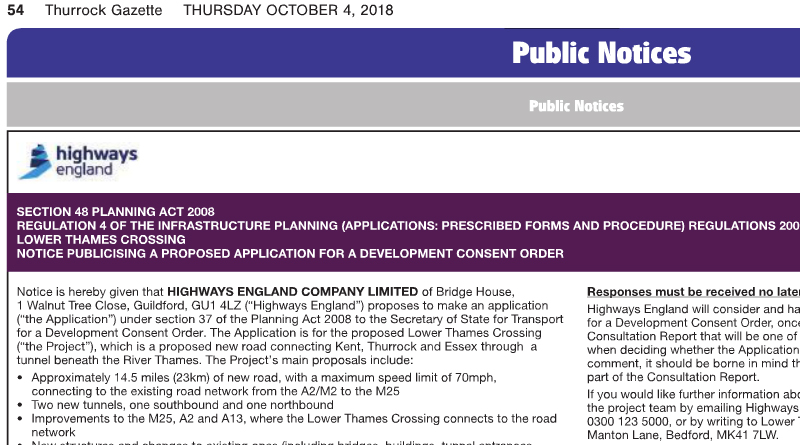 Today, Highways England have announced that the Statutory Consultation for the proposed Lower Thames Crossing will start on Wednesday 10th October 2018 and run for a period of 10 weeks, meaning it will end on Thursday 20th Dec 2018.

We still don’t know what Highways England will be consulting on, as they have declined to comment every time we have asked them, so we will have to wait until Consultation launches on the 10th to find out.

We do expect that their consultation form will be created in a way to try and get the responses they want.  Please be aware that we are entitled to also respond with separate letters with our own free comments.

We are also very aware that there are still many unanswered questions that we all have for Highways England regarding LTC that they have avoided and delayed answering.  We would advise writing to HE with individual questions that you may have, stating that you are unable to respond adequately to the consultation without the answer to your question.

We have been told they will be responding in a timely manner to any questions.  However, if it gets towards the end of the consultation period and you still haven’t had an answer please make sure it doesn’t stop you taking part.  State in your consultation response/letter that you have not received the answer to your question, stating the question, so you have been unable to respond adequately due to Highways England’s failure to answer your question.

It is very important to point out that any letter responses need to be individual, since in the 2016 consultation they grouped 13,000 responses as 1 since they considered them an organised response since the letters all included a standard response with space for personal comments.  Please ensure any letters this time cannot be treated in the same way, by ensuring they are individual original letters.

Highways England have advised us at a meeting with Stephen Metcalfe MP, they are writing to ‘pretty much’ every household in Thurrock.  It will be interesting to see if they do, after their lack of communication in the 2016 consultation.  Please keep us posted!

A full list of Highways England’s Public Information Events for the Statutory Consultation can be found – https://www.thamescrossingactiongroup.com/highways-england-statutory-consultation-public-information-events/ 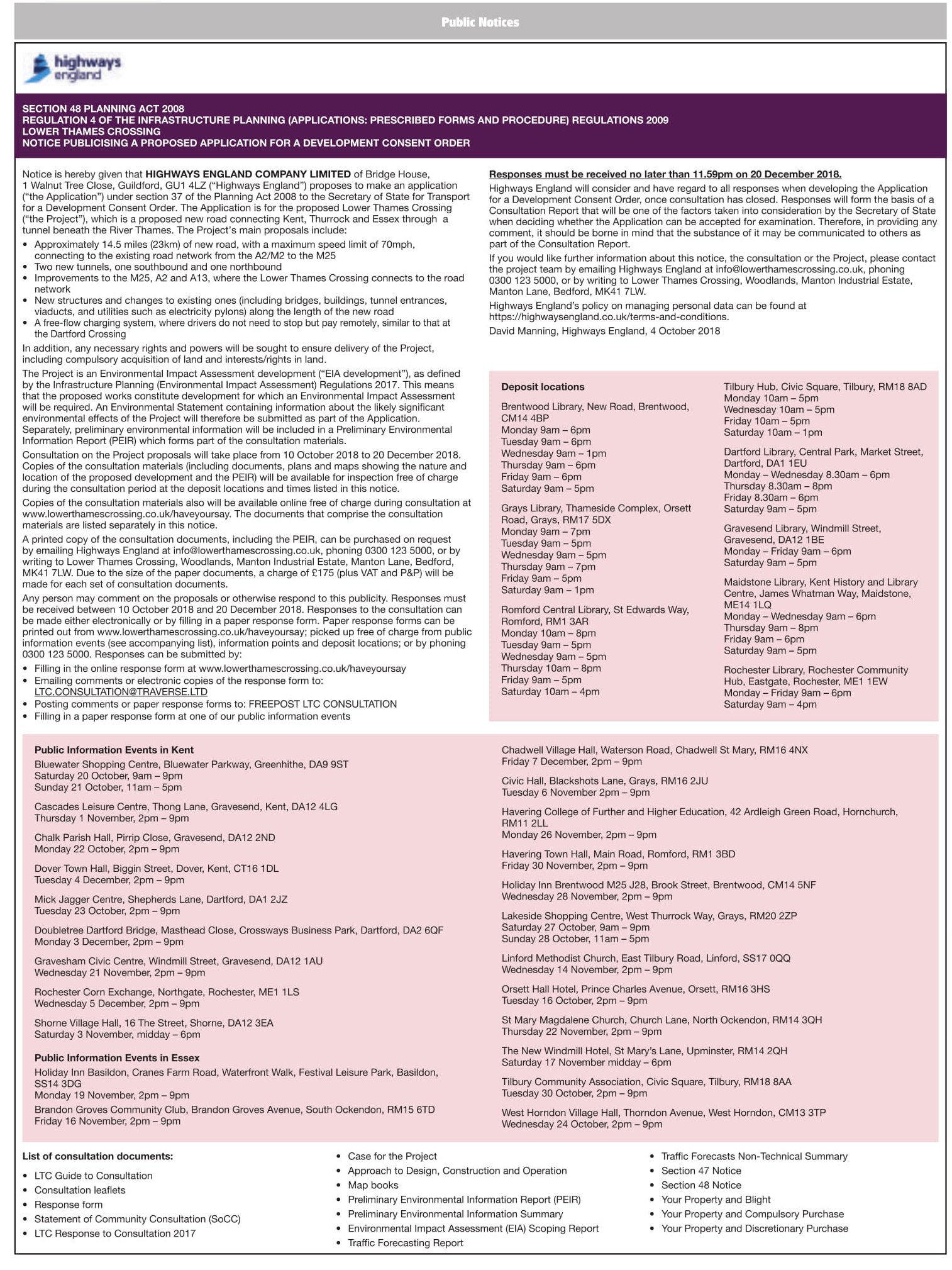 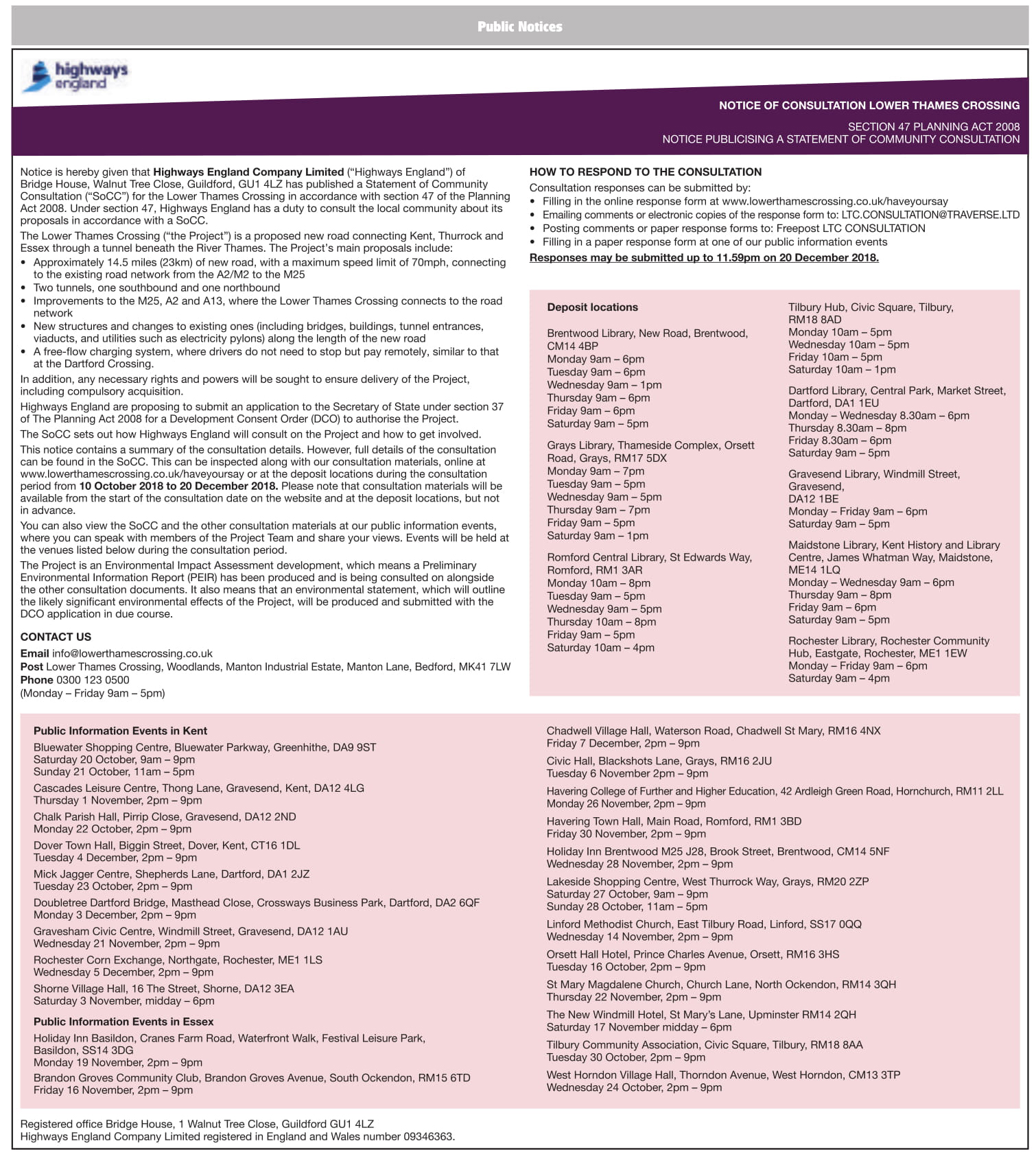