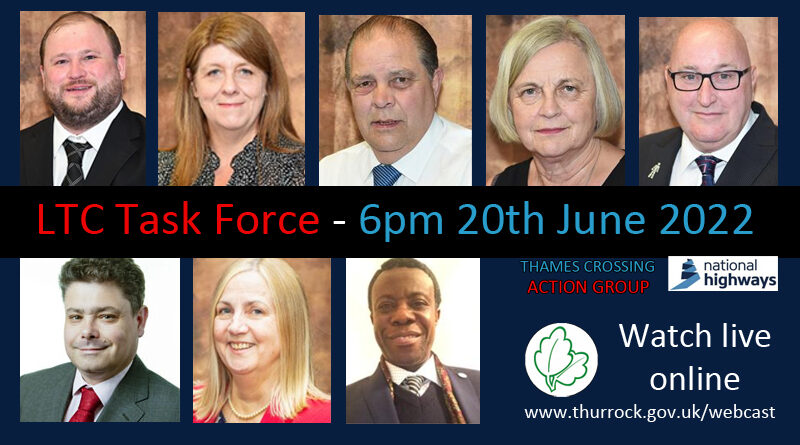 The meeting was live webcast and you can watch the recording on the council’s YouTube channel (we’ve embedded a copy below), and our update covers some of the highlights.

This meeting was the first of the new council year, we are pleased to announce that members voted in Councillor Fraser Massey as Chair, and Councillor John Kent as Vice Chair for another year.

The line-up for the LTC Task Force committee for the council year 2022-23 is:

There was an item of urgent business included in the meeting. This was to allow discussion on Thurrock Council’s recent letter to the government’s Treasury.

The letter from Thurrock Council’s Leader, Rob Gledhill is addressed to The Rt. Hon Simon Clarke MP, Chief Secretary to the Treasury.

In the letter, Cllr Gledhill states that there is “substantial and growing evidence to suggest that the current scheme is at risk as it will fail to provide value for money”. He highlighted that with all the changes that have taken place, there is a need to review alternatives to the scheme.

The letter concludes that “The scheme cannot therefore be justified in economic or environmental terms”.

Laura thanked the council and those involved in preparing and sending this great letter.  We wait to see what happens next!

Members were given a brief update from officers on the content we can expect in the council’s official response.

Local Authorities have been granted a slight extension to respond to the consultation by National Highways.  This is to allow for the fact that some are reforming after elections, and also to allow time for responses to pass official governance that has to happen within Local Authorities.

Thurrock Council’s response will be put before the full council on Weds 29th June 2022.  At the time of writing this update the agenda for the meeting, which will include a copy of the response, has not yet been published.  We will update again in due course once the response becomes available.