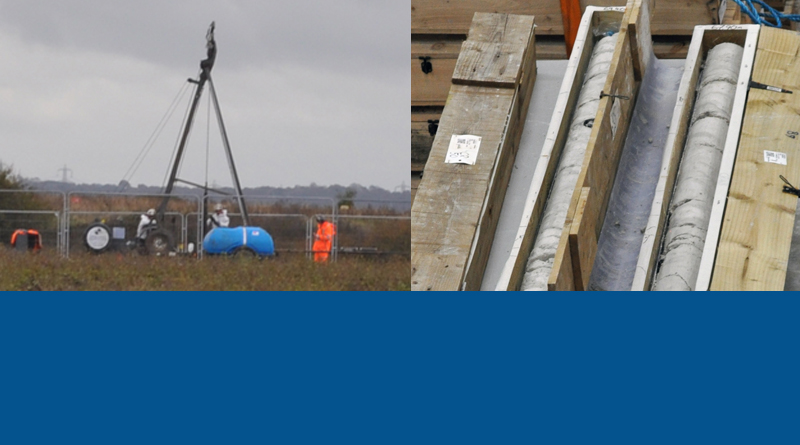 Highways England agreed to a couple of our admin team members going along for a couple of Ground Investigation site visits recently.

On Friday 22nd December 2019 Laura and Leigh attended a Ground Investigation site visit to view some of the works being carried out in the East Tilbury area.  We arrived at the HE compound which is down amongst the works for the new Tilbury 2 (port) expansion. It is worth noting here that the size of the works for Tilbury 2 are extremely large, and that there are also other works such as the removal of ash from land near the old Power Station, so these other works should not be confused with the Ground Investigation (GI) works that are being carried out for the proposed Lower Thames Crossing.

After a safety induction and getting our PPE (high viz gear, safety boots etc) on we were taken in an HE vehicle to the Ground Investigation site visit in East Tilbury.  Due to health and safety there was plenty of checking in and out on various parts of site, and we were asked to stay in the vehicle on site.  Probably just as well because as well as the other vehicles and equipment it was extremely wet and muddy.  We did ask which large puddle the tunnel portals would be coming up in if LTC goes ahead! 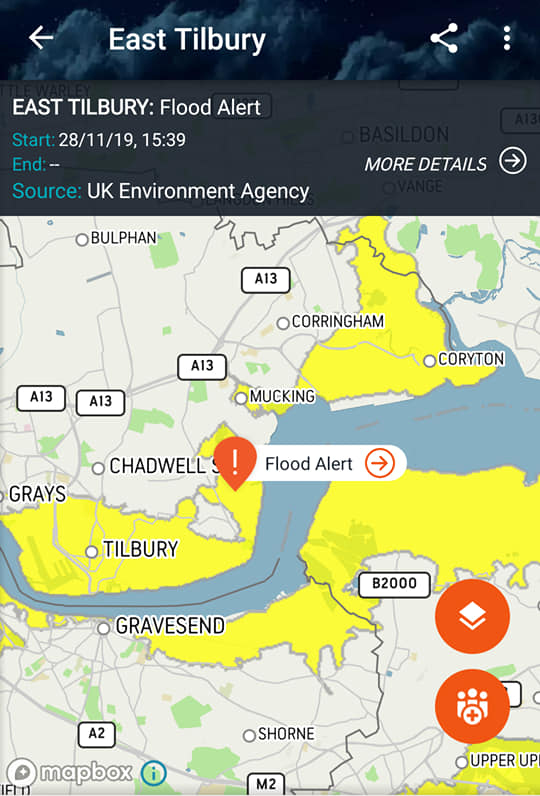 On the topic of flooding, the UK Environment Agency issued a Flood Alert for the 28th of November which is clearly seen as covering the area where we visited for the Ground Investigation site visit, and also where the proposed Lower Thames Crossing tunnel portals would be placed. (image to the right)

We sent a copy of this Flood Alert to Highways England asking them how the proposed Lower Thames Crossing will cope with being in a flood plain, especially in light of Flood Alerts like this.

HE’s response was:
“We are obliged to complete a Flood Risk Assessment in line with the various planning frameworks and requirements that govern schemes of this nature. The findings from this assessment will be submitted as part of our Development Consent Order application.”

Where they are carrying out these GI works they lay some temporary plastic tracks down to drive over. This was heading south down towards the river in East Tilbury. Again the surface water clearly visible! 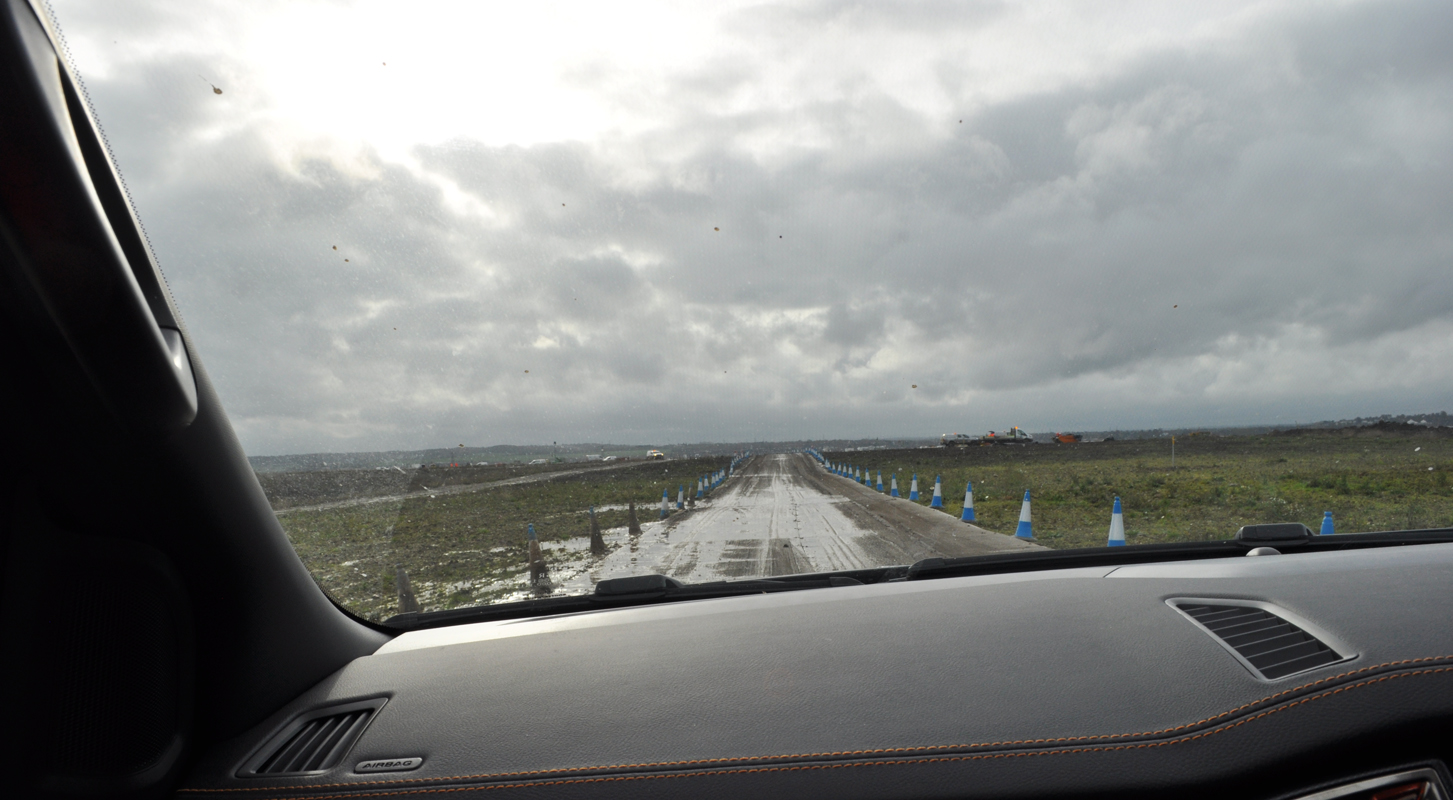 There were various areas where staff were carrying out various GI works. 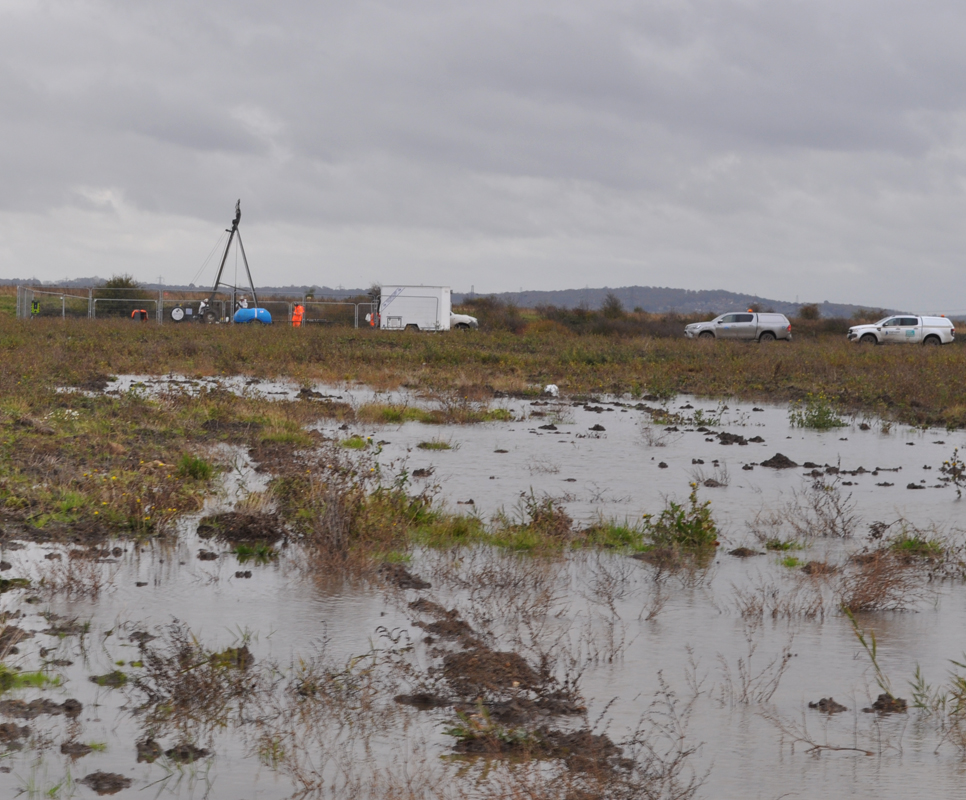 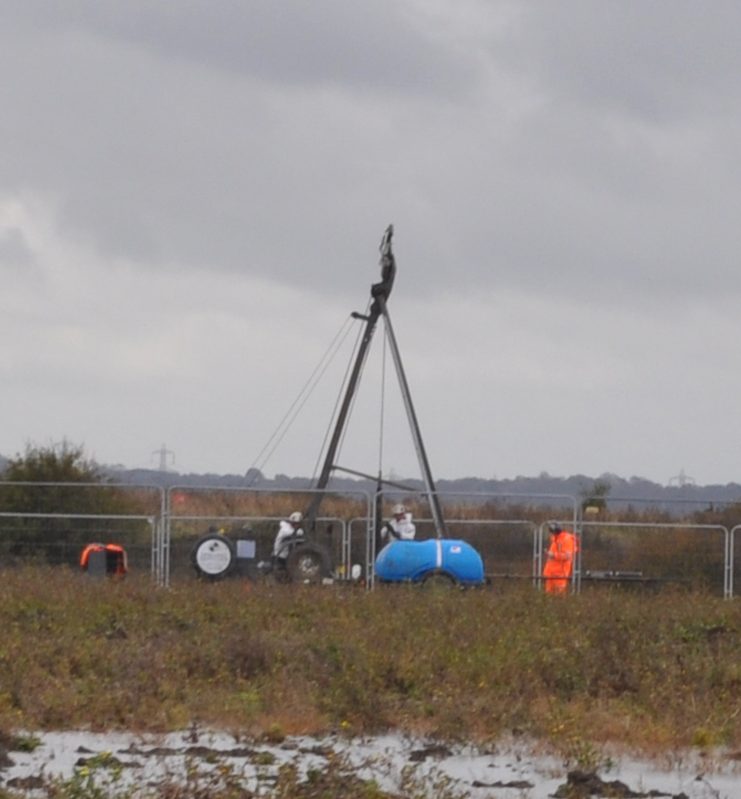 When they are using a lot of the equipment it needs to be lubricated with water, so they have large mobile tanks of water, like this, in the works compound to use for that purpose.  They also have similar dirty water tanks to store all the captured water that is released during processes to avoid releasing it onto the land they are working. 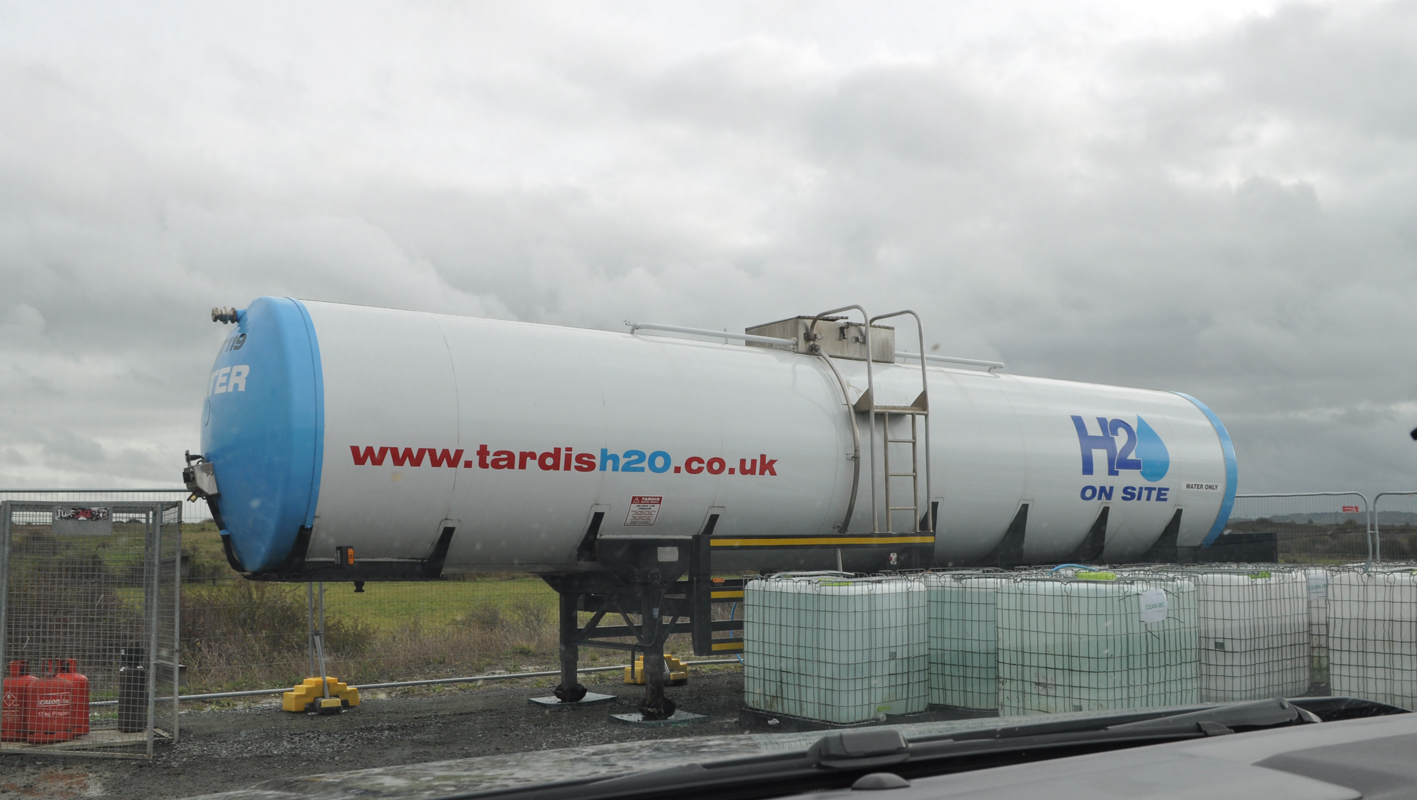 As well as on the land they are of course also doing GI works in the river.  The proceedures are the same in the river as on the land, other than they have rigs to work from on the river, like this.  I have brightened the image on the zoomed in image to try and give the rig a bit more detail/definition as it was a very over cast day when we visited.

They have proceedures in place before they start GI works to test below the ground/water for anything they will need to be aware of, such as unexploded bombs on land and under the water!

As you can see there are the four legs of the rig and then an access section in the middle.  There is a hole in the middle part for them to lower the equipment down into the river and into the ground below.  This is all done in a way that the section of river is contained within the core drills, so there is no leakage of samples into the river, and that the river water doesn’t disturb or affect the sample. 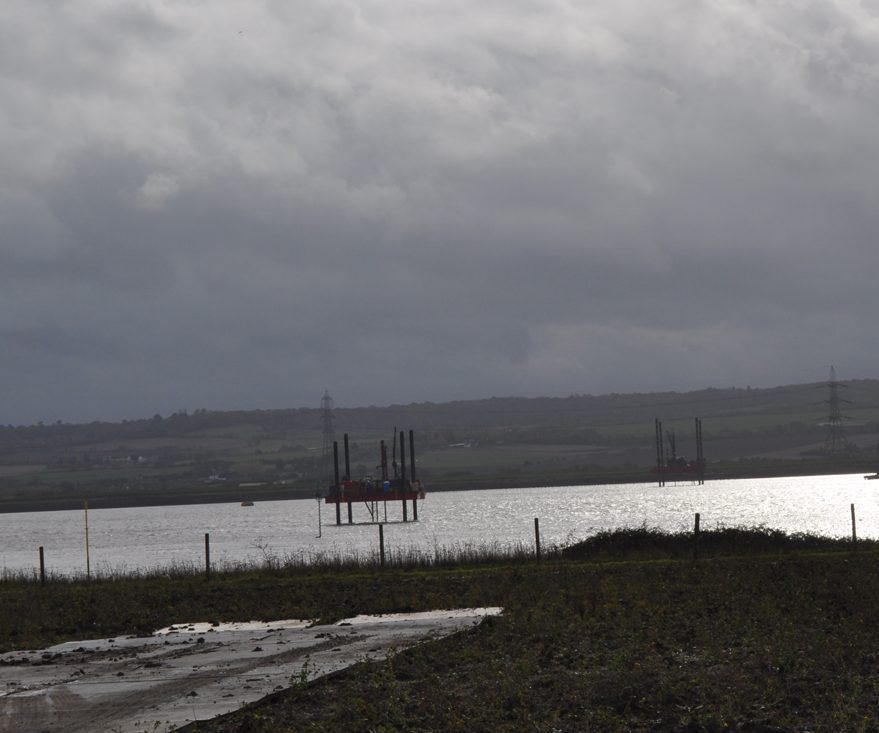 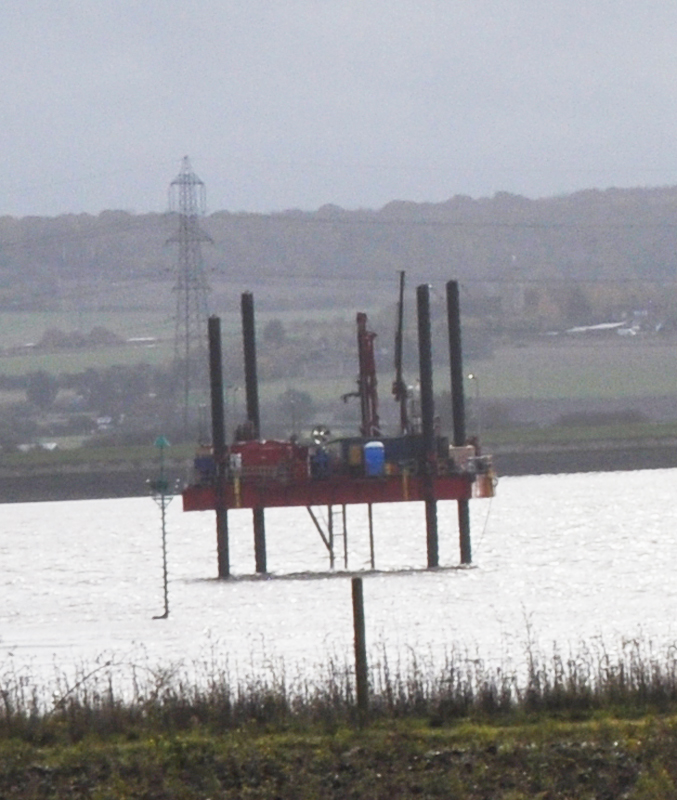 Here are some more photos taken on the way back up heading North.  As well as human patrols taking place on GI sites there is also dalek like security technology on the GI sites that monitor and film what is going on. 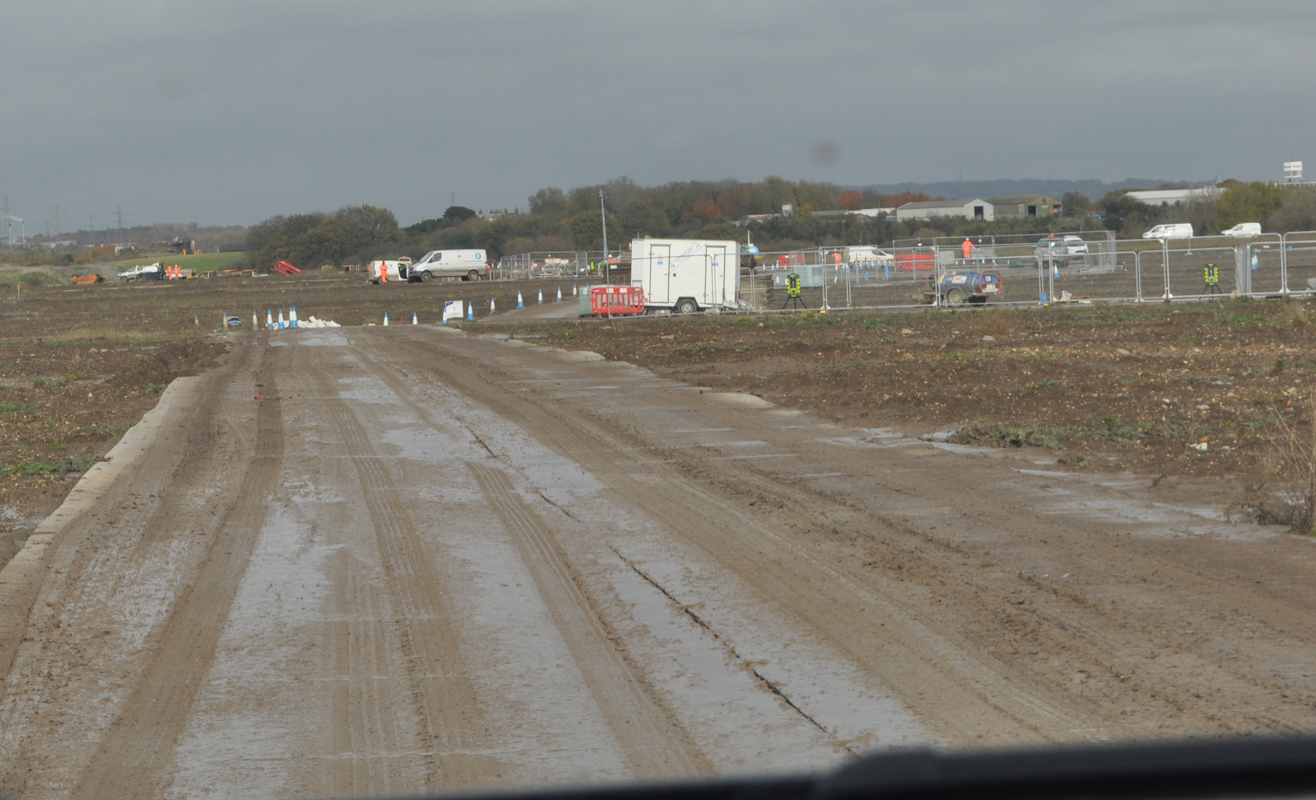 Note the three blocks of flats to the right on the horizon in the photo below, these are the flats in Chadwell St Mary. 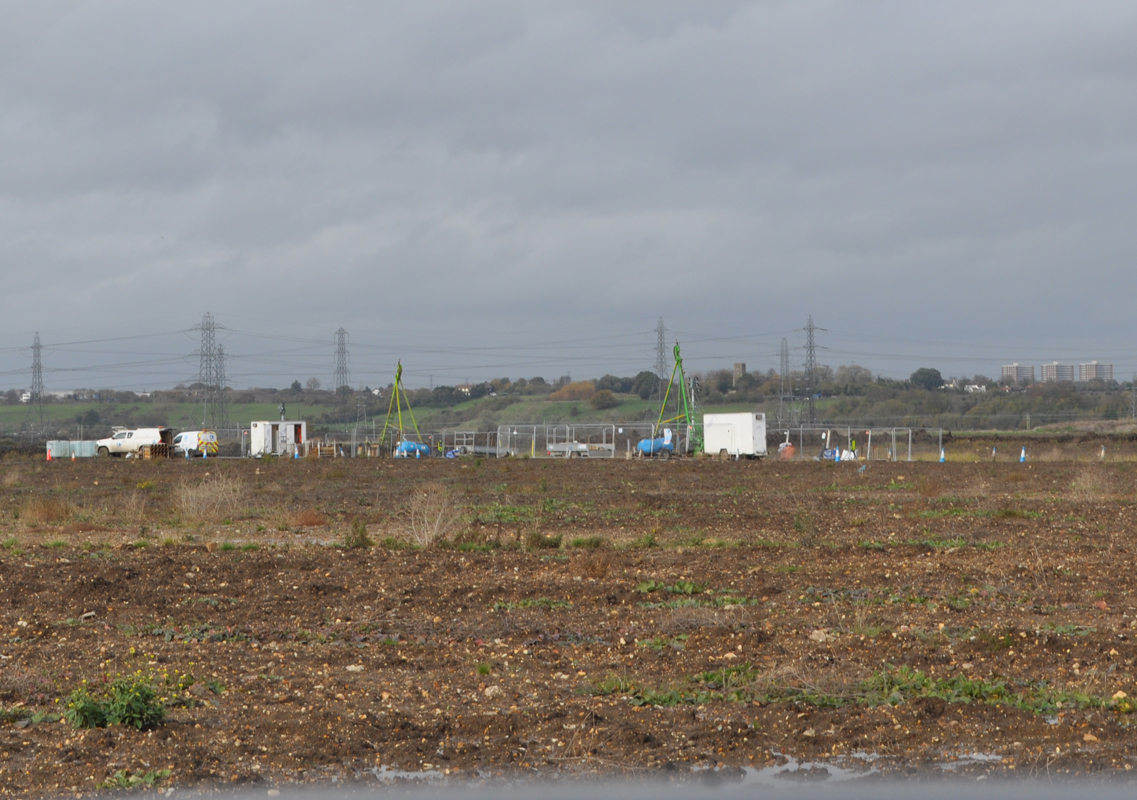 Yet more evidence of this being a flood plain… 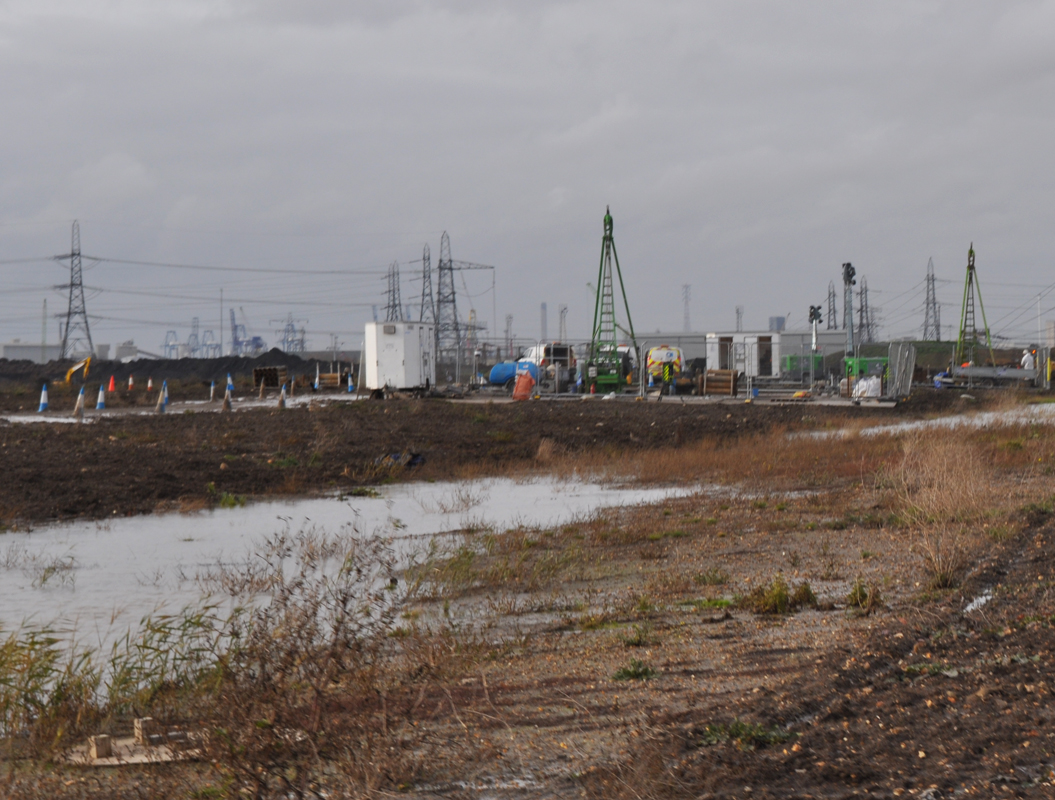 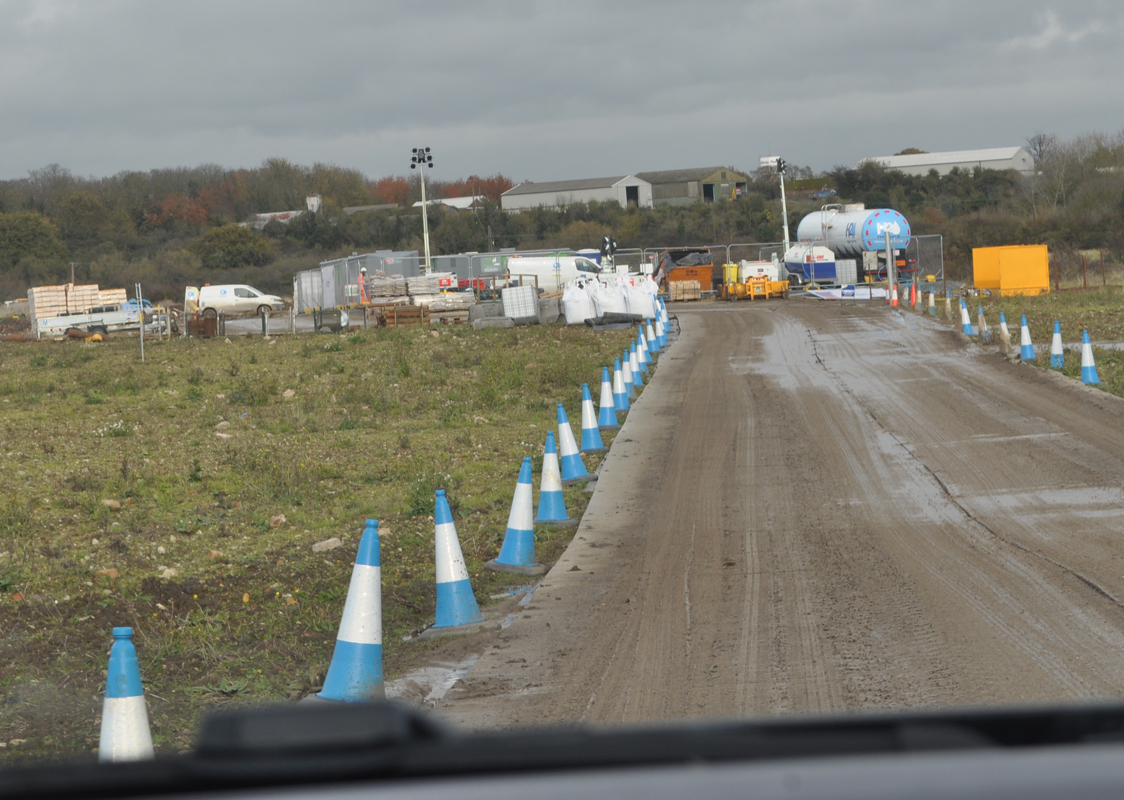 One of the reasons we really wanted to go along for a Ground Investigation site visit was because of the serious concerns everyone has about the historic landfill sites that the proposed route would pass through, and how the GI works would be carried out safely.

We have been viewing the historic landfill on the Queen Mary University of London’s website – www.qmul.ac.uk/geog/research/research-projects/historiclandfill/maps/. They have recently made some changes to the map, and have reduced the info available.  However, we had already taken screen shots of the info for reference!

The two main historic landfill sites in the East Tilbury area that are of interest in relation to LTC are the ones shown in red and dark orange on this map below.

The dark orange area is known as East Tilbury landfill site.  It has been listed with a first input date as <null> (meaning there is no date on record), and a last input date of 31/12/1958. 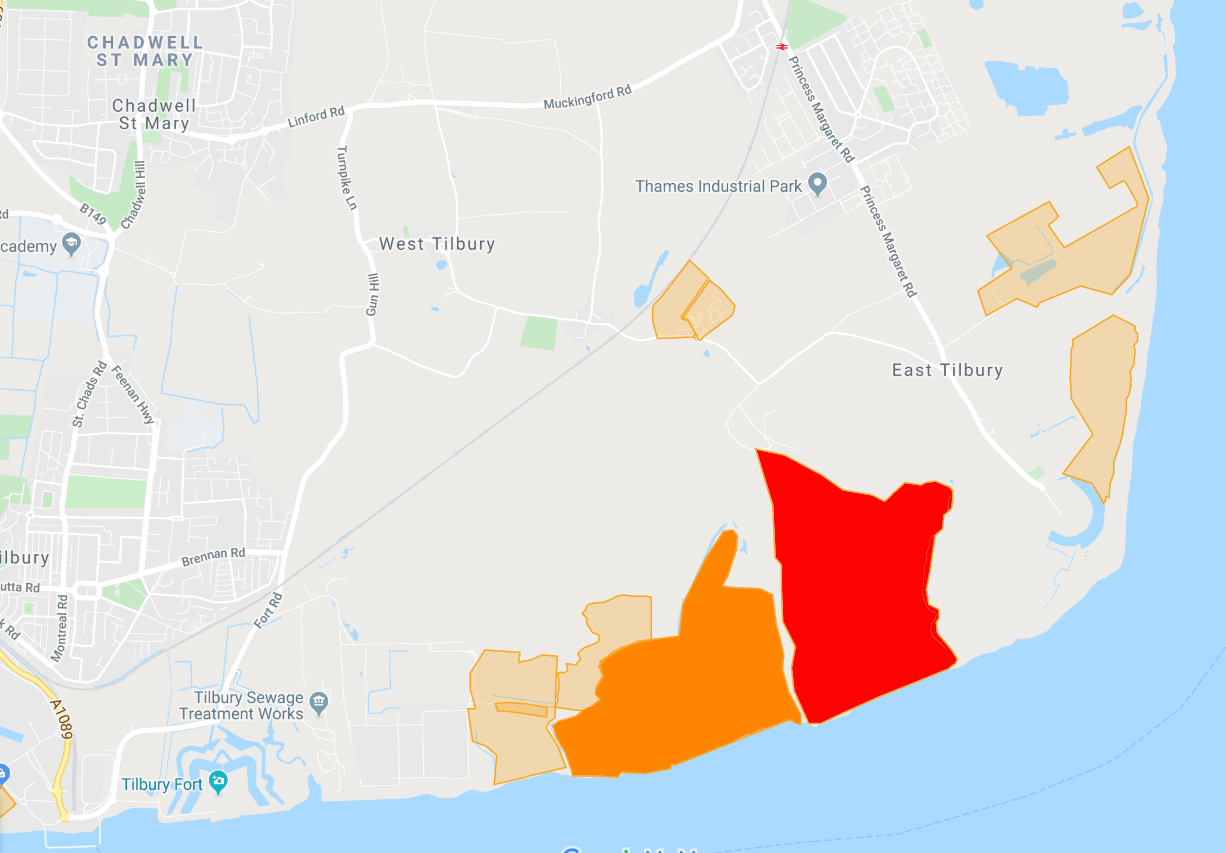 During our site visits we have asked HE if they could provide us with a map showing the historic landfill sites, with the GI sites/LTC route overlaid.  They have said whilst they have the neccessary maps for their own needs, an overlaid map such as the one we were requesting was not available to the public, and have suggested we create our own overlaid maps. We have pointed out that their maps, as always are not the best quality, and that they don’t overlay well on the historic landfill maps, so we have alerted them to the fact it will not look good for them!  Here’s what we’ve managed, as best we can!

Blue dots represent the GI site locations, the red area the historic landfill site that HE say they are avoiding. 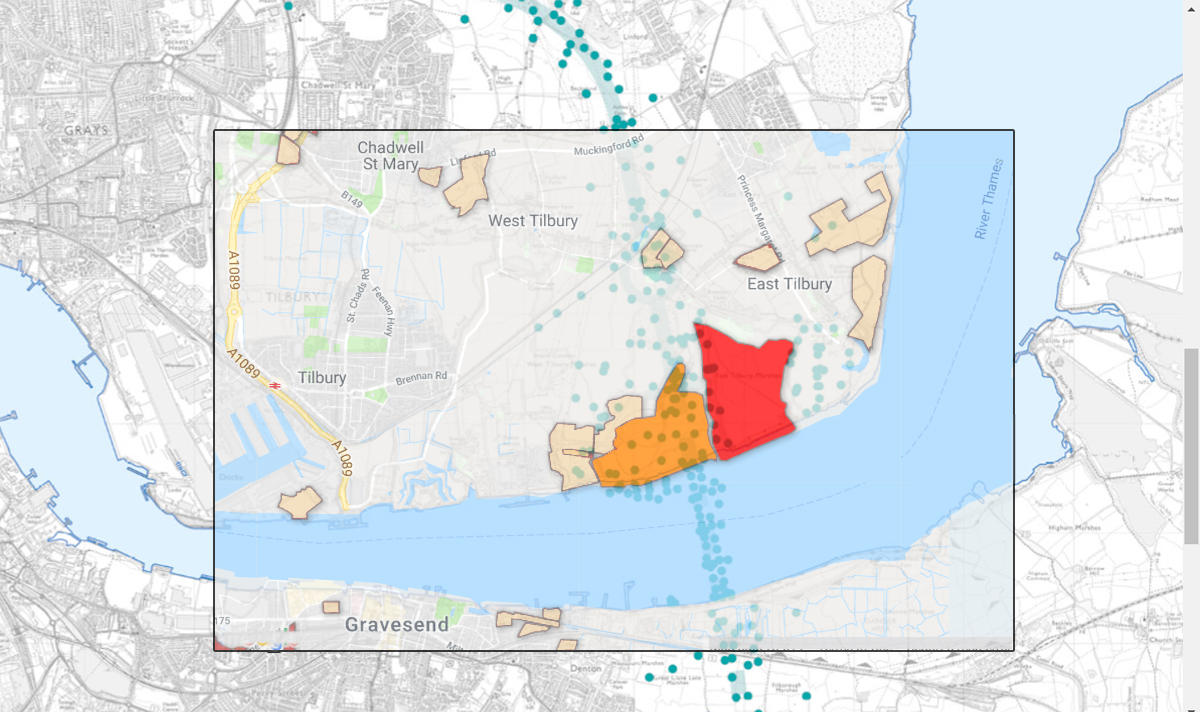 How do they perform the Core Drilling?

We found out that when they core drill to remove the core samples they use various site barrels/tubes.  There will be one that is larger diameter that rotates and drills on the outside of the barrel/tube. Then there will be a smaller diameter one that fits inside that one which doesn’t rotate, and the core sample collects in this inner barrel/tube as the outer one is drilling down.  The inner none-rotating barrel/tube contains a removable tube/liner, which is the plastic liner that you see in the photos below of the Core Store facility.  All these barrels/tubes are rigged up in a way to enable the sample to be recovered and brought to the surface.  As the core sample is being brought to the surface Bentonite Clay is poured down to plug the hole that the sample is leaving.  The core sample, in it’s liner, is then placed and stored in a core box and taken to the Core Store facility.  This is how HE explained to us how they take the core samples, especially from the historic landfill sites, without risking releasing anything nasty.

Thursday 12th December was the second of the site visits in connection to the Ground Investigation works.  Cllr Fraser Massey (East Tilbury) had contacted us when he heard about our first GI site visit and asked if he could join us.  Unfortunately we were limited to two people for the site visits, so this was not possible for the first part of the visit.  However,  as Leigh was not available to attend for the second part we invited Cllr Massey to join Laura for the visit to the Core Store facility in West Thurrock.

The Core Store facility is where the core samples that are taken from various locations along the proposed route (both north and south of the river) are stored, photographed and analyzed.  We had a brief safety induction for the site, and some time to discuss GI works with some HE staff in a meeting room, before being taken into the main facility.

There were different areas within the facility, which is a huge warehouse.  The main area is where they are working on samples in the core boxes that have come in from various sites. 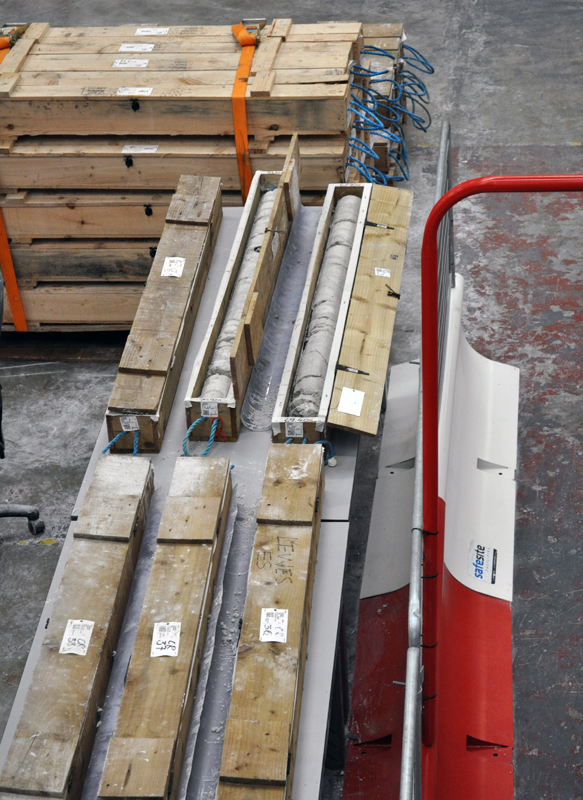 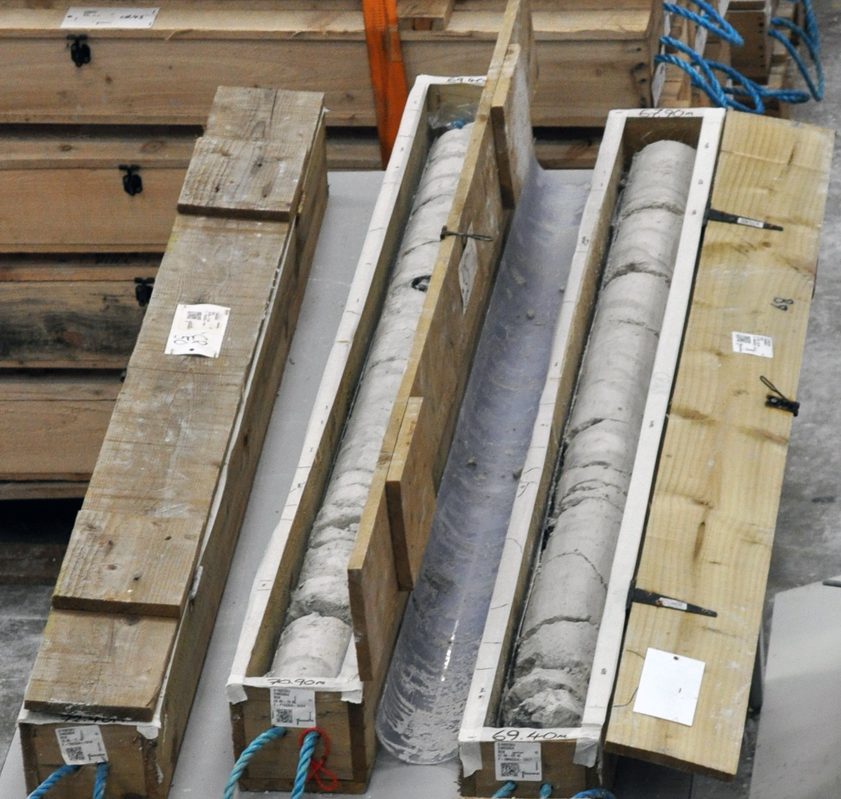 You can see there is a lot of chalk in the areas they are carrying out the Ground Investigation works. The plastic casing alongside the boxes are the tubes/liners that are used to encase the core samples during the core drilling process 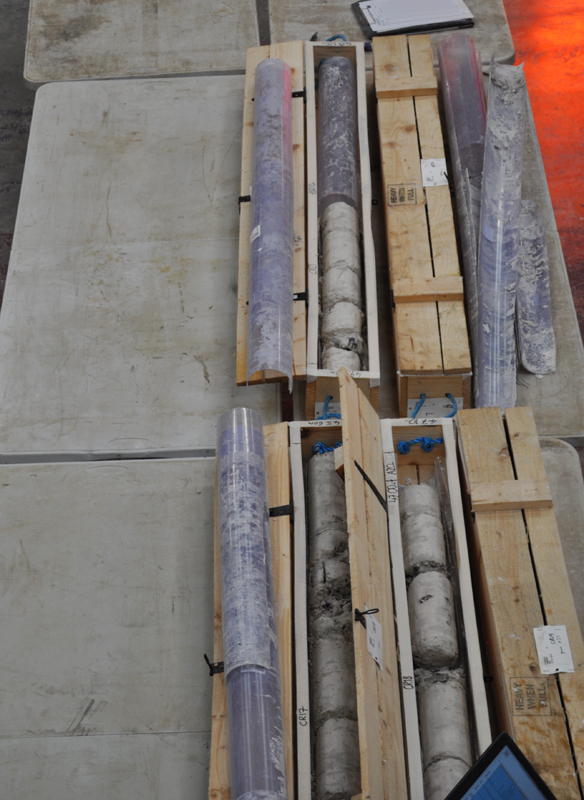 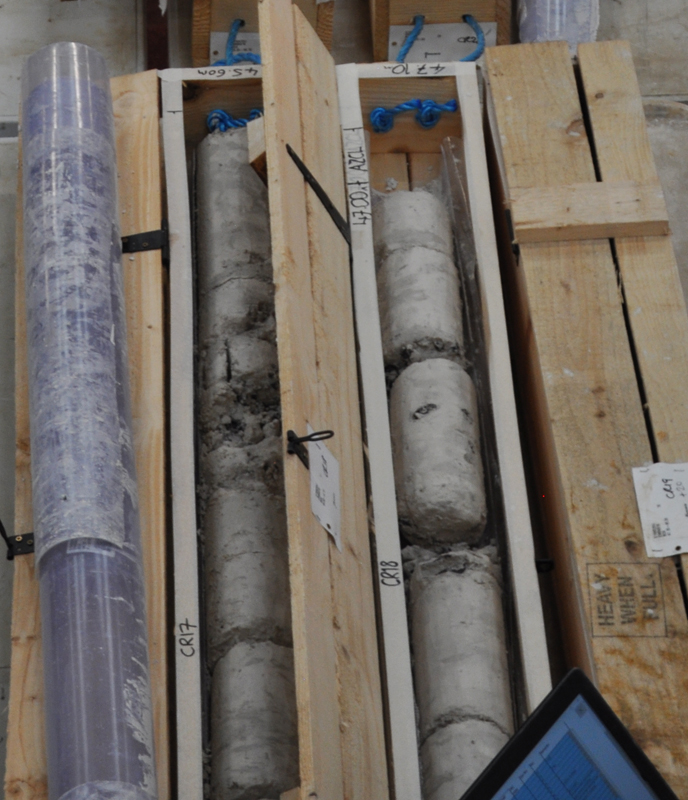 Some of the samples are kept in fridges, so that they can be kept at a similar temperature as they would be in the ground. 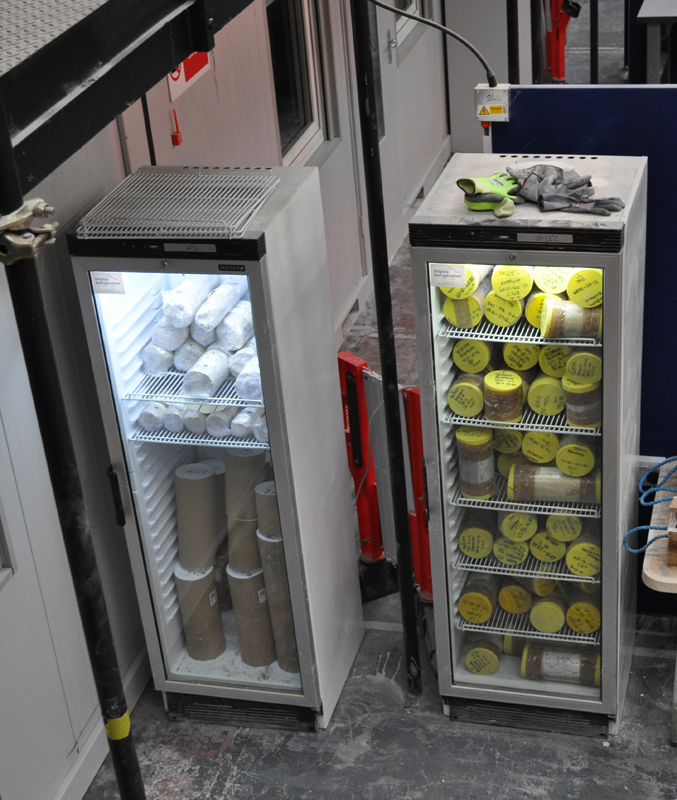 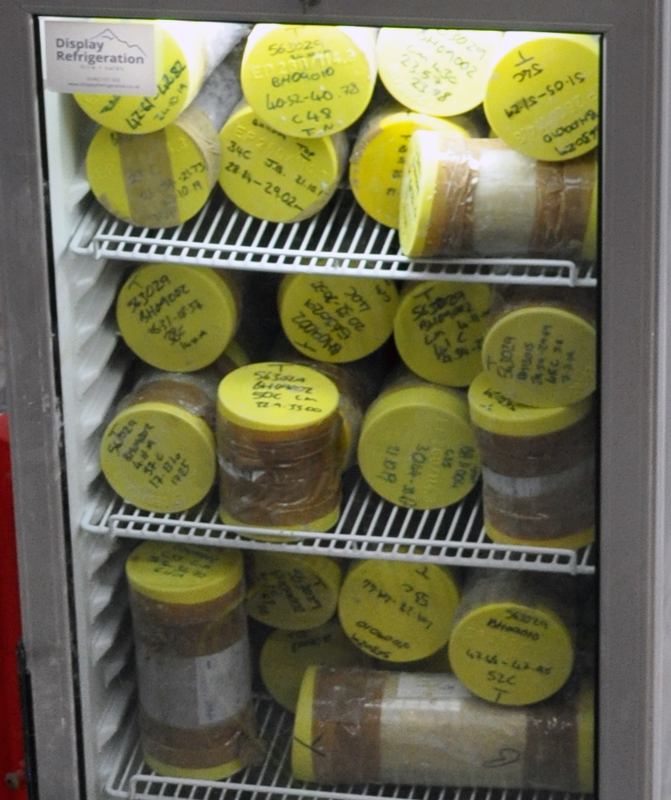 Another area has floor to ceiling racking where the samples are stored after they have been analyzed. 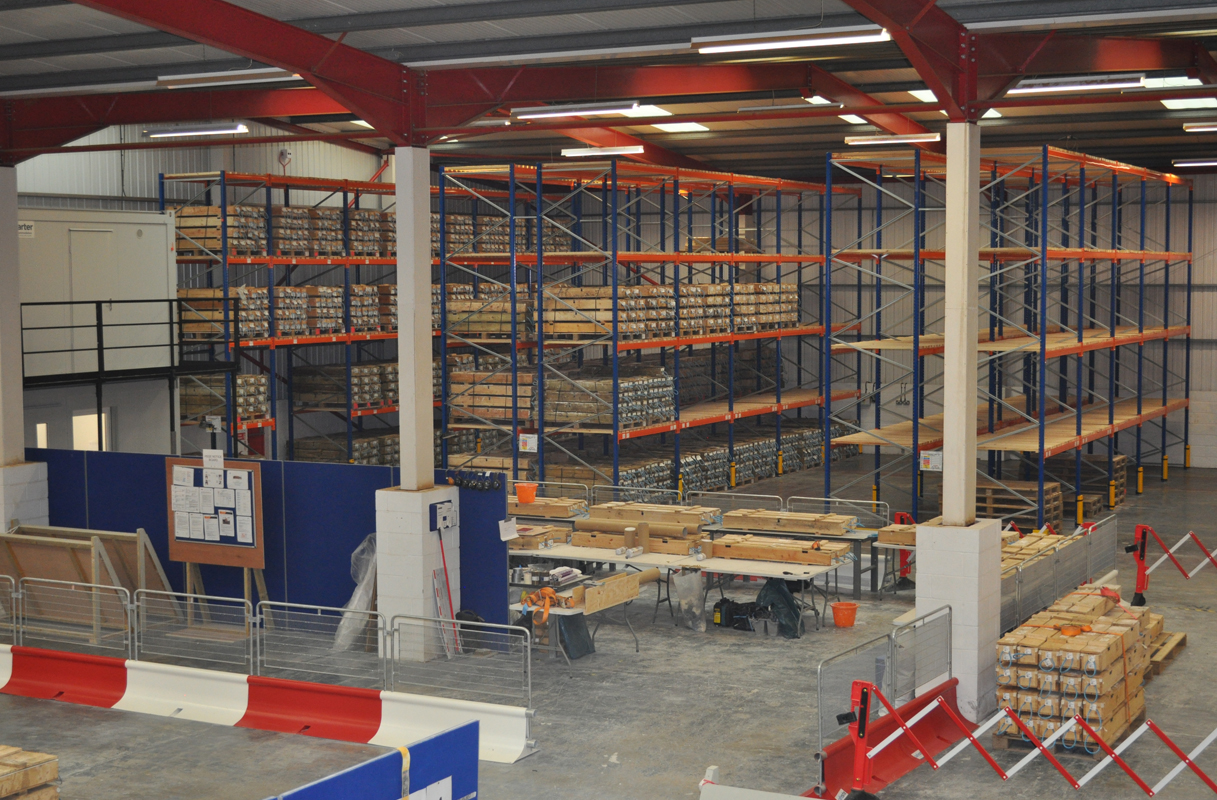 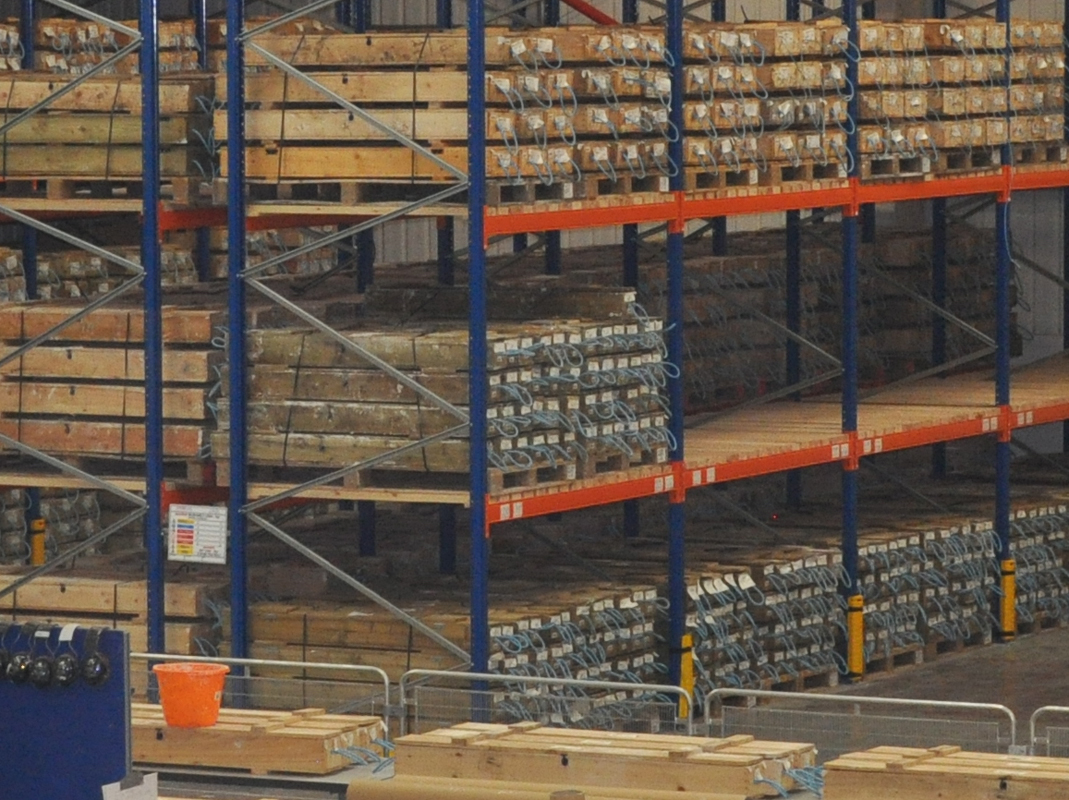 As always we stress that these are Ground Investigation works, and NOT the start of construction.  Highways England have not even submitted their Development Consent Order (DCO) which they currently anticipate submitting mid 2020.  Until they are granted a DCO they CANNOT legally start any construction of the proposed Lower Thames Crossing. These GI works are purely for the to investigate the types of soil and rocks, and water levels etc so they can take these things into account for the design and DCO application.

More info on the Ground Investigations