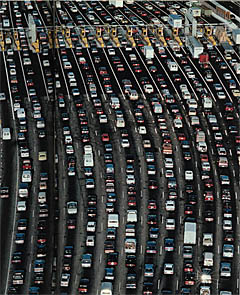 Braess’ paradox is a proposed explanation for why a seeming improvement to a road network can impede traffic through it. It was exposed in 1968 by mathematician Dietrich Braess who noticed that adding a road to a congested road traffic network could increase overall journey time and has been used to explain instances of improved traffic flow when existing major roads are closed. The paradox may have analogues in electrical power grids and biological systems. It has been suggested that, in theory, the improvement of a malfunctioning network could be accomplished by removing certain parts of it.

“For each point of a road network, let there be given the number of cars starting from it, and the destination of the cars. Under these conditions, one wishes to estimate the distribution of traffic flow. Whether one street is preferable to another depends not only on the quality of the road but also on the density of the flow. If every driver takes the path that looks most favourable to him, the resultant running times need not be minimal. Furthermore, it is indicated by an example that an extension of the road network may cause a redistribution of the traffic that results in longer individual running times.”

Motorways and bypasses generate traffic, that is, produce extra traffic, partly by inducing people to travel who would not otherwise have done so by making the new route more convenient than the old, partly by people who go out of their direct route to enjoy the greater convenience of the new road, and partly by people who use the towns bypassed because they are more convenient for shopping and visits when through traffic has been removed.

This is just the tip of what appears to be a mountain of evidence and thought into why building more roads rarely solve traffic issues, moreover is can cause a worsening effect.