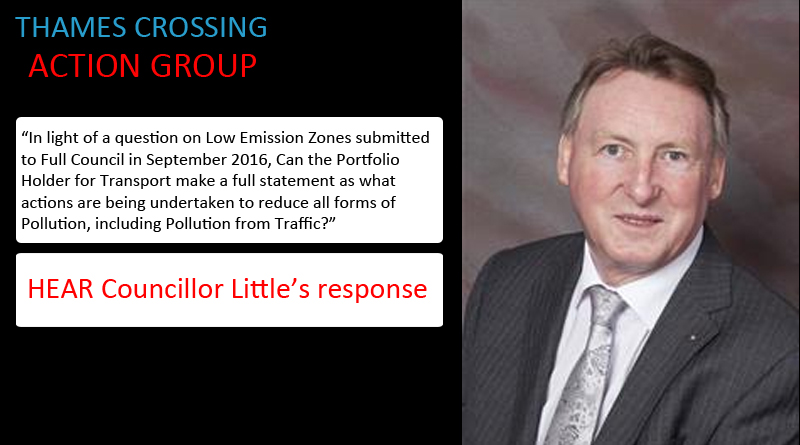 As you will know we asked a question at the Full Council meeting on 27 Sept 2017, this is where you can hear  TCAG Pollution question answered by Councillor Brian Little.

and/or read the minutes for the question and answer…

“In light of a question on Low Emission Zones submitted to Full Council in September 2016, Can the Portfolio Holder for Transport make a full statement as what actions are being undertaken to reduce all forms of Pollution, including Pollution from Traffic?”

For reference the question that TCAG asked in Sept 2016:
“With an increasing number of Heavy Good Vehicles using Thurrock’s road network and a linked decreasing air quality (in recent years illustrated by increasing Air Quality Monitoring in the Borough). Will the Council introduce a Low Emissions Zone for Thurrock, following the lead of many neighbouring London Boroughs?”

“The Air Quality and Health Strategy were approved at Cabinet in December 2016, which contained an action plan of initiatives which will help air quality in the Borough.  the strategy can be found on the Council’s website for further information. (This can be found in Point 68 on this link)

Since then, the actions set out in Section 4.2 of the report have been progressed.  A programme of weight restrictions and advisory HGV routing has been progressed across the borough.  Following various bilateral initiatives with private sector and police partners, the Council is re-launching the Freight Quality Partnership in October, with particular emphasis on encouraging more responsible behaviours from HGV drivers in avoiding, where possible, residential areas.

Variable message sings to advise traffic of network problems and advise on alternative routes have been installed.

On the 15th June, the Council ran a pilot programme to tackle idling outside of schools which was attended by myself, together with the Public Health, Strategic Transport and Road Safety Teams.  The scheme engaged with two schools, Purfleet Primary and Woodside Academy.  The purpose of this project is to engage with parents who leave their cars running outside the school gates at pick up and drop off and make them aware of the impact on the health of the children and the environment.

As part of Thurrock’s preparation for engagement with Highways England on Lower Thames Crossing, the Council is currently developing a position statement on all environmental pollution in Thurrock.  A more detailed update on air quality management will be presented to Cleaner Greener Overview and Scrutiny at their October meeting.”

TCAG were then allowed a supplementary question

“I feel most Thurrock Residents want Thurrock to be seen as a Forward Thinking & Progressive Council, what are the future Plans and Actions to reduce & possibly eliminate Traffic Pollution, as large areas of Green Belt Land maybe lost to Roads, Homes, Businesses, etc,?”

“Thurrock has been in dialogue with Transport for London over the last year regarding the operation of their existing Low Emission Zone and their plans to roll out Ultra Low Emission Zones by 2020.  We are keen to learn from London’s experience, but are mindful that Thurrock has a very different pattern of trip making and vehicle usage.  Rolling out a London style Lower Emission Zone in Thurrock is not a viable option at the present time.