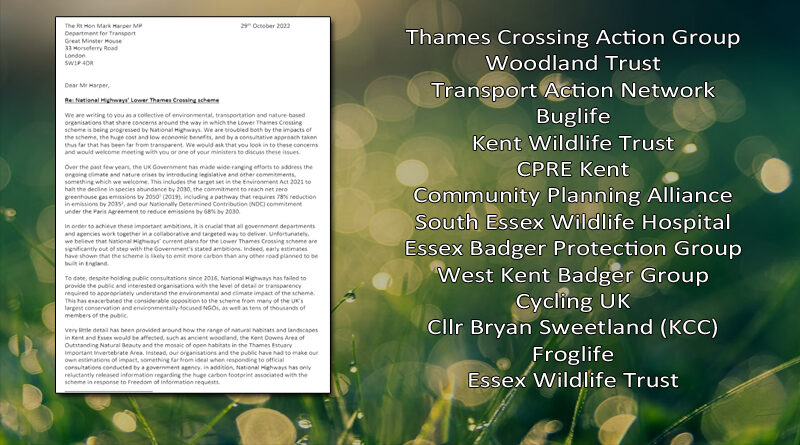 Thames Crossing Action Group are proud to be part of the conservation coalition who have recently sent a joint letter to Government regarding the environmental impacts of the proposed Lower Thames Crossing, calling for an immediate review.

It is not an easy task to organise and co-ordinate so many different organisations and people to agree on wording etc for joint letters like this, but with everyone so seriously concerned about the environmental impacts of the proposed LTC it made perfect sense for us to unite.  As we at TCAG always say, together we are stronger!

We thank everyone who has been involved in preparing and working on this joint letter, and were proud to be the ones to actually send the joint letter to Government.

Copy of the letter


Quotes from some of those who signed the joint letter

Jack Taylor, Lead Campaigner, Woodland Trust: “The loss of irreplaceable habitats and living legends is unacceptable. We’re fighting both a nature and climate crisis, and destruction of ancient woodland and veteran trees for a road scheme beggars belief. To make matters worse, we’re still waiting to find out just how much the scheme will impact our natural environment. National Highways has not disclosed details of which environmental features will be affected. Hiding these impacts from the public until the DCO stage is totally unacceptable.”

Craig Macadam, Conservation Director, Buglife: “We’ve seen so many important habitats for insects and other wildlife lost in the Thames Estuary in recent decades and the Lower Thames Crossing is potentially the biggest and most impactful of them all. The nationally important invertebrate populations in the estuary are once again under threat and it simply cannot be right for a decision to be made without all of the information being available.”

Hilary Newport, Director, CPRE Kent: “CPRE Kent has been frustrated by the lack of key information provided every stage of the consultation process. The last statutory consultation was back in 2018 and since then there have been multiple design changes. It’s not reasonable to expect a project of this scale to go to examination without full detail of its impacts.”

Chris Todd, Director, Transport Action Network: “The latest evidence is that the UK is widely off target in meeting its climate change ambitions to cut carbon emissions quickly enough. Road schemes like this simply are not an option in a climate emergency. They are making the problem worse and need to be scrapped.”

Laura Blake, Chair, Thames Crossing Action Group: “The proposed LTC is a hugely destructive and harmful project on so many levels; it fails to meet the scheme objectives, and would not solve the problems associated with the Dartford Crossing – it is simply not fit for purpose. We are strong believers that ‘together we are stronger’ and we are proud to unite with so many others to voice our serious concerns, and to call on Government for an immediate review of the project.”

Paul Hadaway, Director of Conservation for Kent Wildlife Trust said: “Kent Wildlife Trust share the concerns of other organisations that, given the lack of detailed information made publicly available, the LTC development will be harmful to wildlife, the environment and the population.

“Ploughing ahead with the proposed LTC will result in the loss of irreplaceable habitats, including ancient woodlands and wetlands which are locking up significant levels of carbon, going against the government’s commitments to the environment.

“At a time when Kent is increasingly facing the pressure of development, to proceed without the full impact of this project being made public is utterly unacceptable. It shows a disregard for the important role that the impacted habitats play in protecting Kent and it’s population from the worst impacts of climate change.”

Jeremy Dagley, Director of Conservation, Essex Wildlife Trust: “Essex Wildlife Trust is fundamentally opposed to the plans for Lower Thames Crossing. We have serious concerns about the significant impact of current proposals on the wildlife of Essex, with direct loss of habitats for species already under threat and damaging indirect impacts from fragmentation of sites, noise, light and air pollution. Such massive new road developments should be considered as a last resort and then only as part of a coherent sustainable transport strategy. This should be strategically planned and fully integrated with conservation objectives and the land use planning process. We need to be focusing on promoting less carbon-intensive forms of transport, reducing private vehicle use, and ensuring that nationally significant infrastructure projects result in no net loss to biodiversity. The proposal for Lower Thames Crossing is currently based on outdated thinking.”

Together we are stronger!

Response to our joint letter