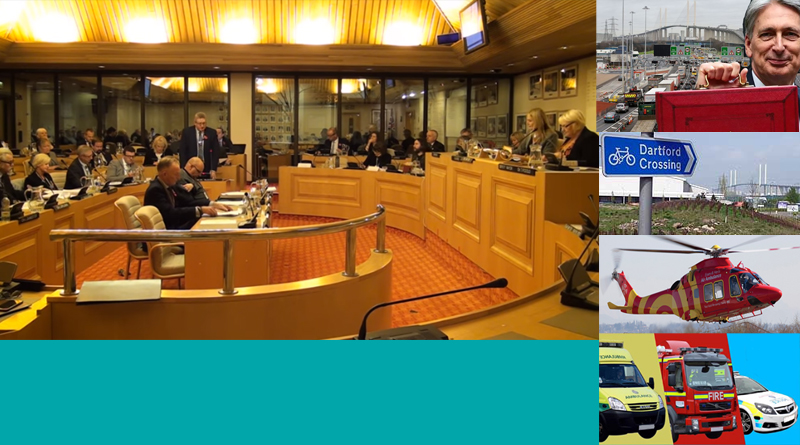 Another consultation update for you, and it’s another one that you need to be sitting comfortably for! It comes in no particular order, just as we have grabbed it from our many notes from recent HE events.  Ready?  Here we go!!

The recent Budget announcement announced that the Government are abolishing PFI and PF2 (the private funding schemes).  Among many projects  the proposed Lower Thames Crossing was one that was meant to be funded using these schemes.

Originally the tunnel section had been proposed to be public (taxpayers) money/funding, with the rest of the route being funded with private money.  Since the budget announcement this has all changed.  We asked Highways England at the Blackshots Info Event how the LTC would now be funded, and they confirmed it will all be funded with public money.

So £6.8bn of tax payers money, or more if the cost rises (as often happens with projects like this, as we all know) spent on a project that will not solve the issues we all suffer with north and south of the river due to the Dartford Crossing, and will bring more congestion and pollution to the areas along and surrounding the route.

This has also since been confirmed in articles like this – Highways Magazine.

Consider the impact LTC will also have on our emergency services.  For instance if there is an incident on the LTC and fire brigade were needed, how would they access the LTC?  Orsett Fire Station would have to go all the way down the A13 Eastbound to the Stanford junction, up and around the roundabout, and then back westbound on the A13 to the LTC junction as things stand at the moment.

How busy will the A13 get with all the extra traffic detouring to the Stanford junction, and how will that impact ambulances in and out of Basildon Hospital?

Plus imagine how gridlocked LTC will become if there is an incident, and with no hard shoulders how hard access could be for emergency vehicles, especially with the length of route between junctions, especially for the stretch between the A13 and the M25 junctions for example.  A stretch that happens to be prone to high winds and lingering fog that is likely to cause accidents/incidents.

To be clear they have also mentioned that it is common practice to add special emergency vehicle access slip roads, and evidently that is something that could happen at the Orsett Cock for example for the fire brigade.  The slip road would be gated so purely for emergency vehicles.  However, we would again have hoped to be at a stage by the time we’re in consultation that vital decisions like this were further progressed since we are talking emergency vehicle access.

This isn’t just about access to the LTC for our emergency services but also how it impacts them in our local area too.  We rely upon and appreciate these amazing men and women when we are facing tough and scary times in our lives, we need to be sure we do all we can to ensure they are in a position to keep doing the great job that they do. So please consider the impact on our emergency services when completing your consultation response.

Currently cyclists that want to cross the river at the Dartford Crossing can use a free service to get across.  Details for those interested can be found here – www.gov.uk/dartford-crossing-bike.  Basically you phone ahead and request a pick up they send the truck, and take you and your bike safely across the river.

We asked HE if this would be a service that is being considered at the LTC.  Due to LTC being a motorway it will not be a route for cyclist so this is not a service that is being considered.  Obviously, cyclist are not allowed on motorways, but this is another example of how LTC doesn’t take into account more sustainable options.  Again something to mention in your consultation response maybe?  The Government keep talking about the need to encourage sustainable travel, yet are happy to spend £6.8bn of taxpayers money on a crossing that will limit sustainable travel.  Anyone wishing to cycle will only have the option to cross the river by using the Dartford Crossing  or Tilbury/Gravesend ferry.

We have asked HE about the crossing charge for LTC.  As you probably already know, info on this is very limited, and the general response is they want to hear back from people in the consultation regarding this, and nothing has been decided yet, other than there will be a charge and it will be variable and operate in a similar way to the Dartford Crossing with number plate recognition technology.

Will DartCharge users be able to also cross at LTC on same account?  Will local resident discount scheme also cover residents for both crossings on the same account and at no additional cost to the annual charge?  All things to consider when responding to the consultation.

Dartford Tunnel closing for 2 years after LTC opens?  Give us evidence!

We have heard from many different directions that you are hearing about one of the Dartford Tunnels being closed for 2 years for crucial repairs after LTC opens.

We  asked HE and they spoke to someone from Connect Plus who deals with the Crossing maintenance and they said this is not the case.

This rumour is something we are hearing from so many different directions now, if any of you have evidence please do share it with us.  We have also asked the Council if they are aware or can find anything out, there is also at least one local journalist investigating!  Please send any evidence to admin@thamescrossingactiongroup.com Thanks

We have heard mentioned from a certain direction, that the rest/service area might be a picnic tables/washroom type set up.  We have quizzed HE on this and can confirm this is not the case, it will be a full Service Station, with fuel station, food outlets etc as you would expect from a motorway service station 24/7.

To clarify the Secretary for State would purchase land, and then they lease to provider such as Moto, Welcome etc for the service station.

Also to clarify that HE could still potentially move the Service Station to a different location, so don’t think you have escaped that horrible part of the LTC if you don’t live near East Tilbury, as it could still be moved after consultation.

At a recent HE event in Tilbury we asked their Environment team about air pollution in the area and impact the LTC would have on air quality, especially considering we already suffer with illegally high levels of air pollution in Thurrock and other areas.  They commented that there are no illegally high levels in Thurrock, and they won’t go over the legal limit with LTC.  One of our team who has completed the Client Earth Air Quality test kit told them she had done the test, and had a report to say it is illegally high outside her property, their response was that she should send the proof as part of her consultation response.

It is unbelievable that HE haven’t acknowledged the illegally high levels.  So keep quizzing them on it at events.  If you managed to get one of the air quality test kits from Friends of the Earth or Client Earth and got an  illegally high readings report, remember to include a copy in your consultation response!  Sadly neither Friend of the Earth or Client Earth currently have air quality test kits available at this time.

A lot of you have been telling us that you don’t think the length of the consultation is long enough to read through all the thousands of pages of documents, and get all the answers to your questions or be able to respond adequately to the consultation.  If you feel this way the best advice we can offer is to email HE info@lowerthamescrossing.co.uk and let them know and ask them to consider extending the consultation.

We have to stress that the end date for the consultation still stands as Dec 20th, so we need to try and aim to get all our responses back to HE by that date to be included.

You can take part in the consultation online – http://lowerthamescrossing.co.uk/haveyoursay

On Weds 31st Oct at the Thurrock Council Full Council Meeting a motion was passed to support the Council taking judicial review and/or legal action against Highways England with regards to the proposed Lower Thames Crossing.

Obviously we are pleased with the outcome of this motion, and the fact that it is backed by all members of the Council.

We are aware of others who are taking judicial review and legal action against HE, including South Downs National Park and a resident Dr Emma Tristam in Sussex who have been granted judicial review against HE regarding HE’s destructive A27 project.

Roger and Laura (Chair and Vice Chair of TCAG) are looking forward to meeting with Dr Emma Tristam and other members of the A27 Arundel Bypass Neighbourhood Committee on Nov 20th.

Please do consider reading about their fight, and supporting them in any way you can.  Sadly, HE have destructive plans all over the country and we all need to fight them together, as there is strength in numbers, and they have to be stopped.  The destruction is bad enough as it is, but this is pointless destruction and has a huge price tag on top of the tax payers money that is being used, there is the cost to our lives, health, homes, greenbelt, forests, communities, agricultural land, wildlife, and so much more.