Some may be wondering why we are publishing an update about info from the London Resort (theme park) consultation.  Well it’s because of the issues of London Resort and LTC.

You might have heard of London Resort, a theme park proposed for the Swanscombe Penninsula.  You may be more familiar with it as Paramount Pictures theme park, as that was a previous variation, it’s now called London Resort.  Don’t ask us why, when it’s in Kent not London, we’re none the wiser either!

Anyway, London Resort are holding a consultation at the moment, and plan to submit their Development Consent Order (DCO) later in the year just like LTC.

As London Resort have not yet submitted their DCO application, they clearly haven’t yet been granted a DCO.  The relevance of this is because unless a project/development has a DCO or planning permission HE/LTC do not take it into account with their plans and traffic modelling data etc.

Yes you read that right, HE/LTC have not taken into account the London Resort, a project which is considered a Project of National Significance in it’s own right, because it hasn’t yet been granted a DCO.  None of the traffic modelling that HE/LTC have considered and presented at consultations has included any of the predicted traffic levels or any other impacts London Resort would bring. 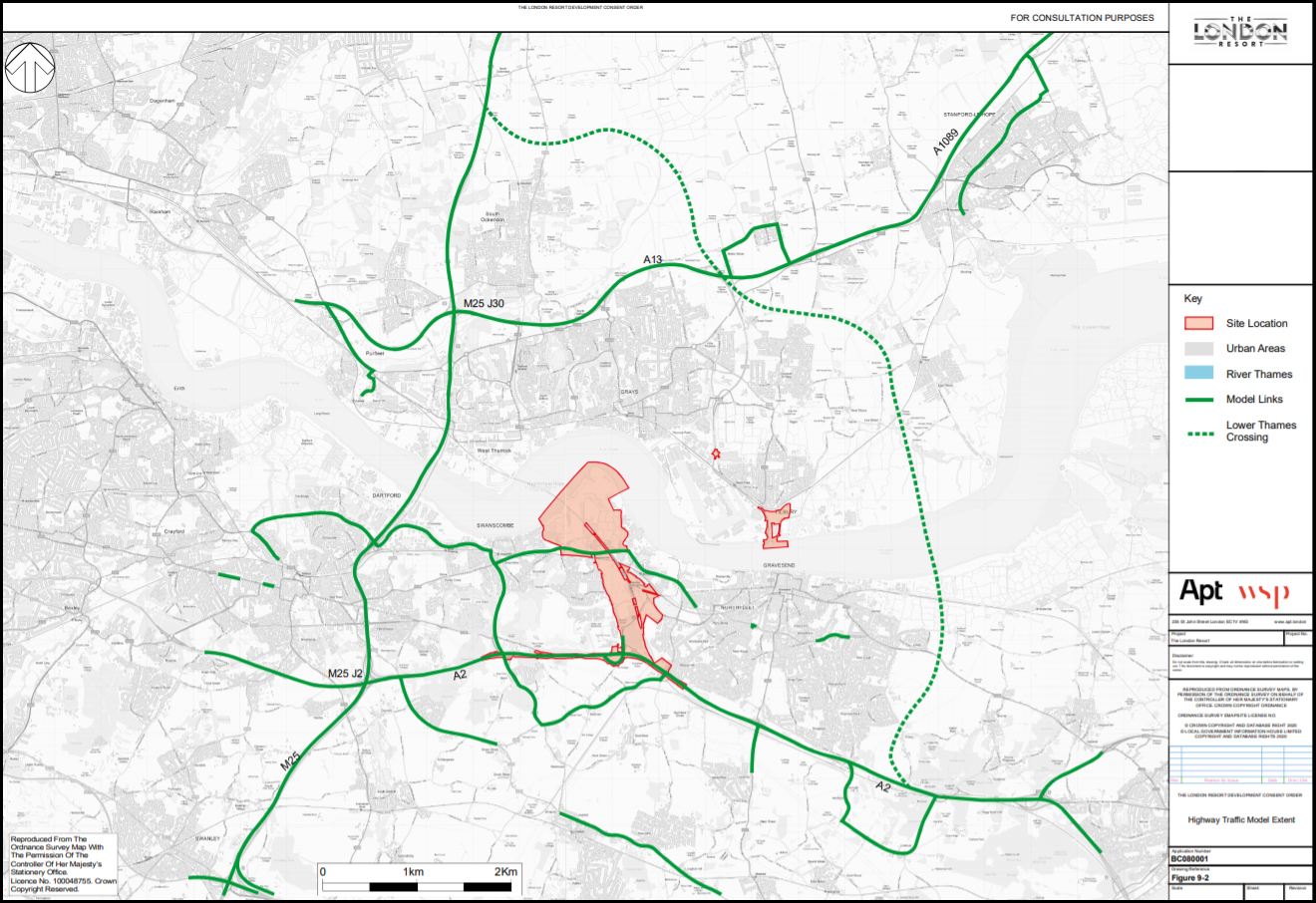 As can be seen above London Resort does refer to LTC in it’s consultation materials and says it is taking it into account in it’s planning.  Why one will take the other into account but not the other way around it beyond us!  We’d also say that whilst London Resort say they are taking LTC into account in their plans, clearly they are not knowledgeable enough on the topic to realise the issues.  Maybe they have just trusted what HE have told them rather than actually research it fully as we do, because there would be issues!

When viewing the map above please don’t ask us what a ‘model links’ means, why Baker St, High Rd, and Rectory Rd in Orsett are highlighted, why the A13 near Stanford-le-hope is labelled as the A1089, or indeed why the actual A1089 connecting to the parking facility area of the London Resort development boundary has not been highlighted.  We don’t know, but we are contacting London Resort to try and find out!

What do we see as some of the issues

There are of course the obvious issues and impacts, especially those you would expect for a theme park project of this size, such as the increase in traffic, the land take, impact on the environment etc.

London Resort is proposed to be built on the Swanscombe Penninsula which is in Kent, and is positioned between the Dartford Crossing and the proposed LTC.  Some would say the location is the reason why all variants of Route B of the LTC were ruled out back in the day.

Let’s take into account the fact, as we all know, that HE/LTC have also not taken into account how traffic will migrate between the two crossings when there is an incident.

So if there is an incident at the Dartford Tunnels and traffic wants to use the LTC instead it would all bottleneck into just 1 lane to get off the A2 onto the LTC.

If there is an incident at the QE2 bridge, it is closed due to high winds, and the traffic wants to use the LTC instead, if it tries to cut down the A13 eastbound it will have to go all the way down to the Stanford junction, up around the traffic lighted roundabout, and then back westbound to the LTC sliproad which is just past the Orsett Cock roundabout.  Note that because the new sliproad from the Orsett Cock roundabout onto the A13 westbound doesn’t merge onto the A13 until after the LTC sliproad, traffic cannot access the LTC/A1089(south) from the Orsett Cock junction. We often refer to this as the Stanford Detour – www.thamescrossingactiongroup.com/the-stanford-detour/

If traffic tries coming off the M25 onto the LTC, the M25 at that point will be 5 lanes of traffic and the LTC southbound between the M25 and A13 is now proposed to be 2 lanes.

If the LTC junction on the M25 starts to build up traffic will most likely try cutting off at J29 onto the A127 or J28 and through Brentwood, all hoping to cut down the A128 to the Orsett Cock.  As outlined above they will then all have to use the Stanford Detour because there is no access onto the LTC from the Orsett Cock roundabout.  See our update on that here.

Now imagine that amongst all this there will be all the additional London Resort Traffic too, which HE/LTC have not taken into account!

Plus, if you start digging through the London Resort current consultation materials you will notice that they are also now proposing a 29.9 hectares  site including up to 3 multi storey car parking buildings for 2500 car spaces and 55 coach spaces, as well a facilities such as retail and catering amenities to the east of Tilbury .  So those arriving in cars and coaches etc will be able to park their vehicles at the car park facility north of the river and use a boat service across the river to the theme park in Kent, which they refer to as Park and Glide. 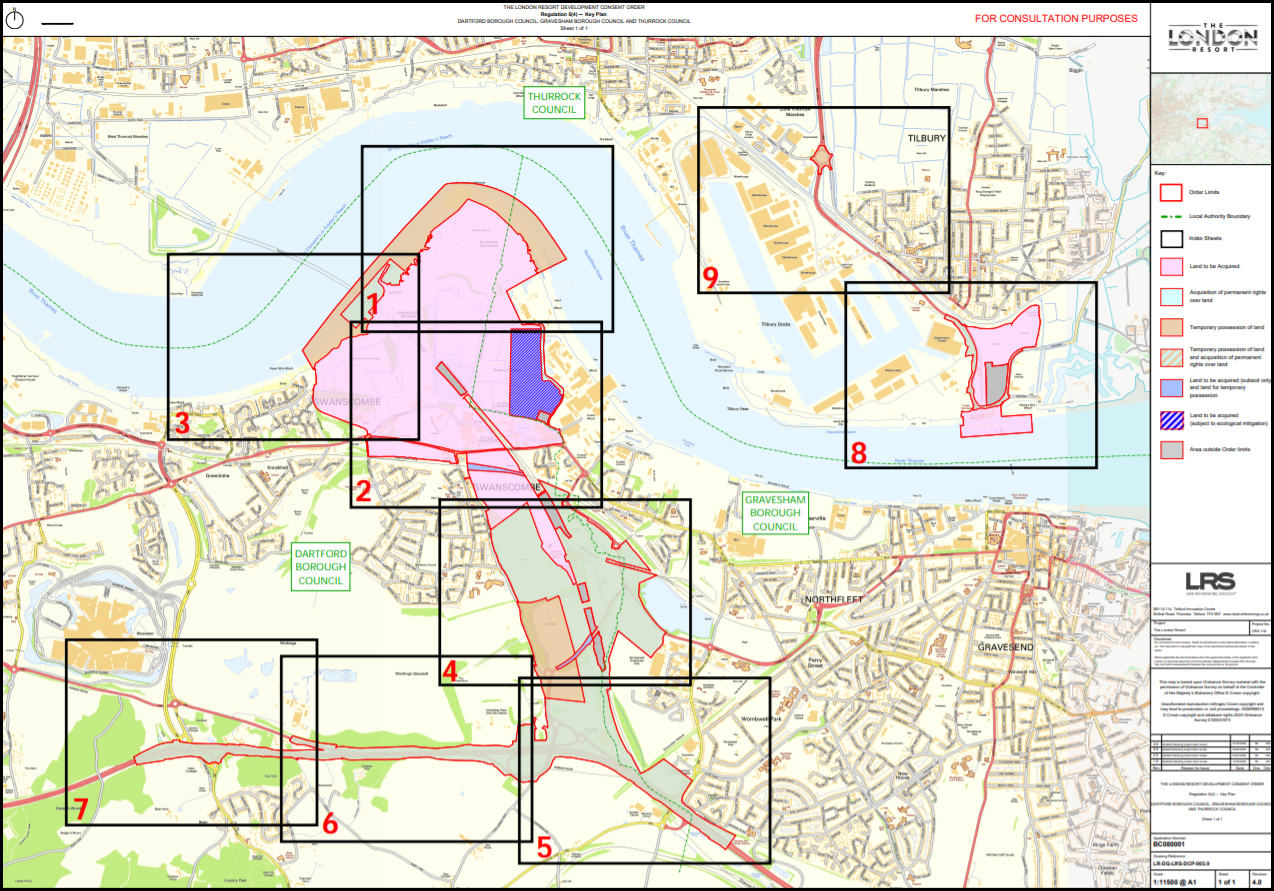 The access to the London Resort car parking facility would be via the A1089 southbound.

Either way there will definitely be an increase in traffic in the Thurrock area, and possibly further afield north of the river (when there are incidents) if the London Resort goes ahead, particularly because HE are not taking it into account with LTC plans.

Time line for both projects

As we mentioned above both projects are aiming to submit their DCO applications in later this year.

If they are granted their DCOs, both are aiming to start construction in 2022.

Imagine all the construction being carried out at the same time. Then ask the question of how London Resort traffic trying to access the A1089 south to use the car park facility in Tilbury will manage with all the LTC construction taking place?! Also take into account disruption to the Tilbury Ferry service and how that could add more traffic to the roads if the ferry service is limited whilst this facility is developed.

Oh and there is also still the possibility that the Tilbury Link Road that was removed from the LTC project, and is now a separate standalone project in the pipeline for Road Investment Strategy 3 (2025-2030) could get thrown into the equation too don’t forget. Plus, whilst we are not saying this is definitely happening, it has crossed our mind to wonder whether the rest and service area that was removed from the LTC project, but is still being considered as a separate stand alone project could again become viable in the East Tilbury/Tilbury area if London Resort goes ahead due to the increase in traffic/visitors to the area.  To stress we are not saying this is definite, we are just sharing our thinking of possibilities that have made us wonder.

We all know only to well how bad it gets when there are incidents, and all the rat running that occurs when there is an incident at the Dartford Crossing/M25/A13/A2 areas. The fact that HE are not factoring in how traffic will migrate when there is an incident at either crossing, and that there are not adequate connections in place.  Plus they are not factoring in the additional traffic that London Resort would bring, both sides of the river. Or how traffic will access the London Resort car parking facility in Tilbury, means that we will be expressing our serious concerns in both consultations, and encourage everyone else to do the same!

Have your say in both consultations

Even though HE/LTC are not asking for comments on London Resort, and refuse to take it into account in their planning it doesn’t mean to say we can’t express our concerns!  If you are using the official consultation response form (either online or paper form) the ‘Other comments’ section is the place to tell them what you think about anything that is not covered in the rest of the form!  Feel free to add additional pages if you need to, just be sure to label the pages with which question you are responding to, and maybe number them if you need to, so as to ensure they can read your comments in the order you intend to make them!

Please also bear in mind that we would advise you viewing the London Resort consultation materials yourself for further info on other aspects, as we have tried to bring you some of the impact we can see in relation to LTC, rather than of the project as a whole.